Hunter’s victory means that he is qualified for the 2020 Mr. Olympia, bringing the Labrada name back to were it belongs, on the Mr. Olympia stage.

Lee Labrada’s final Olympia competition was in 1993, when he placed fourth. Now after 27 years, Hunter brings back the Labrada name back to the Mr. Olympia list of competitors.

Hunter’s father, Lee Labrada is a bodybuilding legend. He pushed Lee Haney to the edge in 1989 and 1990 to almost winning the prestigious Mr. Olympia title.

Hunter is a true example of what bodybuilding should be. He earned his pro card in 2018 at the NPC Nationals and did not rush to get on the pro stage.

As well, Hunter had to recover from surgery as he explained to Ron Harris.

With perfect planning, Hunter improved his physique to the point were he can actually go up against the best of the best on the professional bodybuilding stage.

Originally, Hunter was planning to make his pro debut at the 2020 New York Pro, but unfortunately that had to be cancelled due to the Covid-19 threat.

Focusing on Tampa, Hunter made sure his physique and posing routine was on point to take home the top prize.

Presenting a much bigger physique compared to what his father brought to the stage, Hunter still managed to put together a well balanced physique. Smooth transitions during his posing routines showed how he made sure every aspect of his prep was perfect.

Second place went to Canada’s Iain Valliere. Iain was presented a very dry physique. He was in great condition and he was also a favorite to win the show.

Continuously being compared to Hunter, the judges had the difficult task to see who is the best between the two.

The Women’s Fitness category unfortunately only had six competitors. Ariel Khadr finished on top to also earn her 2020 Olympia qualification.

The same cannot be said for the Women’s Figure category as 26 competitors went head to head for the top prize.

LaToyia Farley was announced the winner at the end of the battle. Mexico’s Sandra Grajales took home second while Donja Jackson had to settle for third.

The Bikini lineup looked to go on forever. A nightmare situation for judges as they had to pick from a line up of 39 competitors.

The top prize and Olympia qualification would be won by Canada’s Jennifer Dorie. Finishing on top in this category is a fantastic accomplishment.

The Wellness division is a new discipline for the NPC/Pro League, but it has been added to the contest lineup with the IFBB (Rafael Santonja) for the past couple of years.

Still new to the NPC/Pro League, the Wellness division still has to gain momentum.

The winner will qualify for the 2021 Olympia Weekend.

Seven competitors were in the lineup at the Tampa Pro with Renee Harshley winning the event. 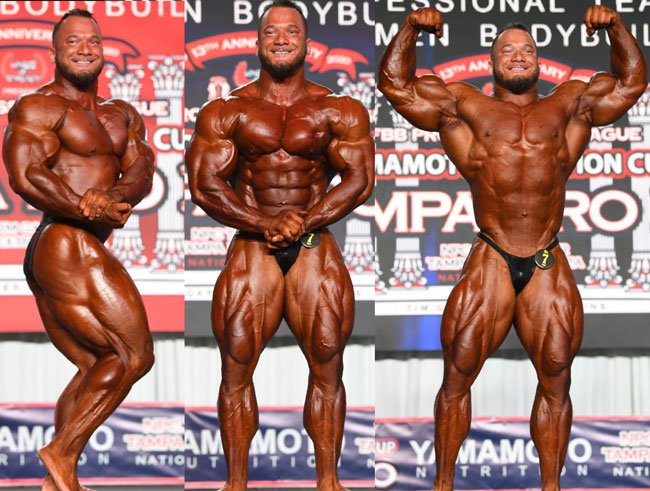 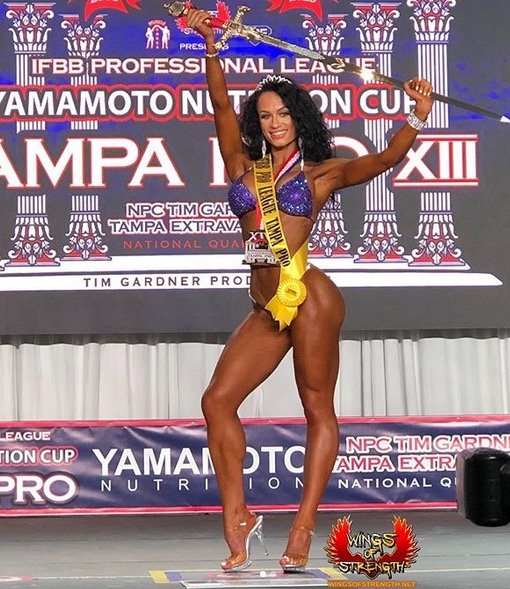 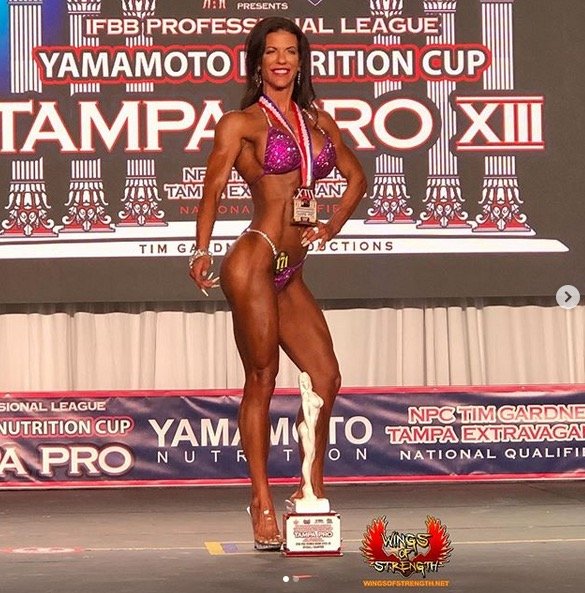 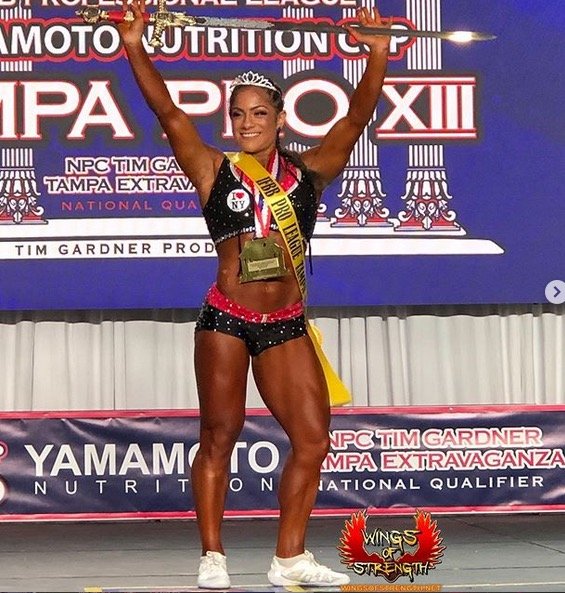 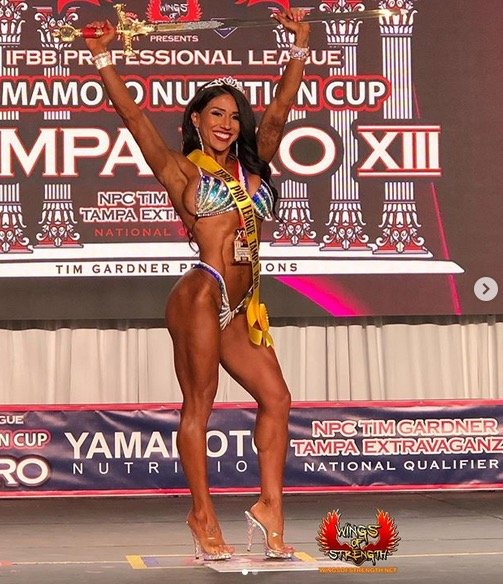 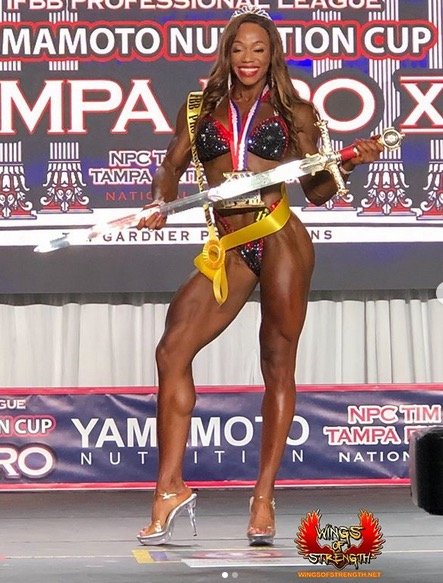 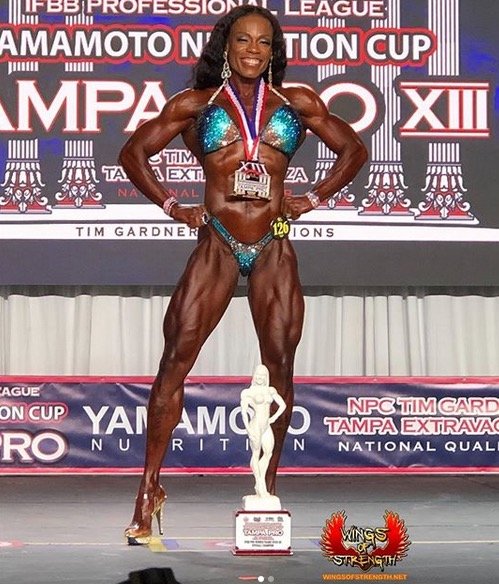 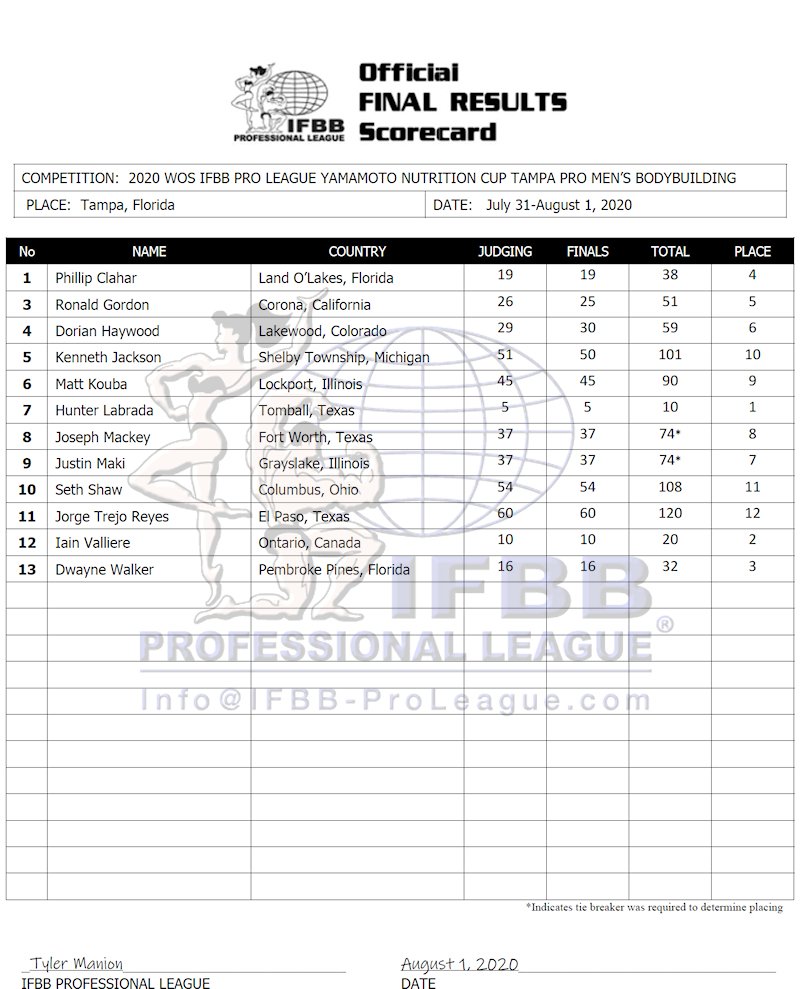 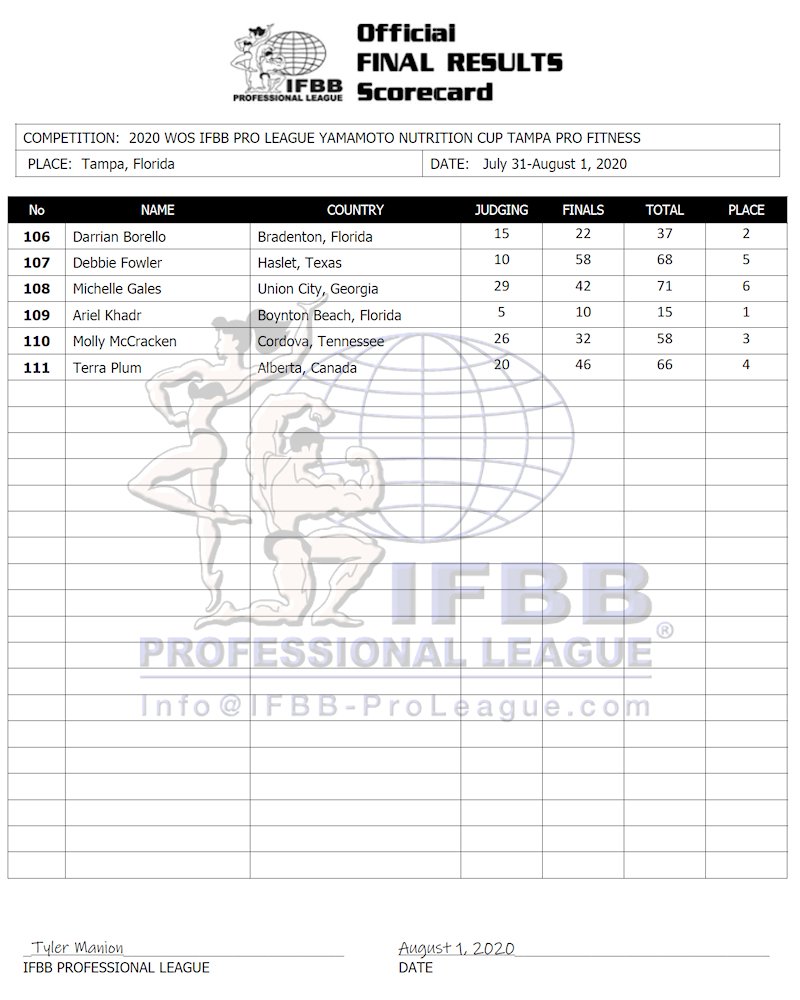 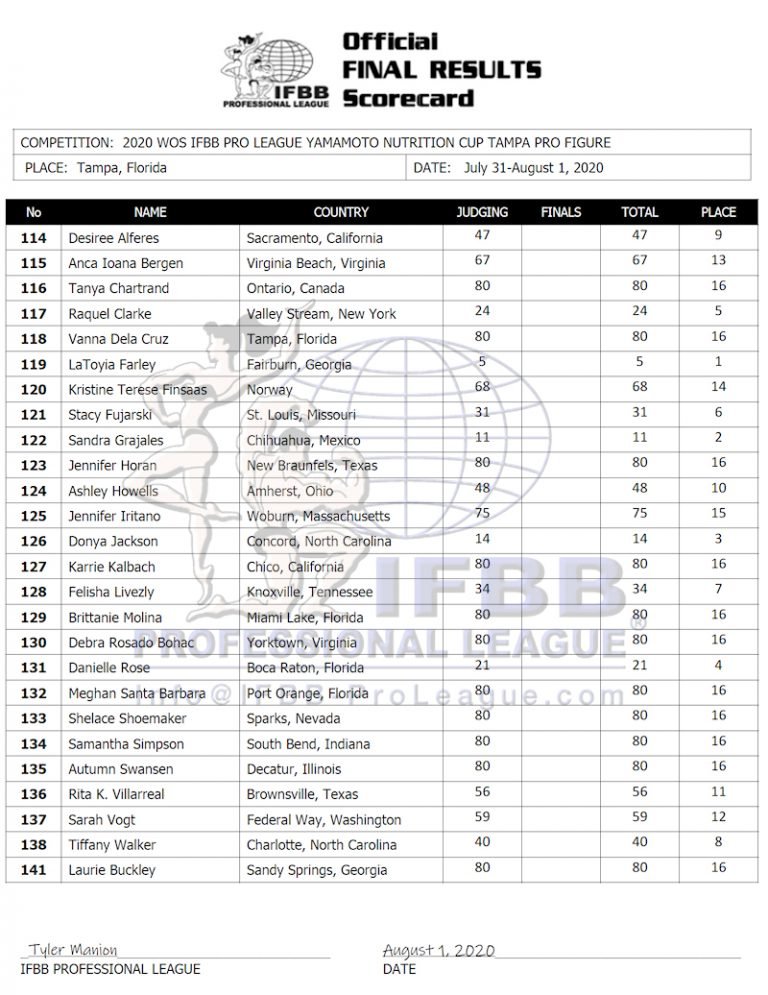 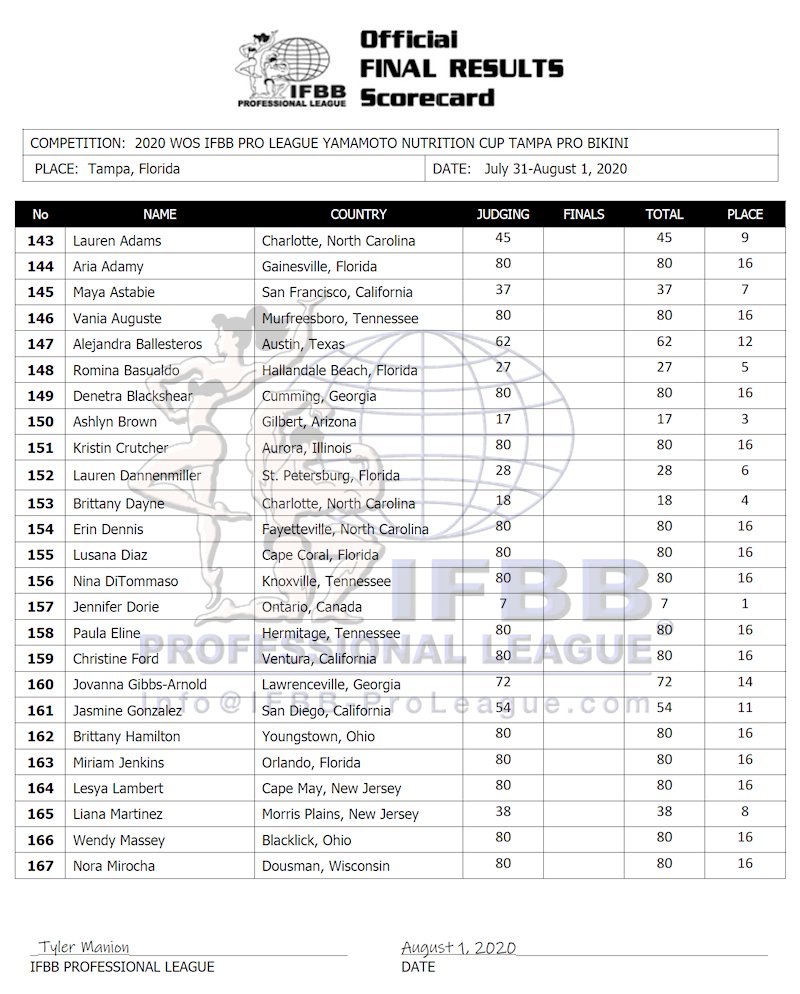 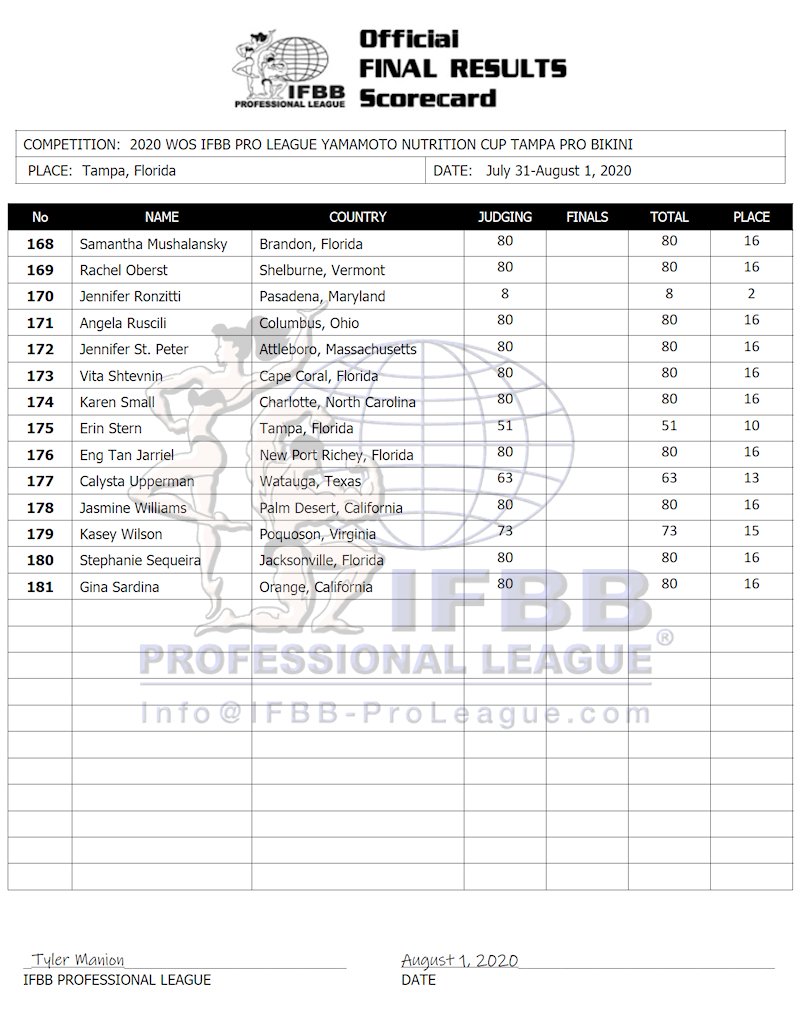 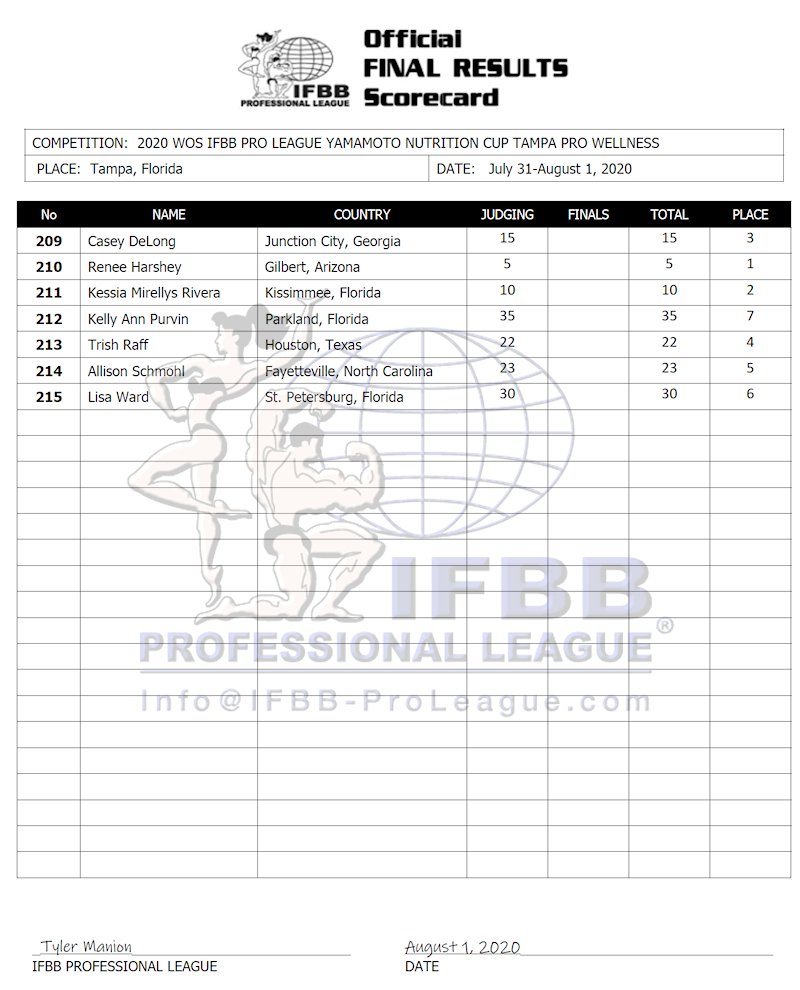 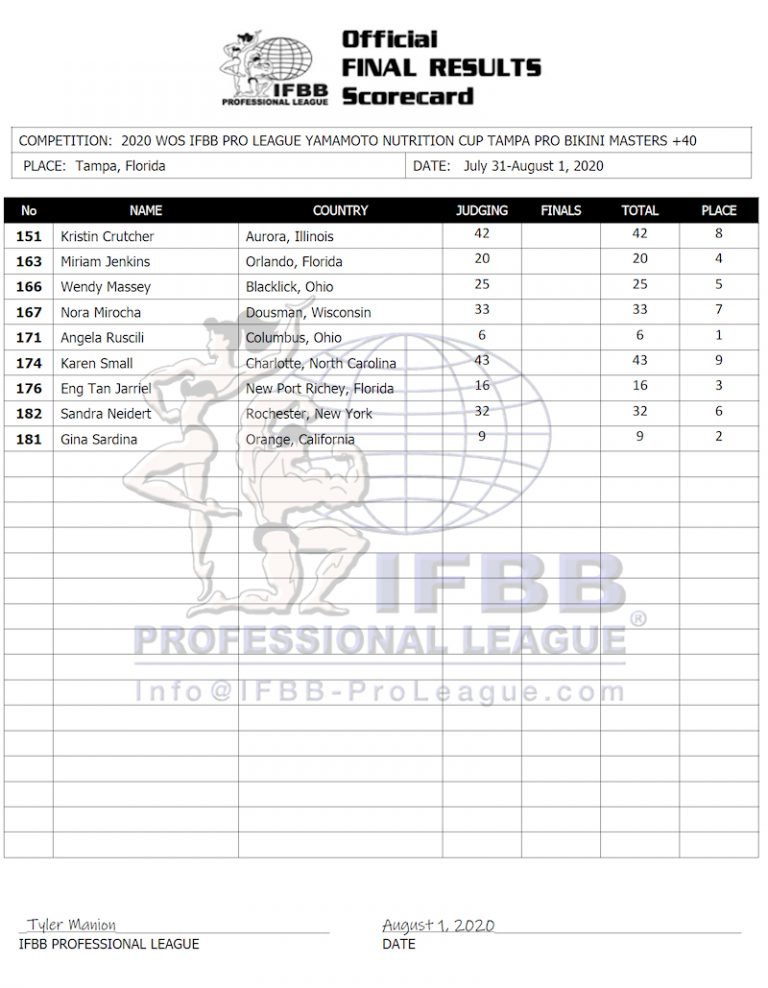 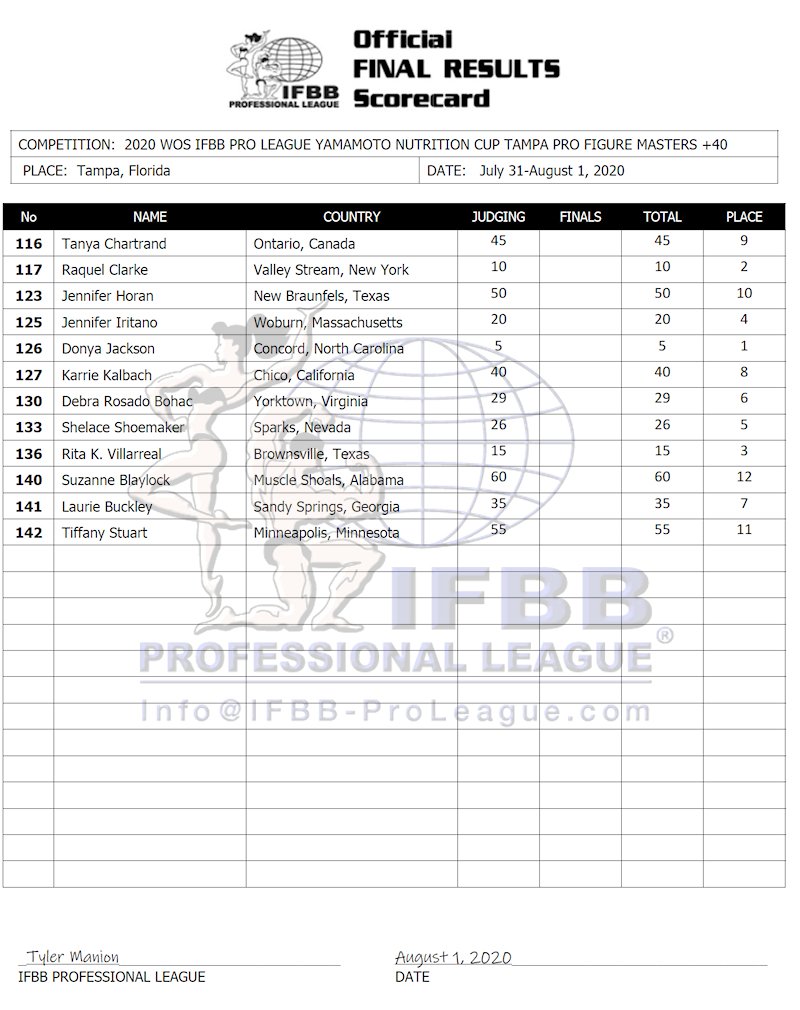