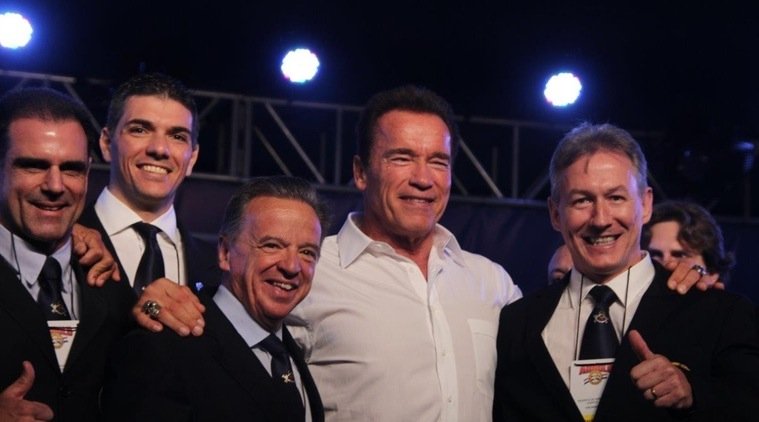 The upcoming weekend, April 25-27, will be very important to the IFBB worldwide family, particularly to the Western Hemisphere. Rio de Janeiro, Brazil, will host the 2nd Arnold Classic South America. Following the last year’s successful opening, which was dominated by Brazilian athletes, what was a natural consequence of the inaugural event hosted by this country, now it has expanded to a big international contest with over 20 national teams in bodybuilding and fitness only. This year we can see, for the first time, competitors from the USA, Canada and several Caribbean countries.

Arnold Classic South America has become a multisport festival, including over 30 sport disciplines! Beside Bodybuilding and Fitness, it will embrace our “brother” strength sports: Powerlifting, Strongman and Tug of War. The next big group is Martial Arts, with 8 sports. Then Pole Fitness, Artistic Gymnastics, Jump Rope, Indoor Rowing (Concept 2 machines). Also some “extreme” and endurance sports (Mountain Biking) as well as intellectual sports (Chess).

The main activity, including bodybuilding and fitness, will take place at the “Riocentro”

Governor Arnold Schwarzenegger and the top IFBB officials, including President Santonja, are coming to Rio to celebrate the 2nd edition of this quite “young” event with tremendous perspectives and to control the IFBB activity there. Brazil is a very active IFBB member in the recent years. Despite this Arnold Sport Festival, Brazil will host the 2014 IFBB World Men’s Bodybuilding Championships and IFBB International Congress later this year in the capital city of Brasilia.

MEN’S BODYBUILDING:
Charles Mario Soares (85 kg) – didn’t participate last year but having two wins at the Arnold Classic USA and placing 2nd this year in Columbus he may be considered the biggest star in Rio this year.

Djalma Laroque (100 kg) – last year’s winner coming to regain the title. He was in a perfect condition at the 2014 Arnold Classic USA in Columbus (2nd place).

Isequiel Balbi (90 kg) – last year’s 80 kg class winner, who finished 2nd in Columbus in 2013 and 2014. Now in the heavier category, where he will meet last year’s runner-up from 90 kg class Agostinho Figueiredo and finalist Marcelo Calvas.

Francisco De Assis (75 kg) – 4th place last year in Rio and 4th place this year in Columbus. It’s time to enter the top three or maybe even to win this category.

Diego Nonato (80 kg) – last year’s runner-up. This year, with Isaac Balbi moving up to the next class, he will be the main pretender to the title; however, the next finalists from the past year: Josevan Clemente and Antonio Inácio will try to stop him.

Daniel Luna (65 kg) – 2012 World Championships bronze medal winner from Ecuador will be one of the biggest stars in Rio this year.

WOMEN’S BODYFITNESS:
Rosimar Lopes (up to 163 cm) – 2013 South American overall winner and Women’s Worlds finalist, having won this year’s Arnold Classic USA will be the brightest woman star in Rio this year. But she will meet in this class the next great star: Nora Martinez (Paraguay) – 2010 South American overall winner and two-time Arnold Classic USA finalist (2013-2014). The next big player will be Loreto Soto Nunez (Chile) – South American master bodyfitness champion, who placed ahead of Martinez in the overall!

Renata Guaraciaba (over 163 cm) – after many years on the stage, she finally started to win contests. Having won this year’s Arnold Classic USA, she would be the main pretender for the trophy but will be challenged by the last year’s winner Nicole Eccel and two 2013 South American champions: Karent Perez (Venezuela) and Eliana Romano (Argentina). So many champions in one category!

Marcia Goncalves (over 163 cm) – coming as the 2012 Arnodl Clasisc USA runner-up and Arnold Europe 3rd place winner she will be the main candidate for the top trophy; however, she will have to leave behind last year’s runner-up Josiane Weber, 2013 South American runner-up Bianca Lanza and 2014 Arnold USA top 10, Alzira Rodriguez (Dominican Rep.).

MEN’S CLASSIC BODYBUILDING:
Rodrigo Coelho Alves (up to 175 cm) – comes in a glory of the 2014 Arnold Classic USA winner. After his 2nd place last year in Rio, he will try to get this title this year. But will have very demanding opponents: Marcelo Rafaelli, who won in Columbus in 2009 and placed 2nd this year, just few points behind Alves, and Renato De Oliveira, who was tied with Alves last year in Rio. Three top champions and only one can win!

MEN’S PHYSIQUE:
Caio Pannain (up to 175 cm) – finishing 2nd at this year’s Arnold Classic in Columbus he confirmed his great predispositions but will have a “cloud” of other good athletes like 2013 South American champion Dilson Espindola, last year’s runner-up Diogo Montenegro and 4th place winner Diego Gil.