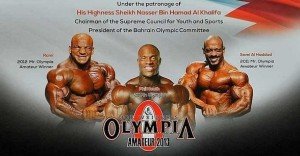 This weekend is going to be the next great IFBB weekend this year. In Manama, Bahrain, the 3rd Amateur Mr. Olympia will be hosted by the Bahrain Weightlifting and Bodybuilding Federation, headed by Sheikh Abdulla bin Rashid Al Khalifa. The event will be within the framework of celebration of the kingdom’s National Day and Accession Day.
The prestige of this event is still raising. This year’s Amateur Olympia will be held under the patronage of the Supreme Council for Youth and Sport Chairman, Bahrain Olympic Committee (BOC) President and Royal Charity Organization Chairman HH Sheikh Nasser bin Hamad Al Khalifa.
IFBB President Dr, Rafael Santonja comes on Thursday. Among the guests we can see famous bodybuilders: three-time Mr. Olympia Phil Heath and previous Amateur Olympias winners: Mamdouh “Big Ramy” Elssbiay and Sami Al Haddad of Bahrain.
A multi-purpose sports hall with 3,600 seats at the Khalifa Sports City in Isa Town will be the venue of this year’s Amateur Olympia.
According to Sheik Abdulla, over 110 competitors from 16 countries were nominated by the IFBB National Federations to participate in this event. They will compete in 7 bodyweight categories. The total prize money reaches USD 100 000 this year.

The other important part of the event will be EXPO, organized in cooperation with the United Nations Industrial Development Organization (UNIDO). Over 50 Bahraini exhibitors will be present there.