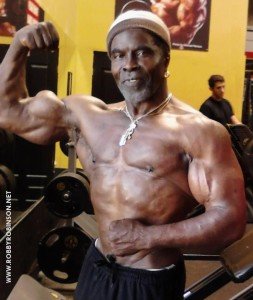 Kevin Grech of evolutionofbodybuilding.net interviews a true legend of the sport, The Black Prince – Robby Robinson.

Robby shares his views on bodybuilding in the modern era, training routines, health and his time with other legends in the sport.

How was like training and competing the likes of Arnold Schwarzenegger and the rest of the gang in the 70’s?
I never competed against Arnold. The only competition that came between the two of us was doing workout sessions. I had the chance to compete against Kenny Waller, Ed Corney and Denny Gable.

You competed from the 1970’s until won the Masters Olympia for the third time in 2000. How did you see bodybuilding change in the 30 odd years that you were active in the sport?
I saw bodybuilding change in the 80s. The bodybuilders of the 80’s became bigger and harder, and leaner. They were eating more food and, you know, handling more weights. I saw heavier anabolic use and growth hormone use during this time period. 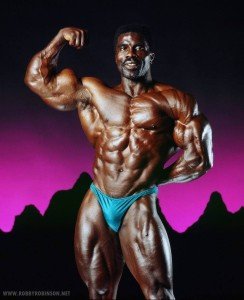 Obviously bodybuilders are much bigger now on the Olympia stage, is it positive or negative for the sport?
The weight of the average bodybuilder you see on the Olympic stage today is between 240 and 260Lbs, and some even heavier, up to 300Lbs. In my eyes, that’s not bodybuilding. Bigger is not better. Bigger is not healthier.

Some poses on stage have disappeared, for example the vacuum pose. What is your view on this?
You know, to see the competitors having trouble controlling their abdominals, it makes bodybuilding look bad. Many of the fans are talking about this online, and they are calling it a GH-gut. And a lot of them are thinking twice about spending their money to come to bodybuilding competitions.

Is the preparation for a contest destroying certain aspects of the body?
We have had a number of deaths over the years here, consistently. And yes, certain aspects of contest preparation are becoming deadly. We have both men and women dying of heart attacks, strokes and body systems failure. And that’s not good for the sport of bodybuilding.

I have noticed as well during an abdominal pose, the bodybuilders today don’t have the sharpness as for example Bob Paris or Shawn Ray. Could it be the modern bodybuilder is concentrating on size rather than definition and aesthetics?
I believe, the excessive body weight clouds the body’s ability to retain deep sharp muscle separation, as the likes of Shawn Ray and Bob Paris. More size does not mean more shapely muscles. 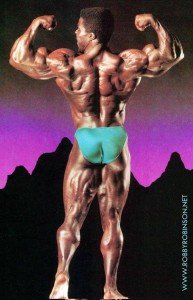 Should the IFBB put more pressure on how the bodybuilder should look on stage? As a more natural and healthier look.
I think, there should be some guidelines as they have in other sports. Bodybuilding is a multi-million dollar industry, and there are many fans that like the extremely massive physiques. So you cannot expect them to make too many changes, because then they will loose their fan base.

Since the bodybuilder should be the perfect image of health. Do you think the IFBB should make the bodybuilder to random tests for health (not anabolics) to make sure they are in good health?
I totally agree, there should be some kind of testing to make sure that their athletes are in good health. They have never drug-tested anyone since I have been there. Maybe, it’s time, because of the number of deaths.

You have been through it all, you had to do things to keep up with the other competitors, how do you feel training now then when you were on the Pro circuit. Do you feel better now?
I train like a beast every time I am in the gym. It’s just my ingrown mentality. To always go in the gym and put in 250 percent. I still want to develop this astonishing physique at 67 years old. I still love to train. I still have fun with it. And I will do it probably until I die. I love to workout. 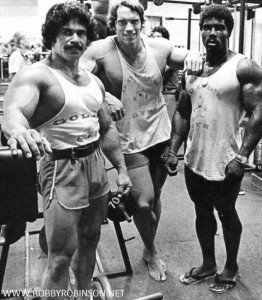 Now a few questions about yourself. Give us an example of your routine during the week, for example how many times you train and your eating habits.
I train five to six times a week: three days on, one day off. I use the “heavy – light” systems of training. I eat as if I am preparing for a competition, six meals a day. This helps me maintain my size, strength and overall muscularity.

Are you taking care of any future Pro bodybuilding stars?
No. I am just working with clients in my master class, reservations at www.robbyrobinson.net/master-class.php . I also work with a young amateur bodybuilding star by the name Blake Ginsburg. And I am also working with fitness bikini star Dusty Compton.

During your everyday life, do you meet any former or present stars and discuss bodybuilding and how it changed?
No, because I never communicated really that much with the guys in bodybuilding. My whole career was spent pretty much in Europe. I never developed any close relationship with anybody of the bodybuilders.

Your top ten favorite bodybuilders?
These are the bodybuilders that affected me when I saw what they were able to do with their physique:
Arnold Schwarzenegger, Shawn Ray,  Ed Corney,  Franco Columbu,  Mike Mentzer,  Dorian Yates,  Roy Callender,  Gunnar Røsbø, Rory Leidelmeyer,  Mohamed Makkawy and  Ahmet Enünlü. You can read about my views on many other famous bodybuilders and training methods in my book “The BLACK PRINCE; My Life in Bodybuilding: Muscle vs. Hustle” at www.robbyrobinson.net/books.php 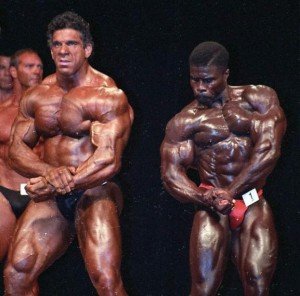 Training with Arnold. Was he a light or heavy lifter?
He rotated between both, he would use both the light and the heavy system. We all did back in those days.

What bodybuilders were cheated out of an Olympia victory?
Quite a few. One that comes to mind is Shawn Ray in the Mr. Olympia 1994.

Your relationship with the Weider brothers, how was it?
It was not very good. That was the way they chose to do it, but it did not prevent me from a very successful bodybuilding career.

Thanks and regards Robby!!