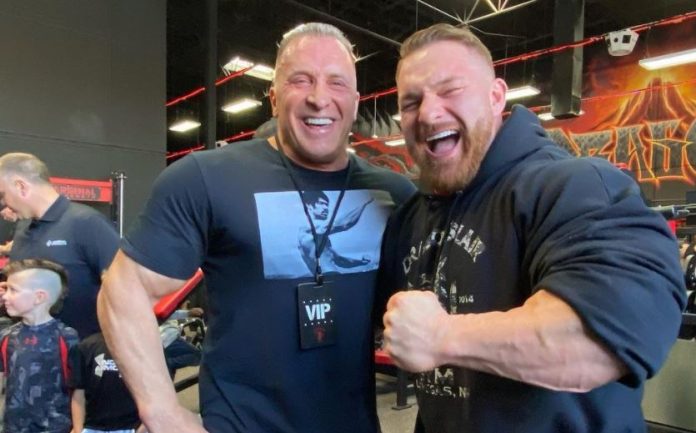 Flex Lewis’ famous Dragon’s Lair Gym has officially opened in Vegas and Milos Sarcev was there.

As reported last month by Evolutionofbodybuiding.net, Flex Lewis decided to not only move his entire family to Las Vegas, Nevada, but move his business as well.

Flex is known not only for winning seven consecutive 212 Olympia titles, but he is the owner of the famous Dragon’s Lair Gym.

After just over 8 years in Florida, Flex has decided to relocate his entire facility to Las Vegas, Nevada.

This move was welcomed by the bodybuilding and fitness world as Flex has literally created a new Mecca of bodybuilding in Las Vegas.

Jam packed with all the best machines and weights from the top brands, Flex has created an atmosphere that will keep the best athletes in the world happy.

The Grand Opening of Dragon’s Lair Gym was on 27 March, 2021. The majority of bodybuilding and fitness stars made the trip to Vegas to visit Flex Lewis, his family and take a tour of the gym.

Legends of the 80’s and 90’s plus the modern day champions were all there to enjoy the opening and meeting their ‘Brothers of Iron’.

How many times do you see a gathering of multiple Mr. Olympia winners in the same location.

Bodybuilding legend Milos Sarcev filmed over two hours of footage for every bodybuilding fan to enjoy.

Milos is one of the most respected people in the bodybuilding world and he was greeted with smiles everywhere he went at this Grand Opening.