In the past few weeks since the Mr. Olympia or we can even say since last year, the big debate to day is still if Kai Greene is better than Phil Heath. 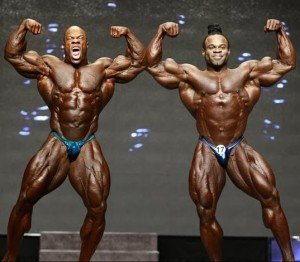 Now many might not agree with me, but just look at the two guys in a relaxed pose and see who looks better.

Forget about size and how much Kai is bigger, but Phil has those classic lines that make everything look better.

Then eveybody keeps saying Kai’s back is bigger.. well it is and taking nothing away from Kai as he is just fantastic, in reality Phil is still better.

Look at their arms, Phil is just complete and full, even the front poses I believe Phil still takes it.

Kai is a fighter and he will keep fighting, thats what makes the sport so great. Just look at Jay Cutler, even when he had to win, he still lost.

To defeat the current Mr. Olympia, the other contestants have to be not just perfect but much much better in everyway.

Many said Phil had a rough year, with external problems that could ruin his chances to win, but it just made him fight back even more and that is why he is the Mr. Olympia.

The sport is not just about who is bigger, but the whole package has to be there. It is easy to come in bigger, but those bodybuilders never could defeat the Mr. Olympia.

Just look at what Dexter Jackson and Frank Zane did in the past.

Like I said, Kai is great and I want to see him win the Mr. Olympia, but at the moment that will happen when Phil Heath says it will happen as the current Mr. O is still young and we still have not seen his best!