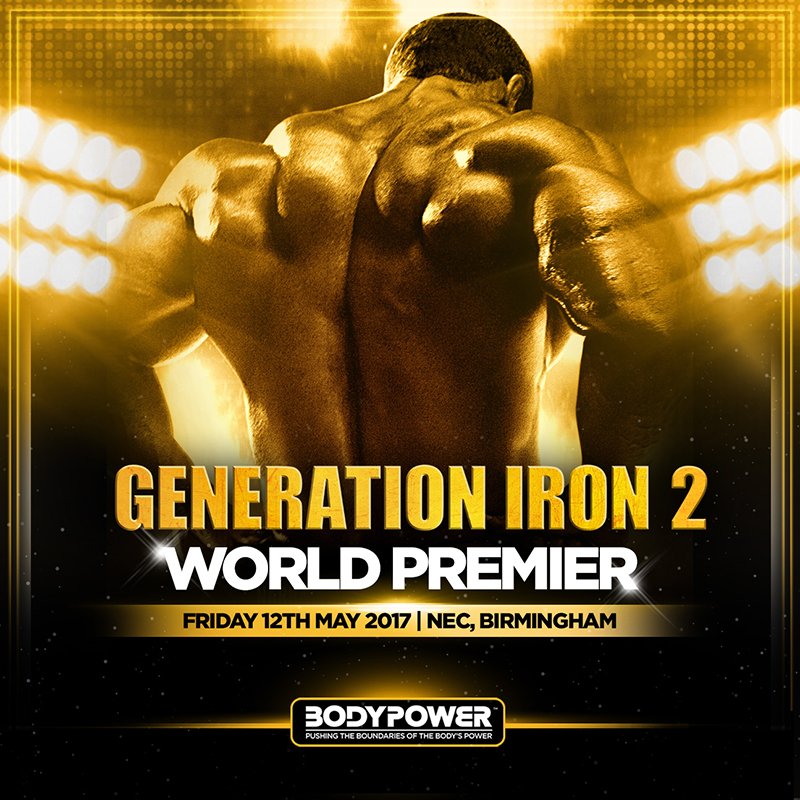 The movie sequel will introduce the next generation of bodybuilders

New York November 2nd 2016. The wait is over for the fans of “Generation Iron” and bodybuilding.  The original docudrama was produced by the Vladar Company and grossed over 1 million dollars in the US domestic box office and became one of the highest grossing docs of 2013. It’s a significant achievement for a documentary and a testament to the strong bodybuilding fan base.

The Vladar Company in association with Generation Iron Fitness Network® is pleased to announce that they forged a partnership with BodyPower to co-produce and release Generation Iron 2.

Generation Iron topped domestic home video charts (including iTunes and Amazon), played across premiere platforms such as Netflix and ESPN and was released globally, becoming the first film to commercially cover the world of bodybuilding since Pumping Iron (1977.)

The new film focuses on the next generation of bodybuilders and fitness personalities as they push their physiques to the “next” level, while generating mass appeal around the world.  Official cast and details are soon to be announced.

BodyPower will serve as a co-production and exhibition partner to release the film globally in over 15 countries.  The production will take place through fall and winter of 2016 and is scheduled to premiere first in the UK in May 2017.

The original production team from Generation Iron is creating the picture, Vlad Yudin will direct and Edwin Mejia is producing.  Nick Orton and Ollie Upton of BodyPower will serve as Executive Producers.

“The bodybuilding and fitness industry has continued to evolve dramatically in the last few years.  New personalities and stars emerge in the sport.  We waited to make the sequel to Generation Iron, until we found the right moment and the right characters Especially, when you take into account “Generation Iron” played a significant role in people’s lives and we in no way wanted to repeat the same story twice and call it part 2… Now it’s time!” said Vlad Yudin.

“I am enthusiastic to be collaborating with Vlad Yudin and his team. I look forward to bring fans, unique behind the scenes insight into the world of modern bodybuilding. Including the role social media is playing in driving a wider fan base. I personally know many body builders and fitness stars. I want the public to see them as I do. Get to know them beyond their public image of YouTube Video’s, stage performances and glossy magazine covers.”

“What excited me about Generation Iron 2 is that we’re looking at the transition of bodybuilding into popular culture and the mainstream. That change has been driven by the personalities that we will feature in our cast. The sport no longer lives in dark corners of society and I’m immensely proud to have been part of growth and development of the fitness culture through BodyPower” stated CEO of BodyPower Nick Orton.

The world premiere of “Generation Iron 2” will be at BodyPower Expo in the UK in May of 2017 a very exciting development that I am delighted to be part of.

Tickets are strictly limited for the red carpet event as visitors will be rubbing shoulders with he stars from the film.

For more information about production and release please visit GenerationIron.com and BodyPower.com

About The Vladar Company:

The Vladar Company is a media and entertainment company which focuses on developing, financing, and packaging a library of intellectual properties with its producing partners at leading Hollywood and international production studios. The company is becoming a leading producer of many genres and multiple mediums in US and international markets, while also expanding into acquiring and distributing high quality content. Recent releases include The Hurt Business (with Ronda Rousey, Jon Jones and Georges St. Pierre) and Jeremy Scott: The People’s Designer (with Katy Perry, Miley Cyrus and Rita Ora)

BodyPower is a global fitness media business which has developed a portfolio of successful exhibitions in the UK and India attracting over 130,000 visitors, international brands and the best fitness stars annually. With over 3,000 active ambassadors covering four continents and an expanding portfolio that includes live events, clothing, merchandise and a Dedicated by BodyPower Eau de Toilette, BodyPower is one of the world’s leading fitness brands.

Generation Iron Fitness Network is the first digital network broadcasting original video content for all things bodybuilding and MMA. The network covers premiere contest coverage, news and cutting edge original shows – the network’s vision is to deliver all aspects of bodybuilding and MMA instantly to fans across the globe. No limitations. No missed opportunities. Just pure groundbreaking Bodybuilding, Fitness and MMA.