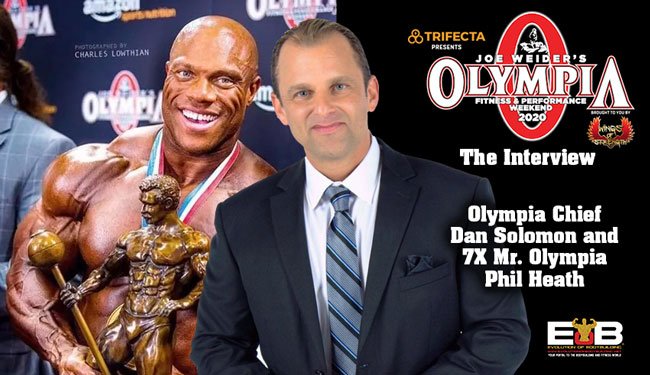 Dan Solomon and Phil Heath had a very interesting discussion on Instagram Live on Monday evening.

Dan Solomon, who is a journalist by profession, made sure he had the best questions ready for the seasoned pro, Phil Heath.

Since winning his first Mr. Olympia title in 2011, Phil Heath has matured and has learned how to handle the pressure of this complex sport called bodybuilding.

Dan started the interview asking Phil about the night he lost in 2018 to Shawn Rhoden and what he would have done different.

Even after winning seven Mr. Olympia titles, losing in 2018 was a difficult moment for Phil, but he also used that as a learning curve and it helped him in the long run.

Phil said that he would not have done anything different, it was just a mission that was not finished in relation to winning his eighth Mr. Olympia title.

In 2019, he used the time to setup numerous businesses, hiring Dany Garcia as his new manager and work on his new documentary with Seven Bucks Productions.

When asked about how he will approach the 2020 Mr. Olympia, Phil said the world will see a “Healed Phil Heath”.

Expanding on this, Phil explained that everybody knows what the outcome will be when they see a Phil Heath in his best shape.

Turning the subject over to the media, Phil Heath was thankful to all the media that continue to promote the sport in a professional manner and with respect.

Phil called out bloggers such as Nick Strength, Luimarco and other media that continue to promote negativity about him.

Dan Solomon then turned to the subject of equaling the record of Ronnie Coleman and Lee Haney.

Phil Heath explained how he started to get interested in bodybuilding by purchasing every DVD or Video he could get his hands on. The choice to get into bodybuilding was after he basically closed the door on his basketball career.

Phil Heath did mention that he will never equal Ronnie and Haney’s record as they won eight consecutive Mr. Olympia titles, but winning eight Mr. Olympia titles would be a dream come true for him regardless how long it took.

Phil believes that competitors in the sport of bodybuilding have great respect for each other.

At the same time, Phil believes that his fellow competitors see him as a threat and they will use him as motivation and to stay on target. Phil said “Champions do Champion shit and don’t need motivation from anybody.”

Prejudging will be on 18, December 2020, which is also Phil’s birthday. It would be the greatest birthday present if he does win the 2020 Mr. Olympia as he turns 41.

Phil also sent a message to his fans that he has never retired and he is back to take back what is his. In regards to his fellow competitors, Phil had nothing to say…