Probably no one in bodybuilding is as associated with a bodypart as much as Tom “Legs” Platz. In his early contests, whatever his overall placing, he frequently won the best legs subdivision.

In the summer of 1978, Platz moved to California and got a job handing out towels on the beach, so he could train for the Mr. America in September. He won best legs and placed second in the short class, but he was also selected to compete in the World Amateur Championships in Acapulco, where he won the middleweight class and gained his pro card.

Platz’s IFBB pro debut was October 7, 1979, in Columbus, Ohio, in the under-200-pound class at the then two-tiered Mr. Olympia; he placed eighth. Platz’s best IFBB placings were second at the 1980 Pro Universe in Columbus, Ohio, and third place at the 1981 Mr. Olympia. Shortly after that, he injured his right biceps, neglected to have it treated immediately and, after four more pro events, retired from competition, following his sixth-place finish at the Detroit Pro Invitational in 1987. His total IFBB run was a dozen contests.

Tom Platz’s leg development was peerless in his day and has not yet been surpassed. Perhaps his greatest achievement is that he remains the first gentleman of bodybuilding.
Tom Platz retired from professional bodybuilding competition in 1987 and did a ‘Comeback’ in 1995 when he was awarded Honorary Mr. America. He still promotes the sport wholeheartedly. Tom says, “I just want to give back to the sport I love which has been really great to me.”

He played the part of “Body Builder” in the 1990 film Book of Love. His character portrayed the Charles Atlas-like character from those “tired of bullies kicking sand in your face and stealing your girlfriend” type of advertisements that were in a lot of comic books during the 50’s and 60’s.
Tom Platz was and is one of the most sought after guest speakers in the world of bodybuilding, nutrition and general fitness. He was a Professor and the Director of Bodybuilding Sciences at ISSA for 14 years. Tom has a Masters in Fitness Science, Bachelors in Science Physiology and Nutrition from Wayne State University and Michigan State University, and a Masters in Business Administration from the University of California. 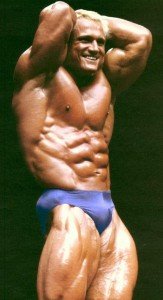