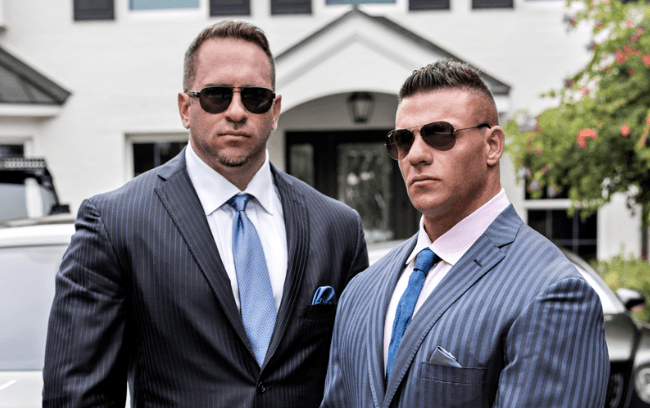 A major crackdown on some of the biggest names in the supplement industry has just been announced by the United States Department of Justice.

This will send shock waves through the supplement industry in 2019. Especially at the beginning of the 2019 contest season.

Those involved are some of the biggest names in the industry

The official press release from the United States Department of Justice:

Six people and two Florida corporations were charged in an indictment for their roles in a scheme to distribute illegal dietary supplements, the Department of Justice announced today.

The indictment alleges that the defendants sold hundreds of thousands of illegal products, including anabolic steroids, nationwide and internationally, fraudulently representing that those products and pills were high-quality, legal dietary supplements.  According to the indictment, the defendants created an illicit manufacturing company and routed sales of illegal products through trusted distributors, knowing that the products were unsafe or could not legally be sold to consumers.

“Fraud by supplement manufacturers and distributors is extremely dangerous for consumers, who rightly assume that a dietary supplement product sold in stores or online will not contain unapproved drugs,” said Assistant Attorney General Jody Hunt for the Department of Justice’s Civil Division. “These products are not safe and that is why we will continue to aggressively pursue and prosecute those who import, manufacture, and distribute dangerous and illegal ingredients for fraudulent purposes.”

“Consumers who use dietary supplements expect those products to be safe. When they contain drugs that are not FDA-approved, the health of the public is put at risk,” said Catherine A. Hermsen, Acting Director, FDA Office of Criminal Investigations. “We will continue to pursue and bring to justice those who place consumers’ health in jeopardy.”

The indictment further charges Braun, Singerman, and six other defendants with one count of a conspiracy to distribute anabolic steroids, which are Schedule III controlled substances under federal law and which may cause kidney failure, liver damage, and other permanent health problems when misused.  The indictment alleges that one person suffered serious bodily injury from the use of one of the steroids involved in the conspiracy.  The maximum punishment for the conspiracy to distribute controlled substances is 15 years’ imprisonment and a fine of $500,000 or twice the gross gain or loss from the offense.

The indictment additionally charges several defendants in three separate counts of distribution of anabolic steroids and charges Ventrella with one count of possession of an anabolic steroid with the intent to distribute.  The maximum punishment for each count of distribution of a controlled substance and for the count of possession of a controlled substance with intent to distribute is 10 years in prison and a fine of $500,000.  Finally, Braun and Singerman are each charged with three counts of money laundering.  The maximum punishment for each money laundering charge is 10 years in prison and a fine of $250,000 or twice the amount of the property involved in the money laundering transaction.

“Illegal dietary supplements pose a public health risk,” stated U.S. Attorney Fajardo Orshan.  “The U.S. Attorney’s Office for the Southern District of Florida and our partners at the Food and Drug Administration strive to ensure that consumers are fully apprised of the ingredients contained in the substances they are ingesting.  Those who attempt to circumvent the law and create a public safety hazard will be held accountable.”

This case is being prosecuted by Trial Attorneys Alistair Reader and David Frank of the Department of Justice’s Consumer Protection Branch, with assistance from Daren Grove, Assistant United States Attorney for the Southern District of Florida.  The case was investigated by FDA’s Office of Criminal Investigations with assistance from Sarah Hawkins of the Office of Chief Counsel.An indictment merely alleges that crimes have been committed. All defendants are presumed innocent until proven guilty beyond a reasonable doubt. 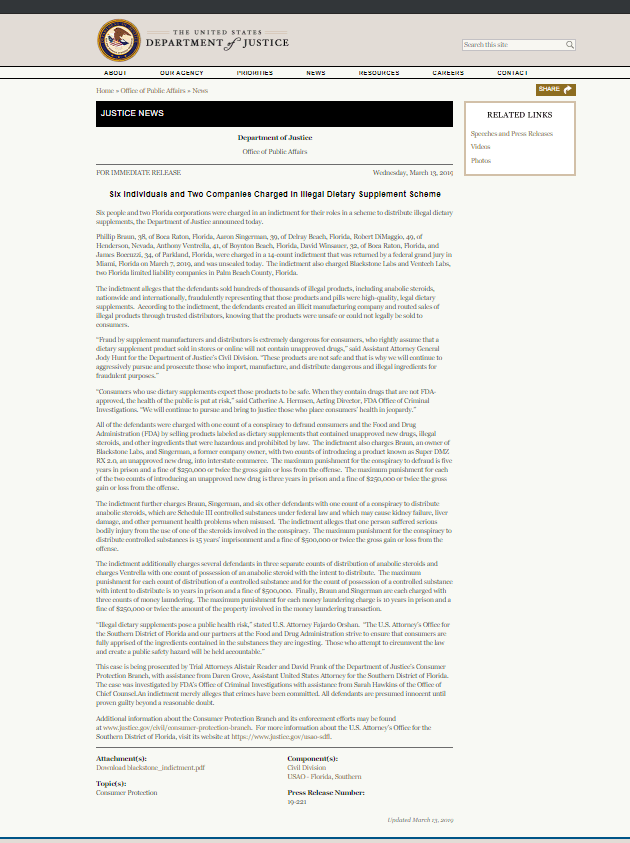