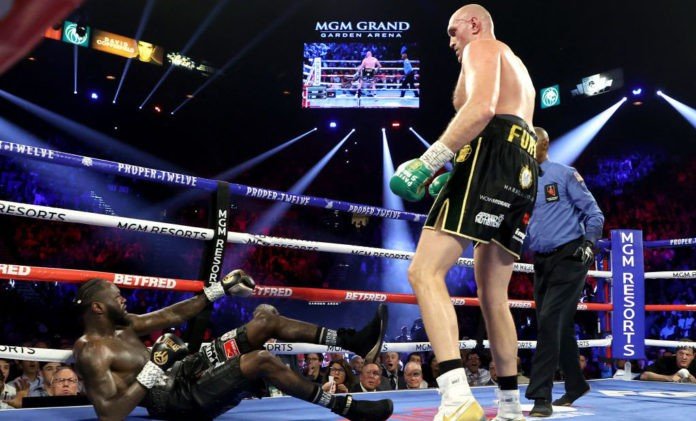 This is not bodybuilding, but boxing is an extreme sport that we love to follow.

When you see history being made, an event like this must be reported.

Tyson Fury came back from defeat to win the WBC heavyweight championship after knocking out Deontay Wilder in the seventh round.

Tyson Fury completed the greatest comeback in modern sports history on Saturday night when he knocked out Deontay Wilder in the seventh round to win the WBC’s version of the world heavyweight championship.

Tyson Fury is the first boxer in history to win every major world title in the heavyweight division at some point in his career.


The Gypsy King made good on his promise to go for a knockout in one of the most anticipated rematch against Wilder who is regarded as boxing’s most dangerous puncher.

Tyson came forward from the opening bell, dropped the champion for the first time in a decade with a right hand to the temple in the third round, then again with a clubbing left to the body in the fifth.

By the sixth, Wilder was bleeding from his left ear, his legs were completely gone and he appeared unable to defend himself as Fury picked him apart. When referee Kenny Bayless waved it off at the 1:56 mark of the seventh after Wilder’s corner threw in the towel, it set off scenes of pandemonium among the sold-out crowd of 15,816 at the MGM Grand Garden Arena.

Wilder opens by firing a couple jabs. Fury staking. Now they settle into the middle of he ring. Wilder delivers with an overhand right. Lands solid. Now Fury unloads with a right. Just off the mark. Fury now has Wilder backpedaling. Fury making good on his promise to press early. Fury stalking. Pro-Fury crowd makes itself heard. Fury lands a solid jab. Then a right. And a snapping jab. Fury 10, Wilder 9.

Fury pressing forward again. Wilder has the right hand cocked. Surely looking to delivering the power punch. Wilder does just that. Solid blow. But Fury stays aggressive. Fury’s unorthodox styles seems to have Wilder off balance, not unlike the early rounds of their first bout. Wilder looks a tad cautious. Both connecting, but nothing noteworthy. Wilder delivers a right, but not devastating. Fury still moving forward. Wilder delivers with a right. Wild fray as they finish. Fury 20, Wilder 18.

Same dance: Fury stalking, Wilder content backpedaling. Fury lands a big right hand after a jab. And another right. Fury looks very aggressive. Fury looking for an early KO and is far more active than Wilder now. Another right from Fury. Fury floors Wilder! Down with 30 seconds left in the round! Wilder back on his feet. Wilder definitely hurt. Fury 30, Tyson 26.

Referee warning both fighters to keep it clean. Wilder hits the canvas! But it’s a slip. Still, he looks tired and in trouble. And Fury hits Wilder with another punishing shot to the body. Fury putting on a clinic here. Wilder looking understandably cautious. Fury 40, Wilder 35.

Fury delivers again! Big right hand and more to follow. Wilder unsteady. Fury chopping away with his right hand. Wilder looks to be loading up. He’ll need the supersonic punch to survive this. Wilder down again! Body shot takes him down! Survives the 10 count but looks unstable. Fury half wrestling Wilder as he takes control. Wilder barely able to stand on his feet. Will be remarkable if Wilder survives the round. Another big right from Fury! Referee deducting a point from Fury for a foul. Has sbeen wrapping his arm around Wilder’s neck in the clinch. Fury 49, Wilder 43.

Fury moving in for the kill. Wilder looks spent as Fury continues to unload punches. Fury just dominating as he lands overhand rights and forces Wilder into the corner. Wilder finally fighting back, but scarcely slowing Fury. Blood streaming from Wilder’s left ear is everywhere. Fury is covered. Fury 59, Wilder 52.

Fury opens with a sweeping left that lands. Wilder still looking unsteady. Two more jabs from Fury. This is now a rout. Wilder throwing punches, but he looks slow and they miss. Fury forces Wilder. Referee Kenny Bayless calls the fight at the 1:39 mark! It’s a TKO victory for Fury! Wilder’s corner literally threw in the towel before the referee stepped in and ended the fight.

“My side threw in the towel, and you know I’m ready to go out on my shield,” Wilder said in a post-fight interview. “You know what I’m saying, I had a lot of things going on coming into this fight. But it is what it is. … I make no excuses tonight. I just wish my corner would have let me go out on my shield. I’m a warrior. It’s what I do.”