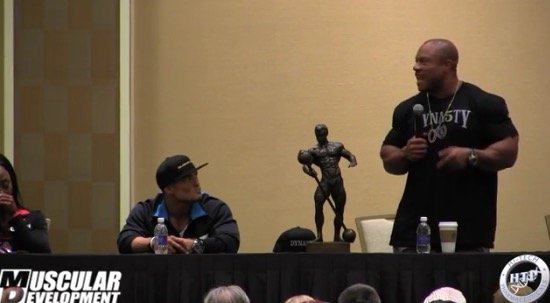 In part 1, Phil thanks all the fans for coming out & supporting bodybuilding and Flex talks about depth of the 212 division & what Jose Raymond told him on stage.

In part 2, Flex talks about finding out he was going to be a father and what he plans to do with his child next year, then Latorya talks about the suprise of winning the figure division.


In part 3, Nicole Wilkins talks about the strength of the top 6 and her motivation level going forward. Dexter Jackson talks about how close it was between Phil, Shawn & himself, what he thought of Big Ramy, what his girlfriend thought of him being away in California for months and more.


Part 4 – Shawn Rhoden talks about running into Dexter at the Gold’s Gym, then Juliana talks about the transition from Figure to WPD and which was harder: earning the title for the first time or defending it.


Part 5 – Jeremy Buendia talks about being the under dog even though he was the defending champion & how that motivated him to win. Ashley Kaltwasser discusses the camaraderie between the competitors, why she slowed down on competitions this year and her surprising possible plans for next year. Oksana Grishina finishes this segment.


Part 6 – How can Dexter, Shawn and Ramy beat Phil Heath next year? Phil is asked to give them advice. What will Phil do when Ramy shows up shredded? Listen in to find out.


Part 7 – Shawn Rhoden talks about facing Big Ramy in the future, then opens the mic to fan questions. Melvin Anthony follows by doing impressions of his peers and dicusses competing.


Part 8 – Phil Heath shares what happened between pre-judging and finals to make him look so much fuller, then Flex Lewis responds to questions from the audience.


Part 9 – Nicole Wilkins speaks about her show in Finland. Phil Heath then voices his thoughts on how fans get tired of you winning by the 3rd title. He tells exactly how Kai choosing to not compete affected him and what Kai needs to do from here.