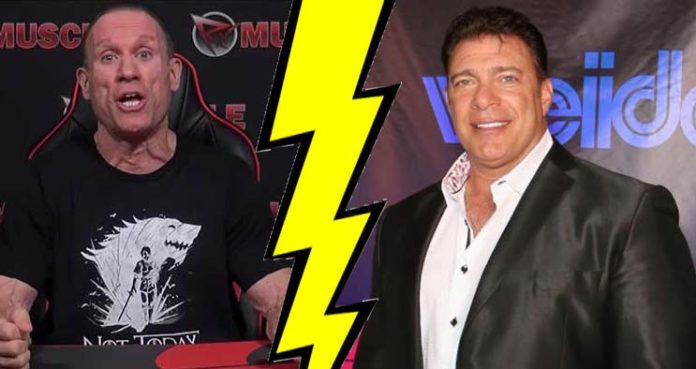 WATCH: Dave Palumbo vs Bob Cicherillo – Who do you believe?

This past week has been a interesting one in regards to battles behind the scenes in the bodybuilding world.

Dave Palumbo last week published a video accusing Bob Cicherillo of sending emails to the staff of the popular Joe Rogan Experience Podcast suggesting not to invite Dave Palumbo to his show. (Read emails at end of article)

Other accusations from Dave were that Bob talked behind his back when it came to women, including Dave’s wife before were got married.

The story regarding the email to Joe Rogan goes a few months back during the build up to the 2019 Olympia.

Dave decided this was not the right time to expose Bob Cicherillo as according to Dave, the Olympia was already having problems.

The moment Dave published his video with his rant and accusations towards Bob Cicherillo, social media was on fire debating if Bob Cicherillo would actually do something like this.

The day after, the video made its rounds and had a good number of views.

Then, the video was suddenly removed from Youtube by Dave Palumbo, but the damage was already done to Bob.

Video No. 2 – Dave admits he believes that Bob did not write the emails

Dave then went on to publish another video revealing to his fans that Bob contacted him and insisted that he did not write the emails that he is being accused of writing. Dave went on to admit that he believes Bob and that is why he removed the first video, but insists regarding the other allegations, he stands by what he said.

Video No. 3 – Dave invites Bob on his show and they continue to trade allegations

A third video was then published again by Dave Palumbo interviewing Bob Cicherillo himself.

The two traded accusations and Dave seemed to try every trick in the book to make Bob look bad.

Bob, did not hesitate to give answers and when he pressed Palumbo, the latter would immediately change the subject and try to accuse Bob of doing something else wrong.

With Dave’s YouTube presence, the damage was done to Bob and it would be an uphill battle for Bob to clear his name.

Video No. 4 – Bob Cicherillo reveals evidence to clear his name

The day after his interview with Dave Palumbo, Bob was invited on Muscular Development’s show with Ron Harris.

Bob went on to reveal the evidence that would clear his name. He immediately made it obvious that Dave reacted too quick and never expected a person with his journalistic experience would fall for such a scam.

Bob believes that whoever wrote these fake emails wanted to hurt Dave Palumbo more than himself.

In reality, Bob, like him or hate him, was thrown into the fire by Dave for no reason.

Dave is now responsible for tarnishing Bob’s image with the bodybuilding world.

As usual, when Dave is cornered, he says “lets forget about the past and start fresh.”

But as Bob told Dave, when the proof finally surfaces, will Dave publish a video with the same passion as he did the first one?

When Bob finally reveals who is sending these fake emails, we are very curious to see how Dave will react.

It looks as this battle will continue in the months ahead with both trading accusations.

Below are the letters that Dave Palumbo accused Bob Cicherillo of writing: 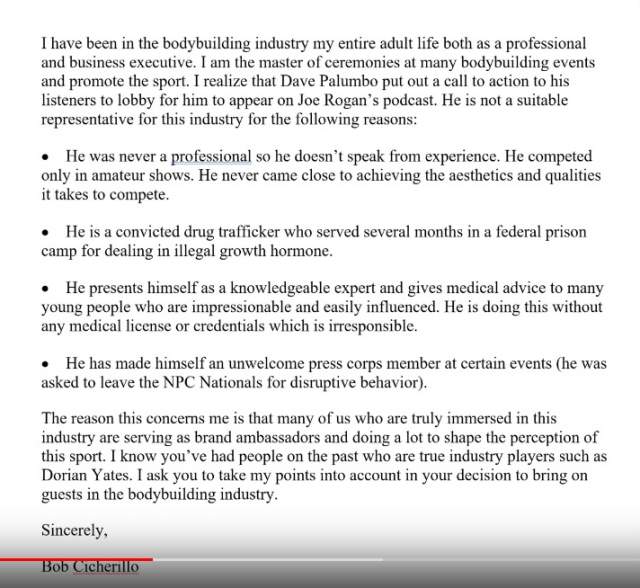 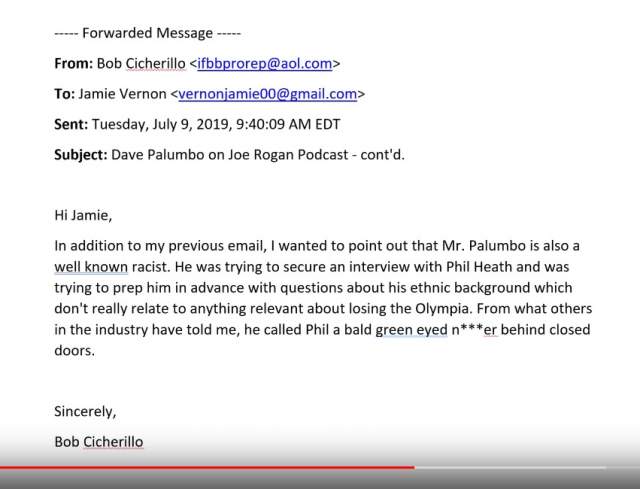