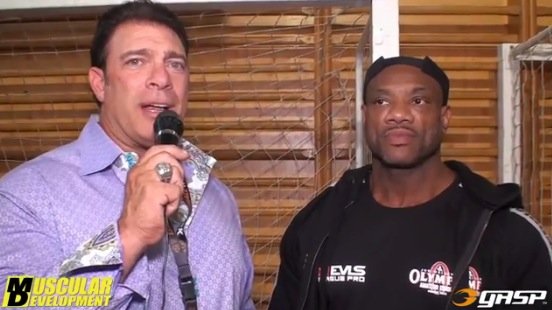 Dexter Jackson, Dennis Wolf and Roelly Winklaar took the time to talk to Muscular Development’s Bob Cicherillo after the ‘Meet and Greet’ with fans at the 2015 EVLS Prague Pro show.

Muscular Development’s Bob Cicherillo interviews Dexter Jackson at the Meet and Greet hosted by the EVLS Prague Pro promoters. Dexter is fresh off a victory in Spain, but must face last year’s winner, Dennis Wolf.

IFBB Pro bodybuilder Dennis Wolf talks with MD’s Bob Cicherillo about his Olympia experience, being compared with shorter bodybuilders, how he gets better with each show after the Olympia and more.

Muscular Development’s Bob Cicherillo talks to IFBB Pro Bodybuilder Roelly Winklaar at the 2015 EVLS Prague Pro Meet and Greet. Roelly is one of the few athletes doing every leg of the European Tour and tells Bob his reasons behind doing so many shows back-to-back