Where are they now? with Tom Prince.

The new series by Shawn Ray called Where are they now? has become a instant hit on digitalmuscle.com.

In this episode, Shawn Ray catches up with former bodybuilding star Tom Prince.

Tom Prince’s bodybuilding career from an amateur to professional spanned from 1995-2002.

Tom won the NPC Nationals overall title in 1997 to then move on to compete with the IFBB Pro League.

The era that Tom competed in had some of the best bodybuilders in the history of the sport.

Tom was one of the lucky bodybuilders that made very good money with supplement companies even when he was an amateur.

Unfortunately, Tom had to cut his career short due to illness.

Get to know the full story in Shawn Ray’s latest installment of ‘Where are they now?’ 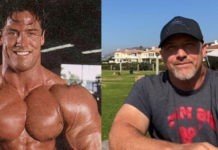 Where are they now?

Where are they now? with Dennis Newman