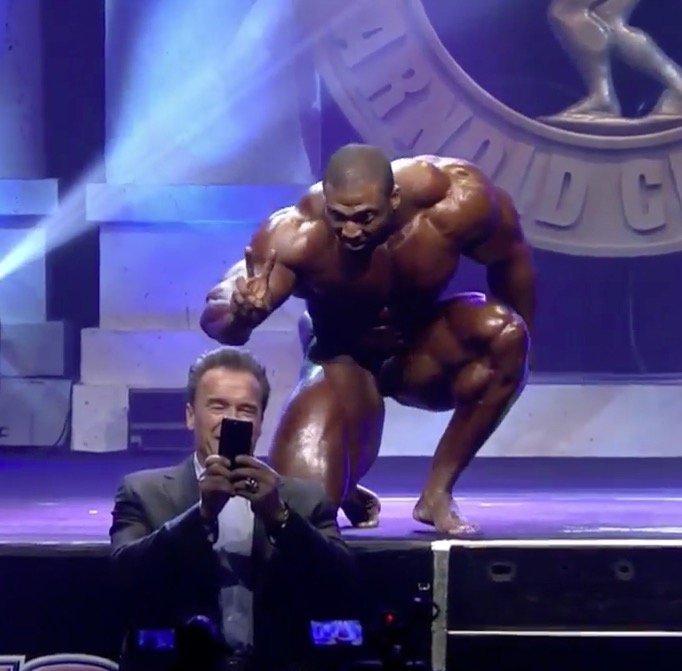 The 2017 Arnold Sports Festival / Arnold Classic  has come and gone.

The fans witnessed some great or you can even say historic moments on stage.

Obviously the weekend was a great success. Many believe the Arnold Sports Weekend is in fact bigger than the Olympia weekend.

Arnold Schwarzenegger spends a lot of time at the festival. He does not act as a superstar but rather somebody that loves the fitness industry and is not afraid to get involved with the fans and athletes.

It was great to see the Wheelchair Pro athletes get a great response from the crowd. The prize money could have been bumped up for these great athletes.

The Bikini International contest’s outcome was a bit of a surprise. Many though the reigning Ms Olympia Courtney King placed second to Angelica Teixeira. This division is one of the hardest to judge and always ends up surprising us all with the results. The women are all in fantastic shape and it must be a judge’s nightmare to judge such an event.

Oksana Grishina of North Hollywood, Calif., won the prestigious Fitness International for the fourth straight year, then immediately told Arnold Schwarzenegger that the competition was her last on the Arnold Classic stage. Grishina, though, did not announce her retirement. Oksana will surely be missed on the Arnold Classic circuit.

In the Men’s Bodybuilding 212 class, it was a close battle between David Henry and Ahmad Ashkanani. David Henry was in fantastic condition, but when it came to the famous back pose that usually decides the outcome of a competition, Ahmad was just incredible. The man from Kuwait has went from a Australia Amateur winner to placing second at the 212 Olympia and winning the prestigious Arnold Classic. the reigning 212 Mr. Olympia must be keeping an eye on this rising star.

Another event that took place in the 212 category that many have noticed and if you missed it you can surely find the footage on Youtube was the posing routine of Canadian IFBB Pro Zane Watson.

Zane Watson showed the world what posing is all about. We have not seen a posing routine like that in a long time. It was reminiscent of Lee Labrada when he was at his best. The routine was so good that Arnold got up to record a selfie while he was posing.

Moving over to the popular Men’s Bodybuilding open class we saw Cedric McMillan finally lift the trophy of the Arnold Classic. Always getting close, he never could really get it timed well in the past. In 2016, the title could of easily went to Cedric, but Kai was the eventual winner.

Cedric’s main competition was the young Dallas McCarver. Dallas is a bodybuilder that packs a lot of muscle. Dallas and Cedric stood out from the rest of the field. the condition of some of the athletes could of been better, but an hour can change the condition of a bodybuilder in this sport and it is something that just happens, it happens to the best in the world.

Dallas was thick and packed a lot of muscle compared to Cedric, but Cedric had a more pleasing physique that can go up against the best in the world, if he arrives in his best condition.

Dallas needs to develop a thicker back and possibly a fuller chest. When he takes care of certain small details, the USA will have their version of Big Ramy. A true Olympia contender in the future.

The winner’s interview was one of the best ever heard on a bodybuilding stage. Cedric made sure all the competitors were with him and as well he turned the tables around on Arnold and actually interviewed him.

The best part was when he Cedric made Arnold do his famous pose.

Other incidents occurred that the bodybuilding world is still talking about today.

While performing his posing routine, Arnold again went to the stage to record a selfie. We found out later that Cedric hates these things and took advantage of the situation by giving the peace sign and as well messing up Arnold hair. It was a great moment.

As well when Arnold managed to interview Cedric when he won the Arnold Classic title.  Arnold again got his mobile to take a selfie. Not only did Cedric pose for him, but he ‘humped’ Arnold as well. This incident was laughed at and criticized at the same time. But at the end, Cedric explained himself and according to Cedric, Arnold thought it was funny as well.

With all that happened with Cedric this weekend and what he has managed to do. Somebody has to do something extraordinary to beat that. Cedric showed that he is capable of being a great ambassador for the sport of bodybuilding, and we hope he continues to do the same.

the bodybuilding world is buzzing with talk about the possibility of Cedric challenging for the Olympia title. This is being blown out of proportion. First of all from now to September it is a long time and as well we must not forget, you have to defeat the reigning Mr. Olympia convincingly.

Cedric has a new perfect physique with a lot of size and flowing lines, but again, when it comes to the back pose, Phil Heath is the man to beat still. We must not forget the likes of Big Ramy, Shawn Rhoden, Dexter and a number of other fantastic bodybuilders. If Cedric does dial it in, he can be dangerous. It is going to be an exciting 2017.

Finally, another big announcement was made when IFBB Legend Flex Wheeler announced he is going to step on stage again, but not in the bodybuilding open class. He will me competing in the Men’s Classic Physique class. Is this a good idea? Well, it is his body and he knows how he feels physically and mentally.

Read more here: Flex Wheeler will be competing at the 2017 Olympia.

The 2017 Arnold Sport Festival weekend was another great event and we at evolutionofbodybuilding.net are truly honored to cover such a great event again. We must also thank Matt Lorz for his contest reports and the other sites such as Muscular Development, NPC News Online, RxMuscle, Team-Andro.com and Eastlabs.sk for all the great footage that they continue to produce.