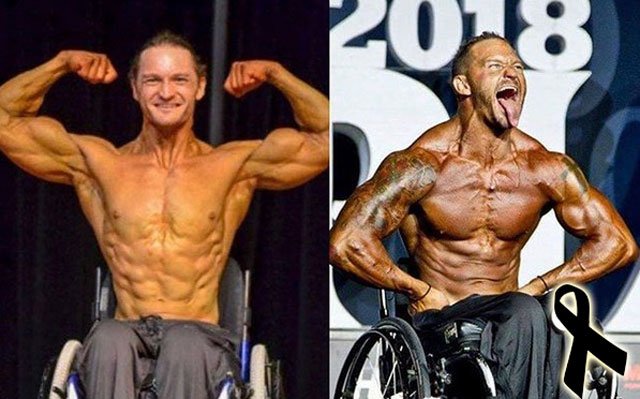 This Sunday morning (24 May, 2020) we heard about the passing of Wheelchair Pro bodybuilder Joshua Foster.

Joshua Foster past away at the age of 36, just a month away from his 37th birthday.

Joshua D Foster passed away from natural causes while at home on the afternoon of Thursday, May 21. More Information will be posted soon. “This is very hard to post. We lost an amazing person and an awesome Pro Wheelchair Bodybuilder. I am shocked. I am at a loss for words. I will keep everybody updated.” – Nick Scott

Pro Wheelchair bodybuilders are a cut above the rest.

These athletes go far beyond what the perfectly healthy athlete does to prepare for a show.

Joshua incredibly made it to the bodybuilding stage just three years after his horrible car accident that caused his life changing injuries.

Evolutionofbodybuilding.net has always had great respect for these athletes and to hear about one athlete passing away is very saddening.

I’m watching DOGS on Netflix . Amazing life’s . They make us happy . They give us a reason to live. Just having Jo by me . Keeps me wanting to wake up. Knowing I have this among beast that needs and wants me around . When I hear her tags shake . When I see her. She is so excited . When I’ve been on bedrest and she was there every time I needed her . When the nerve pain is to much she comes and finds me . The love of a dog is magical . It’s beyond love it’s just your damn buddy.  – Joshua Foster

Competition photos of Joshua can been seen at NPC News Online. Click HERE.

Joshua was going to compete at the 2019 Arnold Classic but got injured and did not compete.

Joshua Foster was born in Birmingham, Alabama and grew up spending his days like most boys his own age. He lived in a small town called Fultondale, which is close to Birmingham. The only real adversity he faced was having asthma, but that didn’t stand in his way of playing sports like football and baseball all the way through high school.

After high school, Joshua spent time working various jobs in hopes of finding something that he would enjoy doing long term. He spent a large amount of time working for a small company installing window treatments throughout the southern part of the United States. When Joshua was not working, he enjoyed spending his time working out in the gym. He had gained a deep appreciation for working out by watching his older brother and his friends workout in their basement at home. When he wasn’t working out, he enjoyed being active outdoors. He spent time outside staying busy playing golf and spending time at the lake. He was always trying to find ways to be happy. All of that changed completely on March 30, 2013.

March 30, 2013 started out like any normal day with Joshua hanging out and watching a movie with his friends. He was enjoying spending time with his friends. The last thing he can actually remember from the day is getting into his car and buckling his seat belt. The next memory he has is waking up in a hospital in Birmingham, Alabama. He woke up disoriented and scared. He had no feeling in his body and tried desperately to move. He called for help, which was answered by a nurse named Hannah. She worked to calm down Joshua. She explained that he suffered a spinal cord injury and his spinal cord was completely severed. In addition to the devastating spinal injury, Joshua Foster also suffered from broken ribs and scapula. These injuries caused him a lot of pain.

Shortly after speaking to Hannah, Joshua was able to see his family. He was incredibly scared about his situation. The best way he could think to handle the situation was to default to humor while talking to his family. He made jokes with his mother about being able to park close to stores for the sales. He also joked that he and his brother could get good seats to any games they wanted to go to. After being able to spend some time with his family that Monday morning, Joshua had surgery. The purpose of this surgery was to kick start his recovery.

He spent four days in the Intensive Care Unit before he was able to be moved to Patient Therapy. He had staples up his back from the surgery and he spent most of his time battling the pain from surgery and his broken bones. He began his physical therapy with light weightlifting with dumbbells and a dip machine. Joshua approached each of his sessions just as he always did with all his workouts. As a result, he made great strides towards improvement. After a month, he was able to transition from Patient Therapy and go home. Even though he was able to go home, he still had a lot of rehabilitation ahead of him.

He was driven to spend his time working on wheelchair bodybuilding to become stronger and more independent in performing various things around the house. Joshua spent months improving his health and healing his body. He worked hard with the goal of participating in wheelchair bodybuilding on a professional level. He taught himself how to perform bodybuilding in this new manner. Joshua constantly reminded himself that he always had things to hope for and encouraged himself to never stop reaching his goals.

Joshua’s dedication has produced amazing results. Eventually, Furst Place Nutrition began sponsoring him. He was afforded that unique position because of his great work ethic. He also maintained a great attitude towards what he was doing and his future in his wheelchair. Since going professional with wheelchair bodybuilding, he has added some great accomplishments to his record. In 2015, he received both the Pinebelt Classic overall and the Vulcan Classic overall. In 2016, he was the Wheelchair Nationals middleweight / overall winner and the International Federation of BodyBuilding and Fitness (IFBB) pro card recipient.

Looking back on his experiences, both good and bad, Joshua has some tips and advice for everyone. He appreciates all those who respect what he has managed to accomplish over the past few years. He encourages everyone to be will to try and learn new things. Joshua would like to encourage everyone to remember they can accomplish anything they set their mind to, as long as they dedicate themselves and keep trying.

Evolutionofbodybuilding.net send our deepest condolences to Joshua’s family and friends during this difficult time.

RIP: Joshua D Foster @jthefreak_ifbbpro June 8, 1983 – May 21, 2020 Joshua D Foster passed away from natural causes while at home on the afternoon of Thursday, May 21. More Information will be posted soon. “This is very hard to post. We lost an amazing person and an awesome Pro Wheelchair Bodybuilder. I am shocked. I am at a loss for words. I will keep everybody updated. Nick Scott”

RIP: Joshua D Foster @jthefreak_ifbbpro June 8, 1983 – May 21, 2020 Joshua D Foster passed away from natural causes while at home on the afternoon of Thursday, May 21. More Information will be posted soon. Beautiful Graphic Designed by: @bigbanggraphics