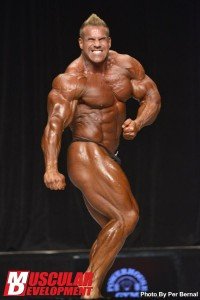 The 2013 Olympia weekend is over and I must say it was a fantastic event.

The one question I have is what is next for the four-time Olympia winner Jay Cutler?

Cutler does not have to prove anything to nobody as he has so many impressive victories, a very few bodybuilders can be compared to him.

Cutler’s sixth place finish is not a disappointment as it showed that he was enjoying himself and I am sure knew before the show that the competitors are on a different level. Especially his best friend Phil Heath.

Cutler can regroup and comeback next year bigger and better, but is it worth it? At 40, Cutler has a lot to think about.

He can retire now with few injuries and keep on going in the business of bodybuilding as Gaspari, Labrada and Coleman are doing now.

Regarding exposure, Cutler has no problems in that category. And his fan base will keep on growing as he is won of the greatest ambassadors to the sport of bodybuilding.

If Cutler keeps on going, I am sure he cannot train with the intensity that he did before he injured his bicep. That injury will always be on his mind, and that will make a difference for sure.

Whatever he does, we are all behind you Jay as you are a true champion, especially after your small speech yesterday!!