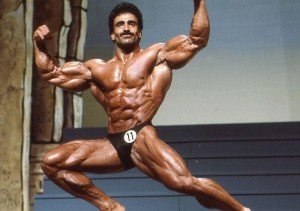 This week I came across an incredible photo of Samir Bannout when he won the 1983 Mr. Olympia. In this pose I could not help noticing how tight his midsection was.

I don’t want to take anything away from the modern Mr. Olympia winners as it is obvious to defeat the winner you have to beat them at their own game and be bigger.

I just wish that they could refine their physiques as in the 80’s and 90’s and get that midsection back to the way it used to be.

Look at the photo of Samir, he just looks incredible. He was ripped and he also had a fantastic back, one of the best that their ever was. To me he was the ideal Mr. Olympia.

I am not just saying Samir was the only one. You can also look at the physiques of Frank Zane, Bob Paris, Lee Haney, Shawn Ray, Lee Labrada, Flex Wheeler, Kevin Levrone and Francis Benfatto to mention a few. 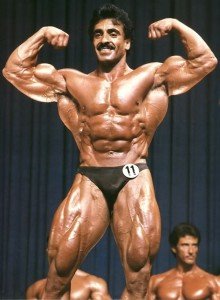 You can even look at Mike O’ Hearn, he has a great physique as well.

The minute Dorian Yates walked onto the stage, bodybuilding just went crazy. How the hell was a person going to beat Dorian. He even won when he had a torn bicep.

Then Coleman arrived and the competitors got even bigger.

The main reason definitely has to be the way the judges are deciding on the results. If just for one contest they started to look at the more refined physiques, things would definitely change.

Look at some of the physiques at the IFBB European and World Championships, they are just incredible. The problem is that these amateur competitors don’t stand a chance against the pro’s even when they win their Pro cards. There are some athletes at 80kg that look incredible and to me are worthy of a top prize in the Pro ranks.

Another aspect that has to be looked at as well is the health of these athletes. Just how much bigger can 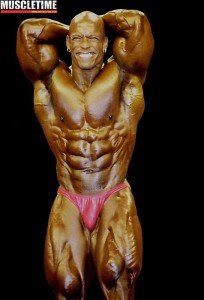 the Mr. Olympia competitors get? What are the physical limits? Kai Greene was much bigger than Heath, but he did not win. So what is Kai going to do next year? Look at Cutler this year, yes, he was toned down, and he was penalized for that but he still looked great.

Bodybuilding cannot be a freak show; it has to be a sport that the competitors have a vision of a perfect physique. So much is being lost. The front abdominal pose has been literally thrown away. Some competitors can’t even hold that pose any more. They are more occupied on trying to keep their midsection in.

So to end off I just would like to say again, I still respect the Pro’s today, but everybody has an opinion and this sport is based on criticizing and giving opinions on a physique. This is one of the reasons www.evolutionofbodybuilding.net was invented. To give a choice to new bodybuilding fans on what a real physique should look like.