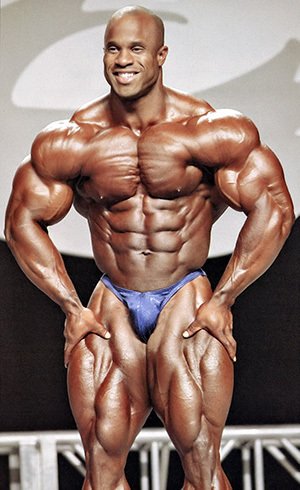 Till today, many say that Victor Martinez should have won the 2007 Mr. Olympia. Placing second behind winner Jay Cutler and two places ahead of 8X Mr. Olympia Ronnie Coleman.

Victor looked fantastic, Jay Cutler could have easily lost the contest and if Victor took the crown, who knows what different paths his life would have took. (Look at the photo…. just perfect)

As every bodybuilder fan knows, many things can happen to the body in the three days of the Olympia. An athlete can literally lose the title a couple of hours before stepping on stage. The body is an amazing thing and can change instantly.

And the 2007 contest was proof of that as Victor was on his way to victory but the night before the finals, Jay Cutler did his magic and came back on stage looking better.

In 2007, Victor had a physique that was easy to look at. You can easily compare him to Phil Heath. Victor was very proportionate; his small waist definitely was better than Cutler’s and had legs that would match Cutler’s as well. But when you are trying to defeat the reigning Mr. Olympia a lot of factors come into play.

Many say one of the reason’s Cutler won was because of his then affiliation to Weider Publications the co-promoter of the Olympia and MuscleTech the main sponsor of the contest.

Not taking anything away from Cutler as he is one of the greatest, a true example of a person that never gives up and he did defeat the reigning Mr. Olympia Ronnie Coleman.

Bodybuilding is a beautiful sport, but some decisions will leave fans and athletes talking about them for years to come.

After the 2007 Olympia, Victor had a very bad patch in his life and this is something I prefer not to talk about as everybody has his or her own problems.

Victor has bounced back from all of this and made it back to the Olympia stage. And this on it’s own makes you a winner.

Will he place in the top three? This we have to see as since 2007 the bodybuilders have again changed in many ways. But, if Victor does hit the right condition… You never know!

Some might disagree with my opinions on all of this, but my opinion of a perfect bodybuilder is not just freaky size and veins popping out of everywhere; it is a perfectly shaped body that is easy to look at and leaves no question in your mind of who the winner should be.