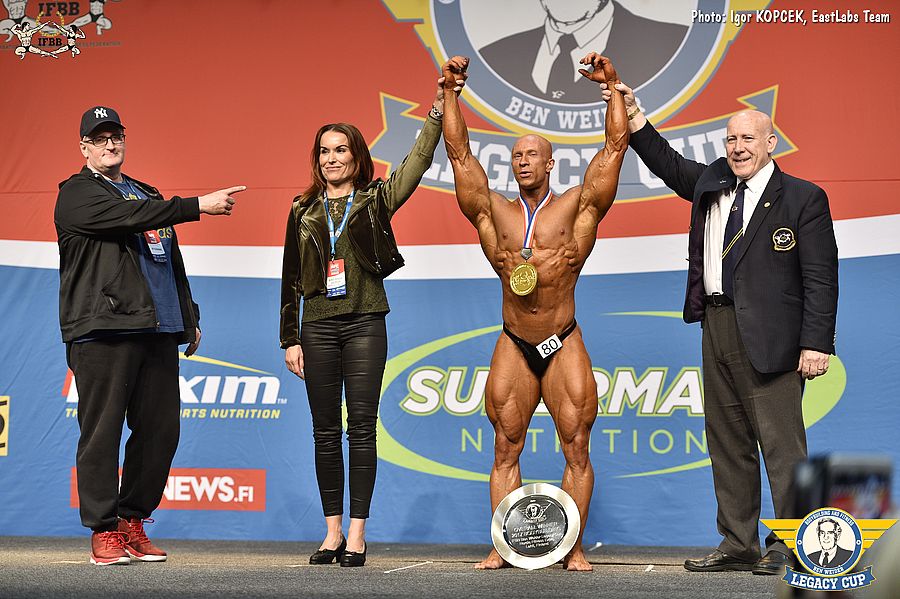 Finland loves Bodybuilding and Fitness but offers other excellent conditions for guaranteeing the success of an event. Not only great facilities and structures but, as well, a dynamic National Federation leaded by Mr. Ville Isola, Mrs. Aino-Maja Laurila and the experience of Mr. K.P. Ourama, the organizer and promoter of Nordic Fitness Expo (NFE).

Based on an strong and organized team, the 2nd. Ben Weider Legacy Cup celebrated in Lahti, 6th to 8th October, was a fantastic event with competitors from all the Nordic countries, beside several more from the South, Central a Eastern Europe.   It was, beside this, an historic weekend for IFBB, as the NFE held the first ever IFBB Pro Elite event, with two shows (Men´s Physique and Bikini) and 12.000 € in prize money for the Top 6 competitors.

It was another reasons to congratulate Mr. K.P. Ourama and the Finnish Bodybuilding & Fitness: the event was broadcasted by a national TV channel and, worldwide, as well, through video streaming from IFBB website: a huge audience that will make even more popular our sports, in Finland. Onneksi olkoon!

Bodybuilding it´s about muscles but not only about size and this was proved, one more time, with the amazing victory reached by ripped, symmetric and aesthetic Mika Sihvonen (Finland), over one of the Bodybuilding stars, in 2017: the young Blessing Awodibu (Ireland), more than 25 kg. heavier and undefeated this season, until the Super Final at the Ben Weider Legacy Cup.

Sivhonen won easily his category (Middle Weigh; -80 kg) with a perfect score in every round, showing an amazing body, full of muscular details. Qualified for the Super Final, he meets there others 3 fantastic winners: Piotr Borecki (Poland), one of the most aesthetic athletes who won the Light Heavy Weight (-90 kg), as well with a perfect score (5 points); team mate Antti Halmo (Finland) who progressed during the competition until reaching the Gold Medal in the Heavy Weight (-100 kg) and the massive Blessing Awodibu who this year took already overall titles in Slovakia, Portugal and Spain after winning in the Super Heavy Weight category (+100 kg.)

After a double session of mandatory poses and an amazing posedown for the audience, the judges chosen the lighter winner, Mikha Sihvonen as the overall winner, defeating Awodibu by 3 points of difference (6 to 9 points) as well Halmo (15 points) and Borecki (20 points). A cheering audience celebrated the decision, not only because the nationality of the winner but as well because the victory, one more time, about quality over size. 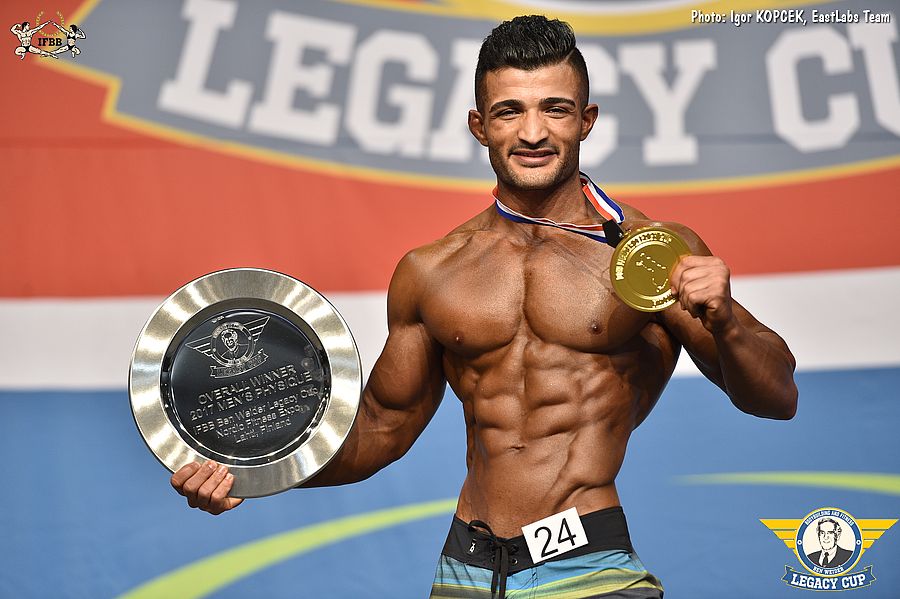 Men´s Physique was the largest discipline in the recent Ben Weider Legacy Cup Lahti and Finland was the most successful country, thanks to its winners Sherko Eliasi (Short Class) and Momar Bah (Tall Class). Joining them, the Ukrainian Dmitro Horobets got the Gold medal, in the Middle Class, bringing a great battle to the audience for the overall title.

In a very split decision, Sherko Eliasi won by majority, with an score of 7 points, over Horobets (10 points) and Bah (13 points). Eliasi and Horbets will continue his particular battle for the Top of the Elite Ranking, joined by Portuguese Fabio Rodrigues, after his victory in Muscular Men´s Division. 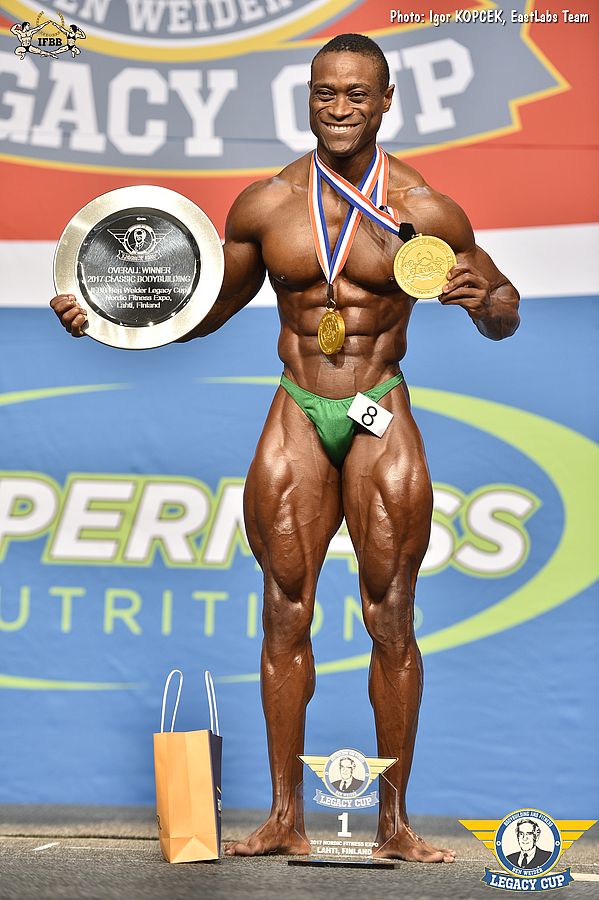 With his amazing muscular quality and proportions, the current leader of the Classic Bodybuilding Elite Ranking, Aristide Mbomni (Germany) won the Gold medal in 2nd. Ben Weider Legacy Cup (Lahti), defeating other 12 athletes in an Open category that was a real “battle of great genetics”.

Mbomni won a new event this season and raised up to 30 points in the Ranking, with a perfect score from judges (5 points in every round). Nevertheless it was not an easy title: in front of him it was another gifted athletes as Narudeen Adedorja (Finland; Silver medal) and Reno Banks (United Kingdom; Bronze medal), who presented a great battle for the audience. 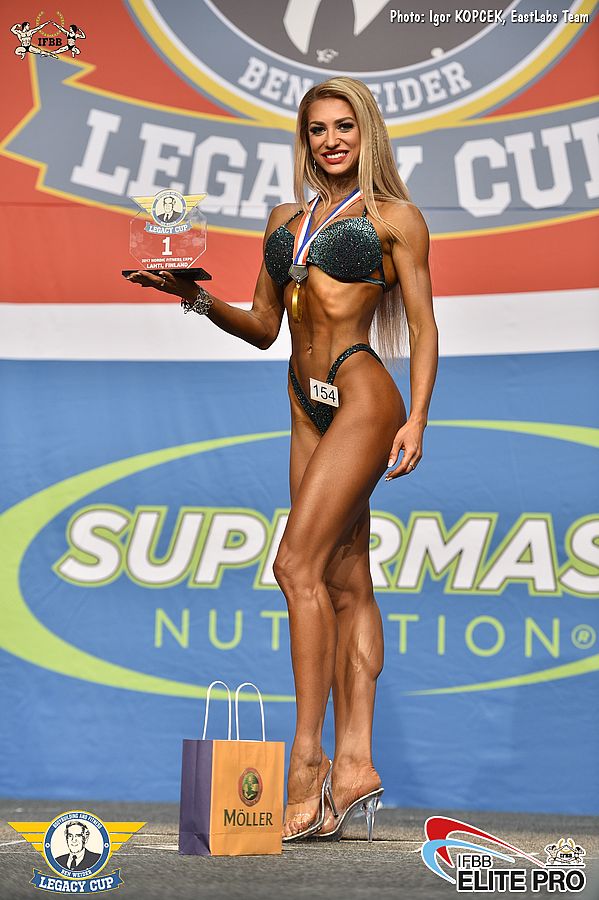 Amazing competition in Bikini Fitness, at the 2nd. Ben Weider Legacy Cup (Lahti; Finland) with 5 categories crowded of Elite ranked competitors and with respective winners offering a close battle for the overall title and the 3 Pro Elite Cards offered.

In the Short Class (-160 cm), the Ukrainian Hanna Skvortsova won the Gold medal, almost with a perfect score from judges (6 points) with her symmetric and athletic body, defeating by only 3 points (9 points) the complete Turkish athlete, Deniz Saypinar (Silver medal).

In the Short-Middle Class (-164 cm) very similar situation with the new Finnish star Melina Keltaniemi winning the title with 6 points of advantage (6 to 12 points) over Russian Mayya Leonenko (Silver Medal).

Victory without discussion, in the Middle Class (-169 cm) for the Elite Ranking co-leader Oksana Brygidir (Ukraine), with a perfect score from judges (5 points). The battle in podium was for the Silver Medal with Slovakian Timea Trajtelova defeating by 2 points (14 to 16 points) Russian Daria Vassilets (Bronze).

Similar situation in the Tall Class (-172 cm) with the solid victory of Natalia Petruska (Hungary), reaching the Gold Medal with 8 points of difference over Estonian Jana Teder (7 to 15 points) and 11 points over Finnish Jonna Nygrén-Jantti (18 points).

In the Super Tall Class (+172 cm), it was not place for the surprise and the other Elite Ranking co-leader, Natalia Lugovskih (Russia) took a new victory this season, with another perfect score from judges (5 points). Young raising star Ioana Estrellita Sulea (Romania) took the Silver medal defeating aesthetic Phoebe Hagan (United Kingdom) in another interesting battle for the podium.

In the Super Final, Brygidir and Lugovskikh performed another very close battle for the overall title and finally it was the Russian athlete who, as did in the European Championships, took the main title and a place in the history of 2nd. Ben Weider Legacy Cup Lahti. 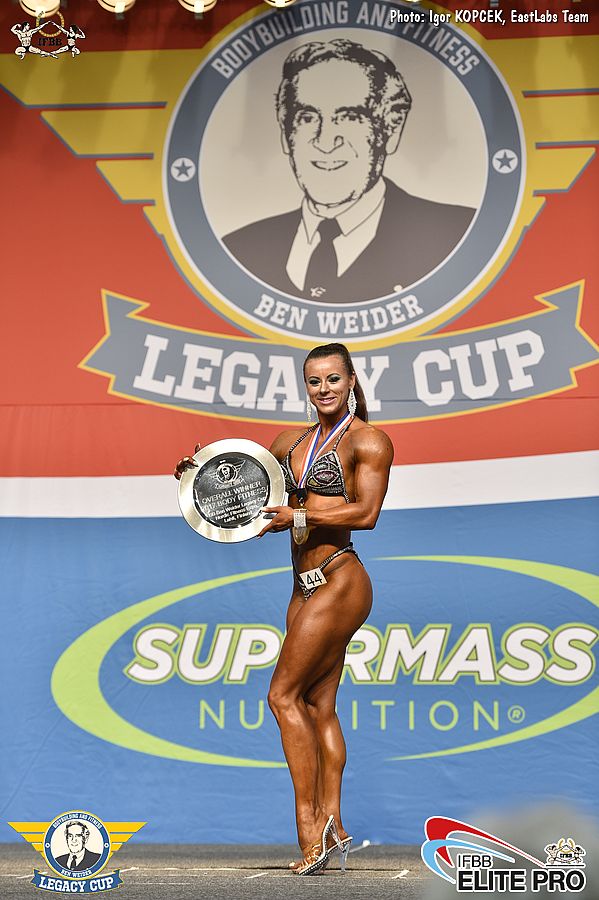 The Polish Bodyfitness athlete Anna Nawrot became in one of the stars of the 2nd. Ben Weider Legacy Cup celebrated, in its first session, on Saturday 7th in Lahti (Finland).

In a close battle for the gold medal, in the Middle Class (-168 cm), with Spaniard Silvia Guillén; Anna Nawrot won took 2 points of advantage (8 to 10 points) to her main rival and won the first award, with Finnish Hanna Saario (Bronze medal) completing the podium.