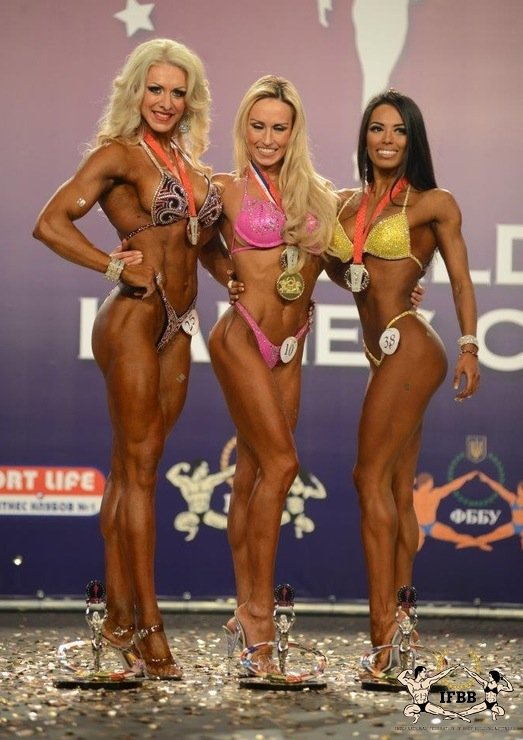 Sunday afternoon, April 13, 2014, at the ACCO International Exhibition Center in Kiev – the same venue that hosted the last year’s IFBB World Women’s Championships – unusual trophies were presented to this year’s IFBB World Ladies Cup winners.
The Women’s Worlds runner-up Liudmila NIKITINA (Russia) was announced the best Women’s Fitness star. She won the overall battle over the short class winner, 2008 European Champion Vera EGOROVA (Russia) who returned the stage after a few-year break.
There were two great stars in Women’s Bodyfitness: Arnold Europe and Arnold North America winner as well as 2013 European champion Angela DERZAPF (Germany) and 2013 Women’s Worlds overall winner Olga KARAVAYEVA (Ukraine). First, Derzapf won after a very close battle her category up to 163 cm over the 2013 world champion Antonina BEREBENIA (8:9) and later on she met with Karavayeva in the overall battle. The final result of this tough duel of the current greatest world bodyfitness stars was: 8:8. The Relative Placement Method had to be used to solve this tie and it has brought the final victory to Karavayeva.
Among four bikini fitness categories winners we can see 2013 Women’s Worlds 3rd place winner Olga VIAZMETINOVA (up to 168 cm), 2013 IFBB World Cup winner Alla SEMENOVA (up to 172 cm), 2013 Amateur Bikini Olympia 3rd place winner Kseniia SHEVELEVA (over 172 cm) and the greatest sensation: the short class winner Sofiya TANDILYAN (Russia), whose greatest previous achievement was the 3rd place at the Russian National Championships. And this new gifted girl from Kaliningrad won the hard battle against much more experienced champions, starting her big international sport career.
The last accent of this year’s World Ladies Cup was a farewell banquet at the stylish Ball Room of the “Bratislava” Hotel in Kiev, where the winners as well as the finalists were presented with thousands of US Dollars money awards. Ukrainian Bodybuilding and Fitness Federation under the leadership of Igor Deliev, supported by sponsors represented by a well-known bodybuilder Oleg Korkosenko, has done the next great international event and did it in a very impressive style.