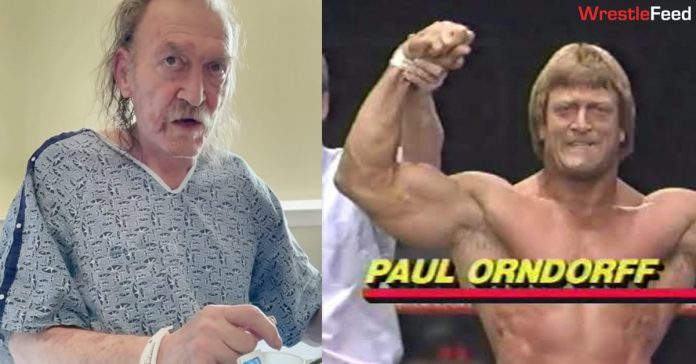 Paul Orndorff the legendary wrestler has passed away at the age of 71, the news was confirmed by his son Travis.

His son Travis made the announcement Monday on Instagram, where he has documented his father’s recent health struggles.

“It is with great sadness that I announce the passing of my father, Paul Parlette Orndorff Jr. He is better known as ‘Mr. #1derful’ Paul Orndorff,” Travis wrote.

“Most of you will remember him for his physique. Many will remember his intensity. But if I could only get you to understand and see his heart. He will always be Pop, Paw Paw, and Daddy at home. And as much as many of you hated him as a wrestler, he absolutely loved you for it. He was an amazing father that showed me more love than I ever deserved. I love you Daddy.”

Orndorff’s son had previously said that his father was suffering from dementia, which Travis believed was the result of the brain disease CTE.

In 1985, Orndorff was part of one of the most pivotal moments in pro wrestling history, teaming with Roddy Piper in a tag team match against Hulk Hogan and actor Mr. T at the first WrestleMania.

Orndorff, who was managed by Bobby Heenan in the WWF, was one of Hogan’s most memorable opponents and their feud was among the most financially successful live event programs in WWE history. Hogan and Orndorff headlined WWF’s The Big Event at Toronto’s Exhibition Stadium in 1986 and later faced off in a steel cage match on an episode of Saturday Night’s Main Event that aired on NBC in 1987.

Orndorff’s pro wrestling career began in 1976. His run as a full-time performer ended while he was wrestling for WCW in 1995, and he retired from pro wrestling in 2000. Orndorff suffered from arm and neck injuries that caused his right arm to atrophy and led to the end of his in-ring career.

Orndorff was inducted into the WWE Hall of Fame in 2005.

Orndorff was part of a class action lawsuit that was filed against WWE in 2016 by a group of wrestlers claiming the company failed to protect them from concussions. The suit was dismissed in 2018.

Before his time as a pro wrestler, Orndorff played college football as a running back for the University of Tampa. He was drafted by the Saints in the 12th round of the 1973 NFL draft and went on to play one season in the World Football League.

Evolutionofbodybuilding.net send out deepest condolences to the family and friends of Paul Orndorff during this difficult time.