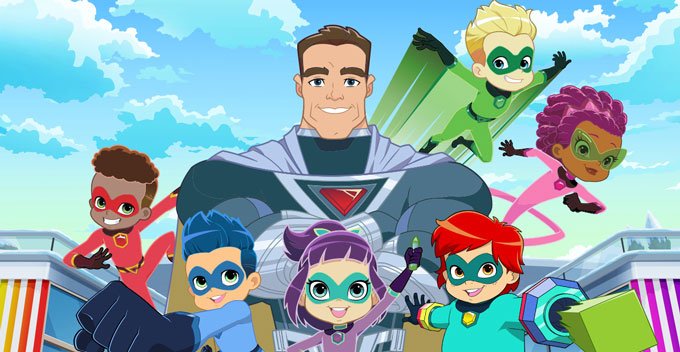 Arnold Schwarzenegger is not only a legendary bodybuilder and Hollywood star, but he has now a cartoon hero on his new show Superhero Kindergarten.

Arnold Schwarzenegger is known for his decorated bodybuilding career and his very popular films, dominating the industry throughout his entire life.

Schwarzenegger is also known as the former Governor of California, running the state between 2003 – 2007.

If he was given the chance to run for President, he would have surely put all his energy into reaching that goal, but unfortunately, he is not a natural-born citizen of the USA.

What more can the greatest bodybuilder in the history of the sport do? Well, Arnold decided it was time to create a new cartoon series based on his very successful film ‘Kindergarten Cop’

Schwarzenegger plays the character as a gym coach who acquires incredible superpowers from a mysterious comet and becomes Captain Courage, one of the earth’s greatest protectors. He works ‘undercover’ as a kindergarten teacher to raise a new generation of super-powered kids.

The idea of this cartoon series was first discussed between the late Stan Lee and Arnold Schwarzenegger.

“Years ago, Stan Lee and I spoke of such a project, and I’m excited to finally bring great storytelling to kids around the world, which will also promote lessons of health, exercise, fitness, and anti-bullying,” commented Arnold Schwarzenegger.

In addition to his likeness, Schwarzenegger lends his voice as the lead character in the series. Co-creator of Deadpool, Fabian Nicieza, who has sold over 100 million comics worldwide, is scripting the series.

The new show will be available on Amazon Prime and has also premiered on Kartoon channel on 23 April, 2021.