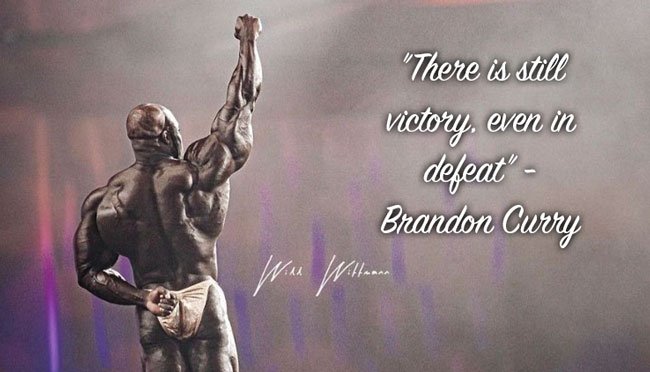 “There is still victory, even in defeat” – Brandon Curry.

It can be said that Brandon Curry is one of the most humble athletes to ever represent the Mr. Olympia title.

Brandon earned the right to be called Mr. Olympia in 2019 when he won the title, becoming only the 15th bodybuilder in the history of the sport to win the title.

Some say he won it because he had no competition and others believe he was at the right place at the right time, but this is all nonsense.

At the 2019 Mr. Olympia, Phil Heath and Shawn Rhoden did not compete, but athletes such as Cedric McMillan, Roelly Winklaar, Hadi Choopan, William Bonac, Luke Sandoe (RIP) and many others were in the mix and they did not win.

Going into the 2020 Mr. Olympia, it was evident that Brandon had to improve, if he wanted to keep his title.

2020 had the return of 7X Mr. Olympia Phil Heath and as well a special invite went to Big Ramy.

At the 2020 Mr. Olympia, the fans and media witnessed a much improved Brandon Curry, but the best version of Big Ramy was just on another level.

Brandon had to settle for second with the consolation that he did place higher than Phil Heath.

Losing his title must have destroyed the 2019 champion, but he accepted the defeat, congratulated Big Ramy and immediately started to look ahead.

In a recent post on his official social media pages, Brandon Curry opened up about his defeat and explained what he was feeling in detail.

Rest assured we can all expect Brandon Curry to fight for his title in 2021.

There is still victory, even in defeat.

Mission accomplished in more than 1 way. My coach @abdullah_fs_alotaibi and I gave it everything we had and were able to bring a completely brand new package. I made every sacrifice required of me to be at my all time best and I have peace with that…we can only control the things that we are given control over…and although what I brought wasn’t good enough to retain the title as Mr. Olympia 2020, once a Mr. Olympia, always a Mr. Olympia.

Thank you to all of my fans all around the world for continuing to push me to be better. For loving and appreciating me for what I bring to the table both on and off the stage. I do this for y’all!

Thank you to my coach @abdullah_fs_alotaibi for bringing out the best in me. Thank you to @bader_boodai for supporting me and the entire team at @o2_gyms!

Thank you to my family and friends for having my back no matter what. Thank you to my sponsors @gorillawearusa @schieksportsinc @protan_official @solepremise @markrussellco and my business partners for continuing to believe in me and support me both on and off the stage! Thank you to the IFBB Pro League and the Manion family for holding it down during this crazy year 2020, and for providing such an incredible platform for us athletes to stand on with pride in a sport that we love! Thank you to the new @mrolympiallc owner @jake_wood_wos for not giving up and pushing through to make the show happen for us as athletes and also for the fans to have something to push for and look forward to in such a trying year! We truly appreciate all that you have done. Thank you to @dansolomon_official and the entire Olympia staff for doing such an incredible job putting a great show together.

This one will go down in the history books!

In the words of the great @schwarzenegger “I’ll be BACK!”

Brandon was and still is a great ambassador for the sport of bodybuilding and the Mr. Olympia.

He went to as many places as possible to promote the sport, when it was possible, before Covid-19 devastated the world.

Evolutionofbodybuilding.net would like to congratulate No. 15 Brandon Curry for all that he has done and we expect him to continue motivating and inspiring all athletes in the future.