WATCH: Phil Heath’s Shoulder Workout 27 Days Out From The 2018 Mr.Olympia.

Phil Heath is going into the 2018 Olympia Weekend with the goal of winning his eighth Olympia title, and entering an elite club that only two people have the honor to be in, Lee Haney and Ronnie Coleman.

Phil Heath was in Pittsburgh and he trained shoulders at the NPC Photo gym 27 days out from the 2018 Olympia Weekend.

Phil Heath is looking as he in on the right track to defend his title. From the video footage it looks as he is going for more of a streamlined look.

Not to be misunderstood, Phil Heath will still be massive, but it seem he will not be having a problem with his mid-section this year and he may present the best look since his first Olympia victory.

Big Ramy will still offer a challenge as his incredible size will noticed by the judges, but size is not everything. 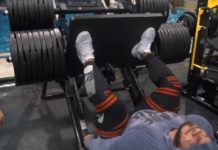