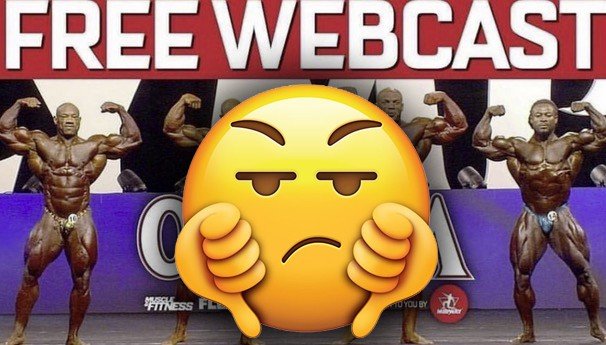 The people that managed to make it to the show in Vegas were the lucky ones in 2018. They managed to see the entire show without any problems.

The bodybuilding and fitness world had to wait till approximately a month before the 2o18 Olympia Weekend to find out where and when the Webcast was going to be streamed.

In recent years, the webcast was sponsored by Amazon, and it was a perfect.

This year, the webcast tender was won by iHerb. The same cannot be said regarding the service.

Obviously iHerb had their products splashed everywhere, but when it was getting closer to the main event, the open class bodybuilding pre-judging, the service cut out completely.

The major bodybuilding forums were flooded with fans complaining about the feed cutting out.

We must thank the Olympia organizers for the free service, but in reality it would be better if they charge a small fee and the fans get a perfect service without hiccups.

It is a shame for such a prestigious event to have something like this ruin everything for a majority of the fans.

Obviously, the Olympia organizers are very strict about copyright, and this could be the reason they do not use a service such as Youtube. They have the resources to make this a problem free job.

The Olympia organizers will notify you for the simplest copyright infringement. This is fair, but what is not fair is the fans and the VIP area Live streaming the event to their personal Facebook and Instagram pages from the event. Where is the authority!!

The organizers will definitely say that the servers were overloaded with all the traffic… this is bullshit, they should of prepared for this, it is 2018, the technology is available.

AMI, the owners of the Olympia brand should know what it takes to produce a good product. They should seriously investigate what happened on the first day of the webcast and solve it before Saturday evening!!

A shame the bodybuilding world could not here the commentary of Shawn Ray and Dan Solomon. It ended up with these two guys talking to the wall as nobody could listen to them.

As well to add to all of this, Flexonline.com and Muscleandfitness.com are still blocked in major parts of Europe.

This was truly unexpected!!

A person well known in the industry also vented his frustration on his personal Faceebook page. (All comments were made public)

Here are some comments from the official Flex Online Instagram page:

flex_magazineTune in NOW to catch the Fitness, Figure, and Classic Physique finals and the 212 and Mr. Olympia pre-judging LIVE at iHerb.com/Olympia. Don’t miss any of the action! @iHerb@MusclePharm@MrOlympiaLLC

rayvictory__Live stream sucked! Next year have someone else do it.

dylanferriansWaited a whole year to be disappointed

chrisjuslexIherb sucks ass no company should associate themselves with them lol

mcit1974Streaming not working at all

mo5304If it wasn’t for @bigdjamesnobody would have seen the Olympia. Dude single handedly displayed it to 10k plus viewers. Fix the stream before tomorrow PLEASE!!!!!

npcathletechrisFreaking dumb stream, mine cut out all throughout and didn’t come back on after heath went up

stackz_nd_iron_Pathetic!! Wait for the worlds biggest bodybuilding show of the year and can’t even watch it because @mrolympiallccan’t find a proper way to live stream @mrolympiallc in order to satisfy fans around the world . @iherb you took a big loss tonight but so did @mrolympiallc

halfasianbrahIFBB should have stream with potato rather than with iherb🤣🤣

thomas_the_obscureFuck iherb. What a joke.

mr_dowork@ironvixxen. It was horrible. I thought the same thing until I went to @mrolympiallcIG page and saw all the comments. They really messed this one up this year. 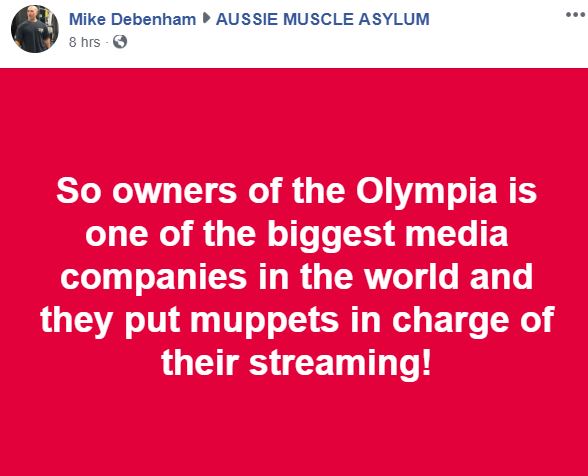