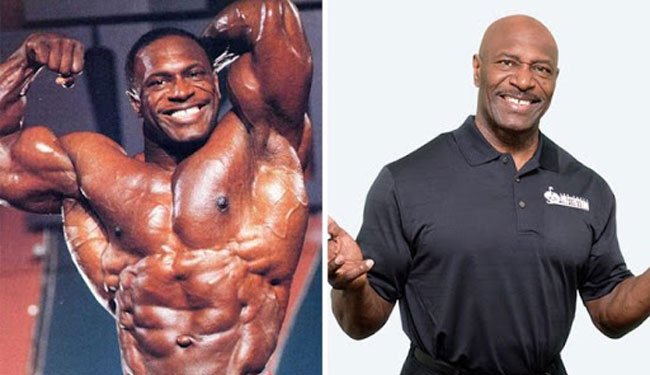 8X Mr. Olympia Lee Haney is one of the most respected bodybuilders in the history of the sport.

When the public and media talk about the ideal Mr. Olympia ambassador, Lee Haney’s name is always the first one mentioned.

In his latest interview with London Real’s Brian Rose, Lee Haney revealed some very interesting points of his life and bodybuilding career. Also he was very critical of the modern day bodybuilder.

Lee started bodybuilding at a very young age and entered his first competition at the age of 16.

Lee Haney stated winning amateur shows from the age of 18, going on to win the first ever NPC National Championships in 1982 and as well the IFBB World Championships.

Haney dominated the Olympia stage between 1984-1991. He won eight consecutive Mr. Olympia titles, a record only equaled by the great Ronnie Coleman.

In his last Mr. Olympia competition in 1991, Lee defeated the young Dorian Yates. Dorian would go on to win six consecutive Mr. Olympia’s from 1992 1997.

“I entered my first bodybuilding show when I was sixteen years old,” Haney said. “Did very well, didn’t win, didn’t place, but I was told by the judges that I had a lot of great potential. I continued to follow those principles, I learned as much as I could about nutrition through reading magazines. I grew up in the country where sweet potatoes and yams were a mainstay. So were pinto beans, so was corn, so was chicken, so was eggs, so all of the good quality nutrients were there from day one, just from growing up where I’m from. By implementing the training principles, good basic nutritional principles, I was able to imitate what I had read about, and my physique continued to grow and get better and better.”

“A couple of years later, I entered the Mr. Palmetto, won the show at the age of eighteen,” Haney explained. “I beat guys that were in their 30’s and their 40’s. Then I went on to win the Mr. South, and again at age eighteen. Because of having great information, because of following very good nutritional guidelines, I was able to supersede guys that were older than me, because of my willingness and desire to follow the science that had been handed down to me by some of the legends of bodybuilding.” – Lee Haney

Haney says he was blessed as a young boy by having a great family environement and as well having the best nutrition on a daily basis.

Thanks to his grandparents farm, Lee had the best food at his disposal on a daily basis.

When Lee started bodybuilding, his great genetics were evident at a early age.

Throw in the good nutrition that he was already used to having, Lee started his bodybuilding career on the right track.

Speaking about his beginnings, Lee explains that there was very little information and coaches did not exist.

All the information Lee could get about bodybuilding and nutrition came from magazines and the people he trained with.

“It was during an era where there was very little information out there,” Haney explained. “During that time, the magazines mainly consisted of training and nutrition. It wasn’t as commercialized as you see them now. So it was all about real, good quality knowledge. Another thing that was very good, growing up in my home town, you would find some of the older guys in the gym, and they would share with you some different training principles. ‘Okay, you want to do this, you don’t want to do that, that’s too much weight you’re using,’ and those kinds of tips and principles that were handed down through the generations, helped me to become the person that I am today, as far as my knowledge of training and knowledge of nutrition.”

“At the age of 11 years old, I asked my parents for a set of weights for Christmas, and they got them for me,” Haney continued. “Inside that little package of weights, there was a Charles Atlas book that had the basic principles of training, mainly one exercise per body part. They were foundational exercises, and from those foundational exercises, everything else grew, but I stayed true to the principles that I had read there, which also matched up to the principles that were being given to me by the other senior weightlifters that I met.” – Lee Haney.

Becoming an ambassador of the sport

Being at the top of the game will not last forever. Lee knew it was the right time to step away from the competition stage after his final Olympia victory.

Lee believes the career of a bodybuilder does not end when he or she stops competing.

Sharing the wealth of information with the younger generation is a very important part of Lee Haney’s life.

Lee is passionate about pointing the younger generation of athletes in the right direction and teach them how to train in a way that won’t destroy their body.

Some professional athletes do not know when to quit, destroying their body trying to stay on top.

Lee Haney believes it is best to take care of your body so that you can have a future of good health.

“We’re finite creatures, we’re not going to live forever,” Haney said. “If we can use what we accomplished over the span of our lifetime as a competitor, to impact the life of other young athletes, other people, then man, what a thrill to do so. That’s what’s so cool about the second half of the journey; being able to impact those younger athletes and point them in a direction of being successful at it. But also letting them know too, that this doesn’t last forever and you need to do it in such a way that you don’t destroy your physical body. At the end of the day, you still want to be functional. You want to enjoy your grandkids as I am.”

“Your health is your wealth, and you want that at the end of the day.” – Lee Haney

Critical of the modern day bodybuilder

Bodybuilding has changed a lot since the days when Lee Haney, Rich Gaspari and Lee Labrada dominated the stage.

Back in the 80’s the bodybuilders were conditioned more, but at the same time not as big as the modern day bodybuilder.

When Lee Haney finished his reign as 8X Mr. Olympia, a much bigger and conditioned Dorian Yates started a new era in bodybuilding.

The difference between Dorian and the mass monsters today is that Doreen brought size and condition to the stage.

Today’s bodybuilders are much bigger, but a majority of them have trouble matching condition with their size.

“The lack of the proper training principles has caused the physiques of today to be bigger, but lack quality,” Haney explained. “You see, a lot of guys look like mutants. With Dorian (Yates), of course he was a mass monster, and then as you saw Ronnie (Coleman’s) mass, and Jay Cutler, you still didn’t look like a mutant. Things were still proportioned. It was larger, but Dorian’s physique still had symmetry and balance to it.”

“That’s what you don’t see now,” Haney added. “You see guys with little calves and big thighs. You see a guy with huge shoulders, but be a narrow width or high lats, because the ability and tools and the knowledge to develop a complete physique, with everything where it’s supposed to be…are not there in the training principles that we adhered to, growing up. Totally different.” – Lee Haney.

Watch the Full Version of this interview HERE (Free Subscription)