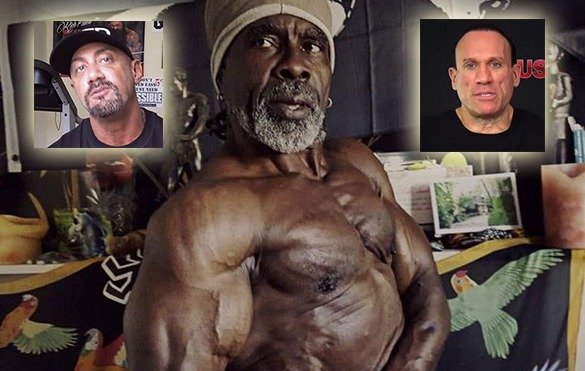 In the last couple of days, a lot of unwanted controversy has been haunting bodybuilding legend Robby Robinson.

We at evolutionofbodybuilding.net had originally decided that we would keep away from this one, but when we watched the videos posted by Jerry Ward and Dave Palumbo, we decided we had to give our opinion on this.

Robby’s good friend started a GoFundMe campaign to help Robby cover costs for the treatment he is going through regarding Sickle cell Anemia.

The goal back in February 2019 was to raise $7,000 and thankfully that target has been reached.

As Robby continuously needs funds, they have increased the goal to $25,000.

Nobody complained or criticized this. What we don’t agree with is what happened afterwards.

Evolutionofbodybuilding.net received many messages that they saw Robby at Gold’s gym training.

What’s the problem if Robby is training while he is getting treatment? Probably, if Robby did not take care of himself, this disease would of killed him many years ago. What is wrong with Robby taking care of his clients? It is most probably the only source of income that he has.

The real controversy started a few days when Robby published a post on his official Instagram page.

A person asking $1 from all their followers or a entire nation is not something new.

Robby is not a young man, and most probably he did not express himself the way he wanted to when he wrote these posts, but if you read them carefully, you can understand his message.

What we at evolutionofbodybuilding.net thought was shocking was the video that Jerry Ward published regarding Robby Robinson.

Jerry showed that he has no respect for Robby Robinson in the way he conducted himself in his video. If Jerry thinks swearing every 5 seconds makes him a bigger man, he is truly mistaken.

Jerry has literally showed he has no respect for the history of the sport and the people that made the sport what it is today. Robby Robinson is bodybuilding, and he has done more in his life than the majority of stars will ever do.

Robby has been going through treatment and blood transfusions on a regular basis in the last couple of months. What is so wrong when an athlete asks for help from his fans?

Jerry comparing Robby to modern day bodybuilders regarding income is another low blow. Anybody who again knows the history of bodybuilding knows the sport of bodybuilding did not pay well in the past. Even winning the Masters Olympia could support an athlete forever.

Jerry boasting that he has more followers than Robby is a bit childish as well.

After Jerry published his video, Dave Palumbo apparently contacted Robby and explained the situation of his show.

In the meantime, Robby has apparently threatened to sue Jerry for his allegations. The situation is becoming very sad.

Now, Dave Palumbo has invited Jerry on his show next week to give space to Jerry to explain his thoughts on the situation in more detail.

To many, it is looking as Jerry and Dave are taking advantage of this so called controversy that they invented to get more viewers to their pages.

To be honest, Jerry and Dave are tarnishing this campaign that was created for Robby by his good friend Chad Schaive.

Below you will find Robby’s comments and as well the video of Jerry Ward and Dave Palumbo.

https://www.gofundme.com/f/robby-robinson-medical-support This PHOTO was taken this past Monday. After a 50minute Chest workout . Then off to the hyperbaric chamber hospital for two-hour sessions . To help increase my Red blood cell count OXYGEN LEVEL. Slowly but surely positive things will happen .PROBLEMS ARE THE cutting edge that distinguishes between SUCCESS and FAILURE. PROBLEMS… CREATE OUR COURAGE And WIDSOM.. If EVERYONE of My 71.1 thousand FOLLOWERS have not donated $1.00 to RRGofundbme ., I AM DISAPPOINTED .. Then it is time I cancel my. Face book and Instagram pages . I though we were team. You guys have a great day.—RR

To the person that post that. I punked out my Instagram Fans is looking for a place to hangs his hat. I asked all my Instagram fans to give $1.00 because they are my team. I communicate with my fans daily making comments asking there training questions For free. Not charging consultation a fee $99 I totally enjoy answering there question pumping them up mentally with positive quotes. My plan is to slowly come down off face book and Instagram due my sickle cell Anemia crisis . My apology for asking my teams support . A client just came to my face book and donated $5,000 there are many who respect me .that’s the most important thing having there support. Robby ROBINSON

To All my Instagram fans . I asked for support from my 71.2 IMSTAGRAM-FOLLOWERS”. It. Is ashame people can make it dirty that I asked for my followers support. $1.00.,Then I get a message from someone else . he has attacked. this is the same person attacked – 6 mr Olympia Dorian YATES …Training partner Yes that’s Jerry Wardii he is an asshole.. is the message. I just received . I have always felt. If I cannot do Are say something GOOD ABOUT YOU, then I say nothing . I understsnd JERRY WARDII . Wants to make a name for himself, and the only way he do so is Bad mouth me and Dorian—-.Shad my friend set up the gofundme. He controls what goes on … mr wardii should get the correct information down before going live on utube . Mr wardii Be Bally’s contact me 424-254-4455! mr wardii utube video is in the hands of my attorney . JERRY WARDII . I wish you all the success ROBBY Robinson