1983 Mr. Olympia Samir Bannout has been very vocal on his official social media pages about the state of bodybuilding.

Samir heavily criticizes the condition and methods of contest prep of the modern day bodybuilder on a daily basis.

Everybody has their right to an opinion and the majority of the bodybuilding world agree with Samir.

Samir published a number of photos with his best poses and said “Ditch today’s coaches”.

The bodybuilding world is full of coaches with some of them guiding athletes to become the best in the world.

In the past, the top bodybuilders rarely trained alone and a coach was not needed because everybody helped and gave advice to each other.

Looking at the era from Arnold all the way to Lee Haney, training footage shows the majority of bodybuilders training together.

The modern day bodybuilder is more isolated and it is very rare to see them train with training partners or in groups.

That is when a coach is needed. The coach today can help keep the athlete on the right path with training advice and as well as mentor.

Shawn Ray is a consistent supporter of Samir as he ‘Likes’ and comments on the majority of his posts.

Shawn Ray is on record of saying that he never needed a coach.

Evolutionofbodybuilding.net contacted a number of coaches and asked them what they think of Samir’s comments.

Neil Hill, Hany Rambod, Nick Trigili and Milos Sarcev gave this website their opinion about Samir’s comments at the time of publishing this article.

“Samir is not saying ditch ANY coach…if you read he said: find someone sane that truly understands nutrition and the sport of bodybuilding the way it should be.”
I am sure Samir coached many guys as well…and I believe he is referring to expansion of unqualified coaches that are prevalent nowadays.
Every (especially elite) athlete in every sport needs coaching…

People are just too sensitive nowadays…I don’t find Samir remark offensive whatsoever…as I know where he is coming from. Most of us (old timers) did all by ourselves…End we learned along the way…Today is different, there are many coaches with lots of experience and acquired knowledge that can share with others… I sure wish I knew 35 years ago things that I know now…or have access to a GOOD coach back than. It would save me a lot of time.”

“I think it’s irrelevant what Samir thinks. He’s not a bodybuilder in today’s day and age. They didn’t know all the science we know today about training, nutrition and hormones. It was way different back then. Their diet back then was ‘cut carbs and water, deplete for shows”‘ he wouldn’t know what the f*** to do in today’s bodybuilding world . Dead fish.”

“Everyone is entitled to there views. Ultimately I know how much positive impact I have with my clients success.”

“Everyone is entitled to their opinion.”

Samir won the Mr. Olympia in 1983 and he has the right to express his opinion, but attacking all coaches is not the right thing to do.

Some coaches are doing something right by guiding athletes to multiple Olympia and other bodybuilding titles.

With so many temptations to take the wrong path, a trustworthy coach will surely guide their athlete in the right direction. 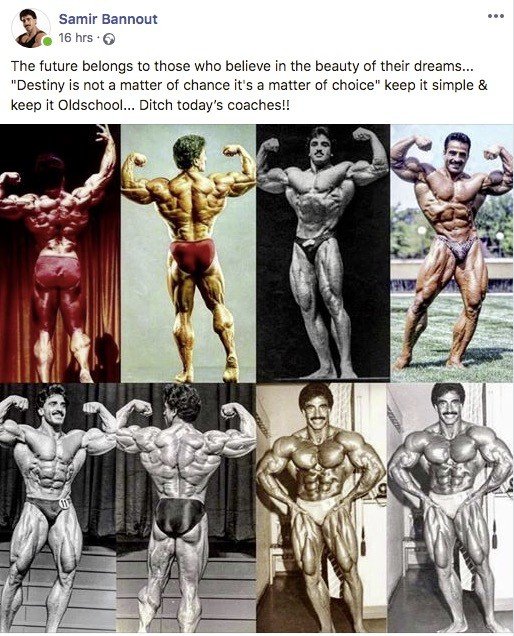