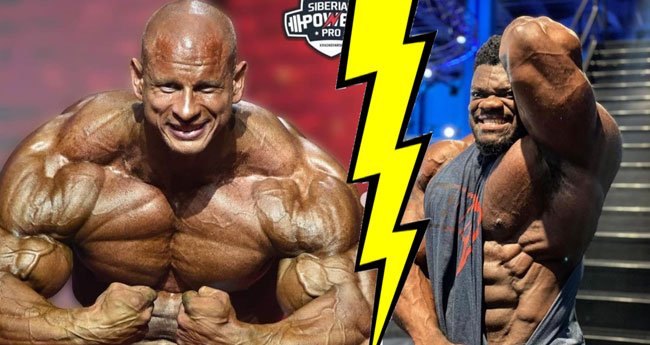 Michal Krizanek and Blessing Awodibu debate who has bigger biceps.

We have become accustomed to ‘The Boggieman’ Blessing Awodibu trading words with fellow competitor Nick Walker in the lead up to the 2021 New York Pro.

It seems that Blessing Awodibu has found another athlete to trade words with on social media.

Michal Krizanek is one of the biggest and most successful athletes within the IFBB Elite Pro League.

After Blessing posted a video of his biceps on his official Instagram page, Michal could not hold back and made a comment. This would start a entertaining battle of words.

Blessing Awodibu: “Michal, say it to my face”

After a number of fans had their say on the subject, Michal continued:

Blessing then answered a comment stating that one day they should compete against each other:

Blessing Awodibu: “I already destroyed his ass back in 2017 wasn’t even close.”

To shed more light on this, Evolutionofbodybuilding.net contacted Michal to get more information about their competition against each other as amateur’s.

Michal confirmed that they competed for the first time in 2017 at the IFBB Diamond Cup in Ostrava. Michal placed second to an already experienced amateur Blessing Awodibu.

That same year, Blessing earned his Pro Card to compete within the NPC/Pro League. In fact, Blessing was the last competitor to turn pro at the 2017 Arnold Classic Europe, before the IFBB Elite Pro was formed immediately afterwards.

The following years would see Michal climb up the ranks at a fast rate and dominate the sport and become one of the worlds most popular bodybuilders.

Michal can already be called a veteran bodybuilding with his experience and success at such a young age, compared to Blessing who still has to step on stage as a pro athlete.

As the conversation continued, one reader asked Michal to switch over to the NPC, but he sarcastically said he is scared.

This is probably the first time a bodybuilder from the IFBB Elite Pro League challenged a NPC/Pro League athlete.

Hats off to Michal for challenging the competitors on the other side of the wall. This shows that Michal is full of confidence and is ready to take on anybody that challenges him.

Turning the subject over to Blessing Owodibu, he is prepping for the biggest show of his career, the 2021 New York Pro.

Blessing will be making his pro debut at the 2021 New York Pro, and he will definitely have the bodybuilding world keeping their eyes on him.

He has been using his social media on a regular basis promoting this event, and showing his training sessions with fan favorite Kai Greene.

Whatever the result, Blessing will be around for a long time with his entertaining videos and as well displaying a fantastic looking physique.