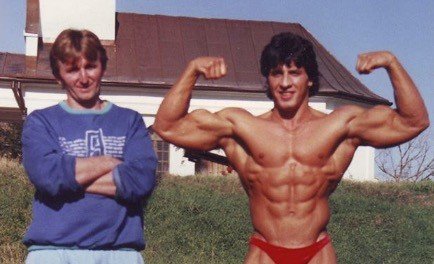 Adam Janković passed away at the age of 67 after battling a long illness.

Milos Sarcev is known to be one of the greatest trainers/coach in the sport of bodybuilding.

It is a very special moment when Milos credits a person such as Adam for all the success in his bodybuilding career and life in general.

Evolutionofbodybuilding.net’s Kevin Grech contacted Milos Sarcev to find out more about his great mentor and trainer immediately after hearing the news about his death.

Adam Janković, was a top Yugoslavian boxer and boxing coach in the beginning of his career.

As time went on, Adam started to get interested in bodybuilding and opened his first gym called Bodybuilding Cub Bečej in Serbia.

Milos describes Adam as a very simple, quite and good man.

Milos went on to say that he is very grateful and blessed to have somebody such as Adam in his life. Adam always supported him and was a guide to Milos when he needed him most.

Adam Janković’s son Sale will continue to run his gym and keep his fathers legacy alive.

Milos said that when he visits Serbia to see family and friends, he always makes it a point to train at Adam’s gym.

Milos considers Bodybuilding Cub Bečej his favorite gym of all time and he also mentioned that the gym still has the same equipment from the 80’s. A true bodybuilders gym.

We, as bodybuilding fans, are used to seeing the final product when it comes to bodybuilding.

When Milos used to walk on stage, he always looked like a work of art, presenting one of the most aesthetic physiques in the history of the sport.

The majority of people fail to realize that behind the finished product, there is always somebody that guided the athlete in the right direction, physically and mentally. Even if the person is not near them physically, a phone call is all the athlete would need. Adam was one of these people.

It is the quiet people like Adam Janković that made bodybuilding and sport in general what it is today.

We at Evolutionofbodybuilding.net send our deepest condolences to Adam’s wife Stana, his son Aleksandar, family and friends.