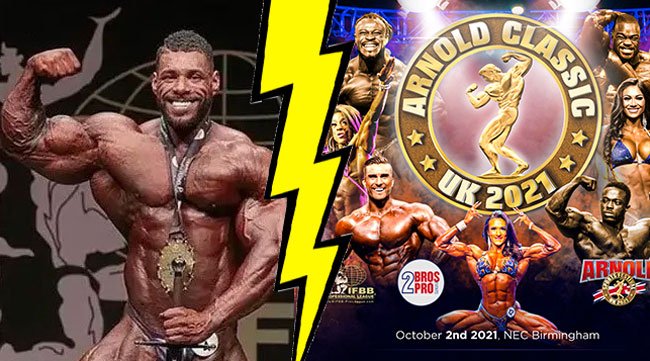 Nathan DeAsha not invited to the Arnold Classic UK.

Nathan DeAsha is one of the UK’s top bodybuilders, winning five shows since turning pro in 2014. Why was he excluded from the Arnold Classic UK?

In the last few months, it was evident that Nathan DeAsha is finally preparing to make a return to the competitive bodybuilding stage.

In Nathan’s last four competitions in 2019, Nathan placed first at the Monsterzym Pro show and second in Hungary, Vancouver and finally at the Yamamoto Cup.

Nathan has five Pro League wins since turning pro in 2014, much more than the majority of top bodybuilders competing today. Nathan consistently places in the top five, making him a threat in any event that he competes in.

In 2020, Nathan decided to take a little break to focus on his very successful gym, Prophecy Performance Centre, in Liverpool. Plus, the Covid-19 lockdown complicated matters, preventing him from competing.

The news of the Arnold Classic UK was a breath of fresh air for NPC/Pro League competitors. Since the split between the NPC and the IFBB in 2017, the Arnold Classic Europe that takes place in Spain, is only open to IFBB Elite Pro athletes.

As with every major bodybuilding and fitness event, all eyes will be on the Bodybuilding Open Class Division.

12 athletes have been invited to the UK edition of the Arnold Classic. With a lineup made up of a number international athletes, one would expect it to be dominated by UK Pro athletes.

Three athletes will be representing the UK, Kuba Cielen, Samson Dauda and Jamie Christian-Johal. One athlete seems to be missing from this list, at that is UK’s top athlete, Nathan DeAsha.

A number of other UK athletes have been left out, but this would be for various valid reasons.

A number of athletes such as James Hollingshead and Flex Lewis were probably considered for this event, but their first priority would be competing at the Olympia Weekend, one week later.

This would be the reason why a number of star athletes are not appearing on the competitors list.

Big Ramy would win the final Arnold Classic Europe that would be organized before the split.

Organizing the Arnold Classic UK just one week before the 2021 Olympia Weekend, has obviously discouraged a number of athletes from traveling to the UK from the USA.

One athlete that was expecting to be invited is Nathan DeAsha. Nathan has been more active on social media, showing his progress pictures and being interviewed on a number of top YouTube shows.

Nathan was not pleased by being excluded, just as the majority of bodybuilding fans vented their frustration on social media.

Some have alleged that Nathan was excluded because of his complications with the law in the past.

If Nathan’s past problems were considered, the NPC/Pro League has a lot of explaining to do. It is on record that a number of other athletes, judges and show promoters have had problems with the law and even spent time in jail. They are all still doing business as usual and a number of these people work very close to NPC/Pro League President Jim Manion.

It was obvious that Nathan was going to be one of the favorites to win the event if he was invited.

Nathan did not hide his opinion and published a short message on his official Instagram page.

“Guys, thanks for sending me the Official Arnold UK lineup. I know I am not in it sadly enough. I do apologize. This is one I am going to fo about smartly and not just jump at it like I would usually do. You will hear mine and my lawyers position very soon!!.

“Not the outcome I ever wanted. This is something based on lies!! Pathetic!!” – Nathan DeAsha

DeAsha also published a video, thanking all the fans for the messages he received of support. Nathan did not hold back from labeling this situation as “bullshit”.

Evolutionofbodybuilding.net has contacted Nathan, he was not happy about the situation, but he has decided not to speak about this matter until he speaks to his lawyers.

The Arnold Classic Organizers, still have not published any reply related to this matter on any of their social media pages dedicated to the Arnold Classic UK. A number of fans have asked for the reason, but no reply was given.

UPDATE (20-6-21 – 20:45 GMT+2): Evolutionofbodybuilding.net sent questions to the Arnold Classic UK organizers. They refused to answer and said to contact 2BrosPro.

2BrosPro viewed the same question sent to them and refused to answer.

Evolutionofbodybuilding.net will continue to follow this story as it develops. 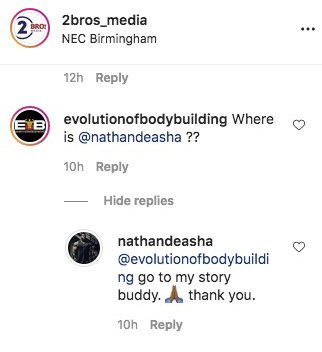 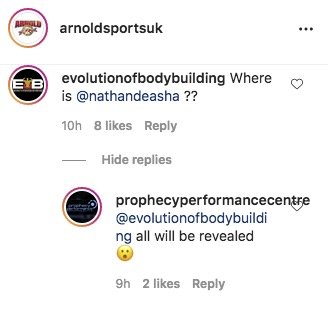 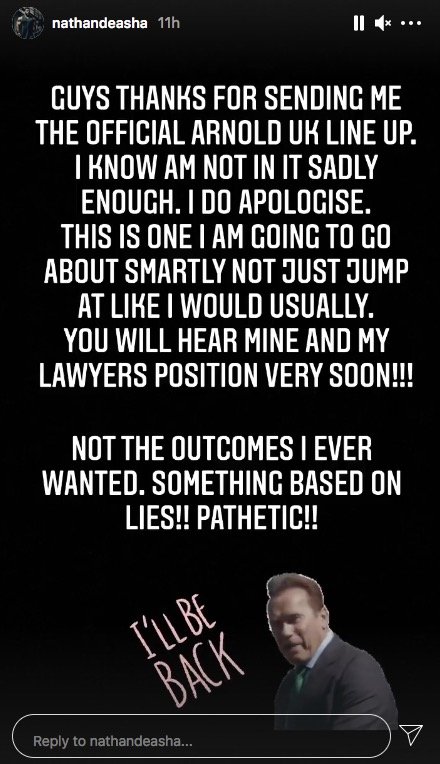