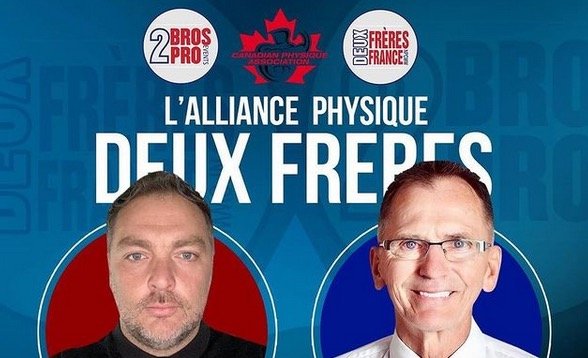 The NPC and Pro League have announced that they will be organizing events in France.

2 Bros Pro‘s Ian Constable and Canadian Physique Alliance‘s Ron Hache have teamed up to promote a number of events in France in 2021.

In a recent press release published on social media, it was announced seven events will be organized, consisting of NPC amateur and Pro League shows.

Ron Hache of the @canadianphysiquealliance and Ian Constable of @2brospro_events are proud to announce a partnership to hold 7 new NPC worldwide/ IFBB pro league shows in France during 2021.
With over 40 years of international show hosting, Ian and Ron are guaranteed to bring something special to the great nation of France.
With a combination of open pro qualifiers and natural pro qualifier shows along with new natural and open regional events scheduled watch this space for new announcements coming very soon.
These event will all be taking place later on in the year to ensure that all athletes have enough time to prepare for this exciting schedule of events.
It’s time french and international athletes were given the opportunity to compete in France with the NPC worldwide and IFBB professional league.
We will be unwavering in our mission to bring these two great federations to the historic country of France.
Stay tuned to @lalliance_physique_2_freres for all event info coming soon.

The bodybuilding scene in France is not without controversy, especially during the 2019 contest season.

The Eric Favre Festival Sport Sante, a Pro League qualifier, was scheduled to take place between 13-14 April, 2019. The show was promoted by Eric Favre.

Less than 24hrs before the event, the athletes received a message informing them that the event was cancelled, without any explanation.

The athletes traveling from all over Europe, who were already on their way to the event were not pleased with the news.

Bodybuilding and fitness coach Cristiano Catoni published a video (video at end of article), expressing his frustration with the situation they were in.

Pro bodybuilder King Kamali also went to his social media to express his frustration on how the athletes were treated.

After a few hours, news emerged that show promoter Eric Favre was arrested that same evening.

20 people including show promoter Eric Favre were arrested on 11 April, 2019 for the distribution of anabolic steroids and money laundering.

Ian and Ron will finally be giving more opportunities to French athletes to progress in the NPC and Pro League with their new events in France.

2020 was a quiet season due to Covid-19 in France. With restrictions easing, this is the best opportunity for the new promoters to ease their way into the French bodybuilding scene.

Athletes will also be given the opportunity to take their first step in competitive bodybuilding with their regional shows.

With the recent success of 2 Bros Pro and the Canadian Physique Alliance, these two promoters will surely organize new and exciting events in 2021.

2020 was a challenging year for all show promoters, but 2 Bros Pro still managed to organize and number of events. Unfortunately, the Canadian Physique Alliance had to cancel all their shows in 2020.

No official show dates have been confirmed, but the events will most probably take place later in the year.

The video on the evening the event in 2019 was cancelled.

King Kamali expressing his frustration that the athletes were denied the opportunity to compete in 2019.