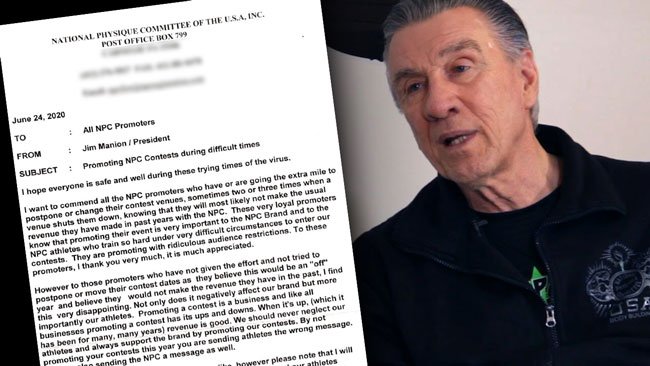 Jim Manion and the NPC have been working very hard during these difficult times due to the Covid-19 crisis.

A large number of events had to be cancelled because of strict government restrictions, while other promoters decided to either postpone their events or move them to another state.

For example, the New York Pro took place in Florida while the Chicago Pro had to be moved to Atlanta. These top events had to be postponed and finally moved due to strict restrictions in New York and Chicago.

A number of promoters could afford to postpone and move events, but the smaller events unfortunately had to be cancelled for 2020.

The promoters that managed to proceed with their events, obviously praised NPC President Jim Manion and other officials for their support.

The same cannot be said for the majority of NPC promoters that had to cancel their events.

Evolutionofbodybuilding.net received a copy of a letter that was sent to all NPC promoters last June 2020. This was a period when government restrictions were in full force in a number of locations.

In the letter, Jim Manion expresses how happy he is with the NPC promoters that did not cancel their events.

Manion expressed a different tone for the promoters that had to cancel their events.

This site has been informed that approximately a dozen promoters are very disappointed with Manion’s reaction after being so loyal to him for many years.

The NPC President criticized the NPC promoters that cancelled their events of putting the NPC brand in a bad light.

“By not promoting your contests this year, you are sending athletes the wrong message. You are also sending the NPC a message as well”, explained Jim Manion.

Manion continued to show his disappointment in his conclusion.

“You can interpret this message anyway you like, however please note that I will remember those promoters who supported the NPC brand and our athletes during these difficult times. I will also remember the promoters who have not. Sanctions are issued on a year to year basis at the discrection of the NPC National office”, concluded Manion.

A number NPC promoters that fall in the category of cancelling their events are feeling threatened and uneasy about the atmosphere within the NPC.

It is ridiculous to say that the promoters are sending a bad message to the athletes. If it was not a safe environment to organize an event, the promoter made the right decision to cancel it.

It is obvious that Jim Manion and the NPC benefit financially from every amateur and pro event that takes place. A sanction fee must be paid to the NPC when an event takes place.

If events are on the decline in return this means less profits for Jim Manion and the NPC.

In 2020, it was evident which promoters are close to the NPC and it’s hierarchy.

Evolutionofbodybuilding.net also has information from close sources within the NPC that some NPC promoters are on the verge of losing their events. It is alleged that the more popular promoters that are Manion’s big money makers are taking over and adding more events to their portfolio.

During such a difficult time, one would believe these promoters would expect to find some encouragement and support from people such as Jim Manion and other NPC officials.

They would expect that Jim Manion gives them the support that is needed after such a horrible year. A number of these promoters suffered heavy financial loses and are very close to never organizing another event.

This is one of the downfalls of having a ‘federation’ run as a business.

The owner is Jim Manion and in the future it will be run by his grandson Tyler Manion.

They do and say what they want as it is their business. All the promoters whether they like it or not, work for them.

If the NPC are not happy with a certain promoter, they are kicked out. No matter how much money they generated in the past.

To have the NPC President slam these promoters in such a difficult time is just ridiculous.

The letter sent to all NPC promoters: 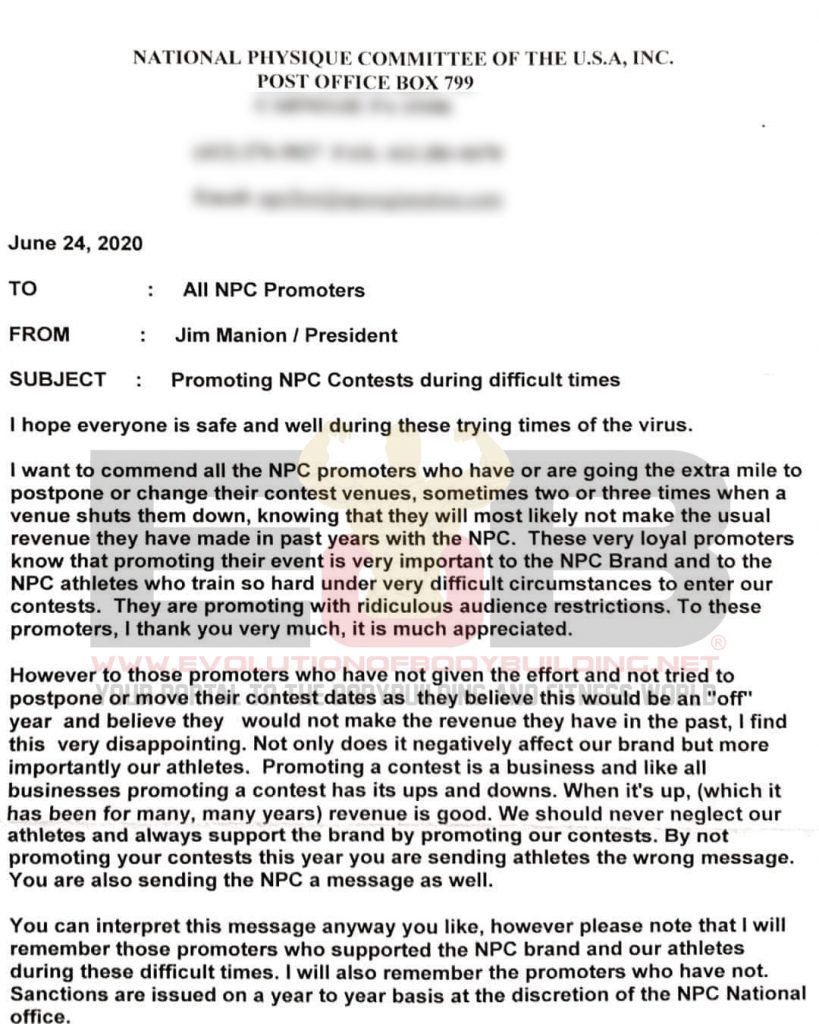