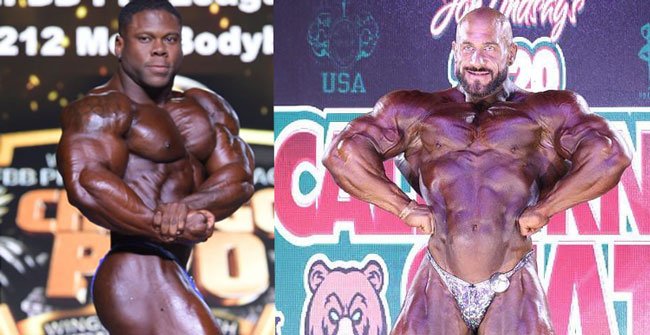 Canadian IFBB Pro Antoine Vaillant was one of the first athletes to step in and stand by his colleague, Keone Pearson.

Keone Pearson has just recently qualified for the 2020 Olympia Weekend after winning the 212 bodybuilding title at the Chicago Pro.

Pearson was instantly one of the favorites to challenge defending champion Kamal Elgargni for the 212 Olympia title.

Just a few days after lifting the Chicago Pro 212 title, Keone Pearson officially announced on his official Instagram page that he will not be competing at the 2020 Olympia Weekend.

Many critics in the bodybuilding world were very harsh with their criticism on Keone’s decision.

Keone explained that the main reasons for his decision was he needed a break.

Keone wants to spend more time with his family and girlfriend. As well, Keone explained that the sport of bodybuilding is very stressful on the body and he needed to take a break.

Being a very young bodybuilder, Keone has many more years of competition ahead of him and he was praised for taking a step back by Antoine Vaillant.

There is no other athlete in the bodybuilding world that can explain what it means to step away from the sport as Antoine Vaillant.

When he was just starting to break into the professional bodybuilding world, Antoine took the wrong path in life and ended up addicted to recreational drugs.

If Antoine continued pushing ahead with his bodybuilding career and his drug habit, he probably would not be with us today.

Antoine realized he had a big problem when his closest friends were dying and signed up to rehab.

The 2013 Toronto Pro would be his last show before entering rehab.

After numerous rehab sessions, Antoine finally walked out clean and with a new challenge for life.

Fast forward to 2020 and Antoine Vaillant is qualified to compete at the 2020 Mr. Olympia.

A few days after Keone’s announcement, Antoine published a very emotional video explaining why Keone made the right decision to step back.

Keone is not in the same situation as Antoine was when he stepped away from the sport, but as Antoine said nobody knows what is happening behind closed doors.

“Live and let live… it’s none of our business” are the words that stood out from Antoine ‘s message to the critics.

Before Antoine goes on to reveal what he went through, he reminded the viewers that bodybuilders are people to.

Bodybuilders have physical and mental problems just like every other person.

Qualifying for the Olympia Weekend is a dream for every bodybuilder, but it is not worth stepping on that stage if it will hurt the athlete physically or mentally.

Keone Pearson has decided what was best for him and his family and if this means taking a step back from the sport of bodybuilding to better himself, it is the right decision.

Keone’s decision should be respected and not questioned.