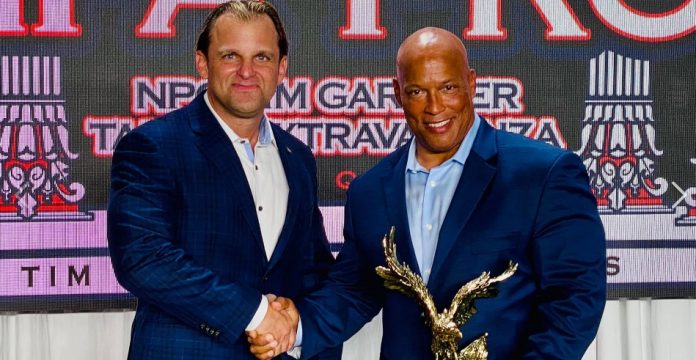 During the 2020 Tampa Pro, a very special award was presented to one of the most popular bodybuilders to ever grace the bodybuilding stage.

Shawn is one of the hardest working people in the bodybuilding industry, traveling all over the world covering events and promoting his own shows.

Sometimes on the controversial side, Shawn does not hold back when it comes to reporting the truth. But this is what makes him such a colorful character.

On a number occasions, Shawn has challenged Evolutionofbodybuilding.net on a number of subjects, but what is special is he listens to the other side of the story.

In 1985, Shawn would dominate the NPC Teen Nationals and win the overall title.

Fast forward to 1987, Shawn Ray would introduce himself to the bodybuilding world by winning the NPC Nationals to earn the coveted IFBB Pro Card.

Shawn would place fourth at his first pro event at the 1990 Night of Champions and place 13th at the Mr. Olympia in the same year. It would be a placing that Shawn learned from and never repeat in his long bodybuilding career.

In 1990, Shawn won the Ironman Pro Invitational and place third at the Mr. Olympia. Moving up ten places at the Mr. Olympia in one year was proof  that Shawn Ray would be one of the favorites to fight for the title.

Shawn won the 1990 Arnold Classic, but unfortunately he was disqualified due to steroid testing.

in 1991, Shawn would win back his Arnold Classic title and place fifth at the Mr. Olympia.

Until his retirement in 2001, Shawn Ray competed in 13 Mr. Olympia competitions, placing in the top five in his 12 appearances on the Olympia stage.

His best placings at the Mr. Olympia was in 1994 and 1996 when he placed second to the much bigger Dorian Yates.

Many believe Shawn should have won the Mr. Olympia at least on one occasion. In 1996, Shawn presented a much more aesthetic and balanced physique compared to Dorian Yates, but the judges preferred to pick size over a well balanced physique.

After stepping away from the bodybuilding stage, Shawn would be involved in numerous projects.

Shawn worked very close to Ben and Joe Weider. Joe believed Shawn had the qualities to be a leader and wanted him to be the voice of the athletes.

Moving between a number of bodybuilding media companies, Shawn worked as a representative and reporter for a number of years.

At the present time, Shawn is the Editor in Chief at Digitalmuscle.com and also Senior Producer for the Olympia, working with President and Chief Olympia Officer Dan Solomon and owner Jake Wood.

Evolutionofbodybuilding.net‘s Kevin Grech would like to congratulate Shawn Ray for this great achievement and look forward to many more years of Shawn’s great work and friendship.