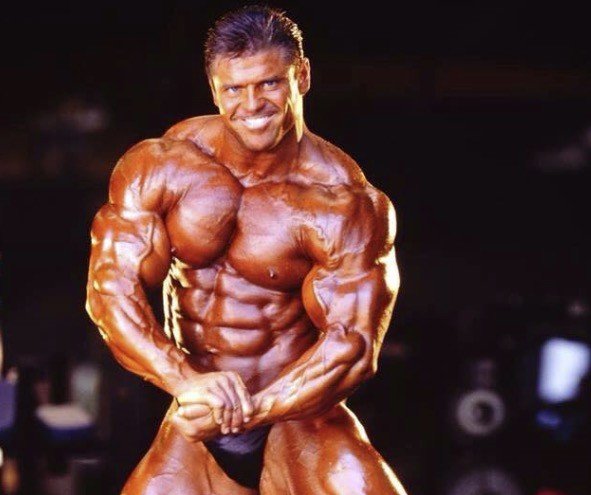 IFBB Pro (or former IFBB Pro) Eddie Robinson took part in a discussion that took place on IFBB Legend Juliette Bergmann’s Facebook on a public post she made.

After a number of congratulations from fans and friends, one of our loyal readers made a comment regarding one of our recent stories: Bob Cicherillo sends message to IFBB Pro’s that have left for other federations.

Mark Bates made a comment comparing the IFBB Pro League to the mafia. 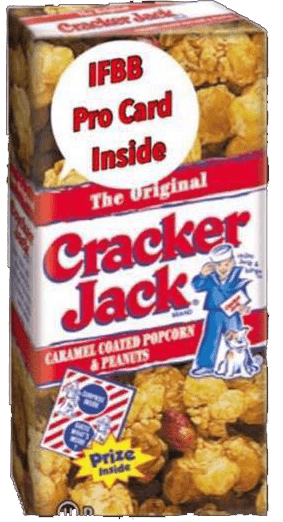 IFBB Pro Eddie Robinson immediately took part in the conversation and vented his frustration regarding the state of bodybuilding within the IFBB Pro League as he has done on a number of occasions in the past.

This time, Eddie was more vocal stating that the IFBB Pro card has become something you can easily get from a Cracker Jack snack as a surprise inside. He continued on saying that in the past maybe two or three athletes would become IFBB Pro’s per year compared to the 300 plus now.

He called the IFBB Pro League a corrupt federation that want more pro’s so they can make more money from the registration fee’s.

Eddie made a valid point when he said that athletes today are deciding to compete in Physique and Classic Physique because competing in the open class has just become ridiculous.

Back to old classic standards! Not place a Bandaid and create new divisions! Looks where that got us! Men’s physique is biggest division, Classic and women’s Bikini. What happed to bodybuilding? Is it because it’s to crazy knowing what it takes these days to get on that IFBB stage? Who wants to look like a Blocky Prego mass monster? What happened the the Zane’s and Labradas? Beautiful balanced physiques that were a work of art? I’m calling for a mandatory Vacuum pose! – Eddie Robinson

Eddie called on Arnold Schwarzenegger, Jim and Bob Lorimer to fix the sport and bring back to the way it was in the past. In his words “Shit can the bad apples”.

Eddie also talked about the letter that Bob Cicherillo published regarding former IFBB Pro athletes using the name IFBB Pro. “As for Bob Chick letter. Once an IFBB pro Always an IFBB pro especially for those who represented the sport, been on over 87 Covers promoting this sport.. IFBB Pro, WBF Pro and IPF 2x World Record Holder, ESPN World Wrestling Champion.. these titles and Pro recognition can’t be taken away. However Bob can take my 12 years worth of worthless IFBB Card and wipe his ass with it!”

Editorial note: Many have asked us at evolutionofbodybuilding.net why are we writing about such arguments and why are we making such stories public. Well, since the split between bother federations, the IFBB Pro League have went on a campaign to throw mud at every other federation and especially the REAL and ORIGINAL IFBB and the new IFBB Elite Pro League. The other federations are working quietly and not even responding, they will give an answer with their product.

Bob Cicherillo and gang are trying to make all the athletes and fans that the NPC and IFBB Pro League is a perfect federation with now defects or problems. They are trying to penetrate other locations such as Europe when they know the IFBB International have a dominant hold on over 196 countries. So they are trying everything to scare competitors in thinking that the Olympia is the only way to go. Yes it is the ultimate competition for the IFBB Pro League, but NABBA have the Universe and IFBB have the World and European Championships for the amateurs and new shows for the IFBB Elite Pro league. Not every bodybuilder or athlete wants to win the Olympia title and we are all getting tired of all this propaganda.

The minute the split occurred or lets say when Jim Manion and the NPC was suspended from IFBB as an affiliate, Bob Cicherillo immediately announced his shows in the UK. This was all planned and now it has become a joke with everybody trying to take advantage of this split financially. Who will gain from all this? the promoters will. The athlete now is confused in what is the right road for them.

Even people who are loyal to the NPC/IFBB Pro League are preaching that supplement companies and other companies  should not advertise on sites/magazines that promote other federations. This is ridiculous as athletes from other federations need products so they are shooting themselves in the foot if they listen to these ridiculous ideas. 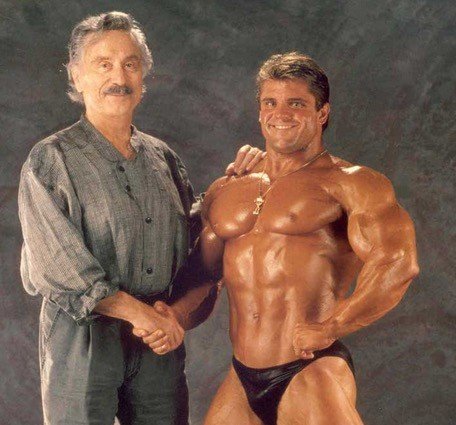 If you are an IFBB athlete, obviously if you are located in Europe, the new IFBB International/IFBB Elite Pro league is the road to take and if you live in the USA, an athlete should stick to the IFBB Pro League/NPC. If you don’t want anything to do with any of these federations, you can also go to NABBA, PCA, NSL or the Global Bodybuilding Association. There are a lot of options available.

Then the two federations should pick their best athletes and make a super competition to see who is the real world champion or lets say Mr. Olympia, but now the Mr. Olympia name is owned by a publishing company (AMI) and not under the Weider family… so it is worthless. A new name should be created.

As now, since a majority of the European athletes will stick to the IFBB International and as well the Trump travel ban is keeping some of the best athletes in the world out of the USA, the Olympia title has lost its worth as not all the best athletes stepped on that stage to compete.

We are going through a negative period in the sport and hopefully all this will pass.

Below is the conversation in full: 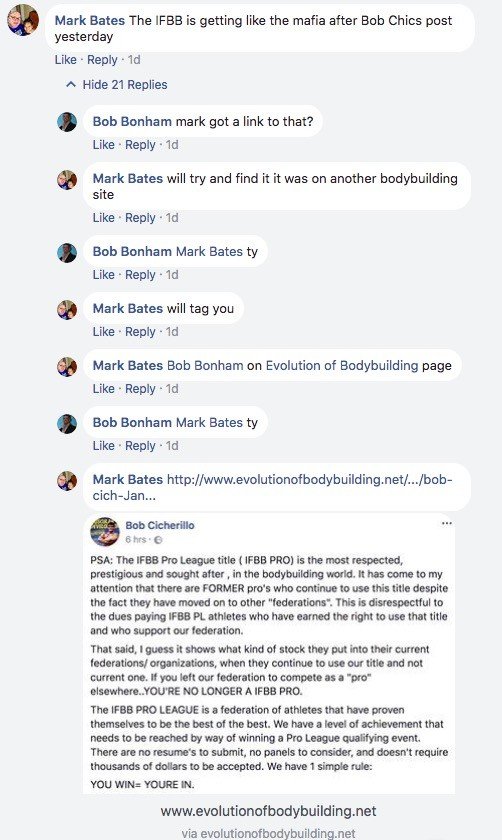 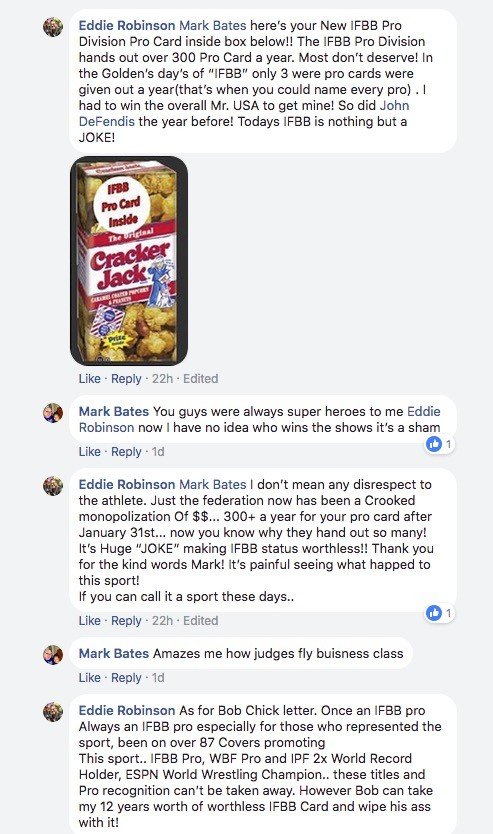 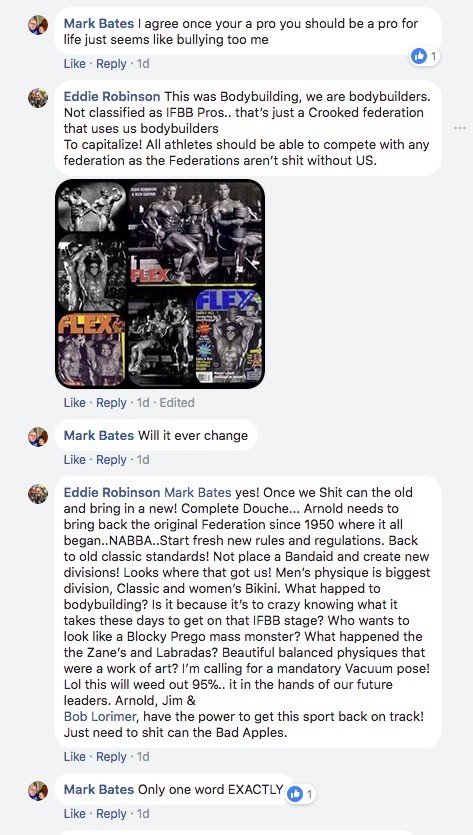 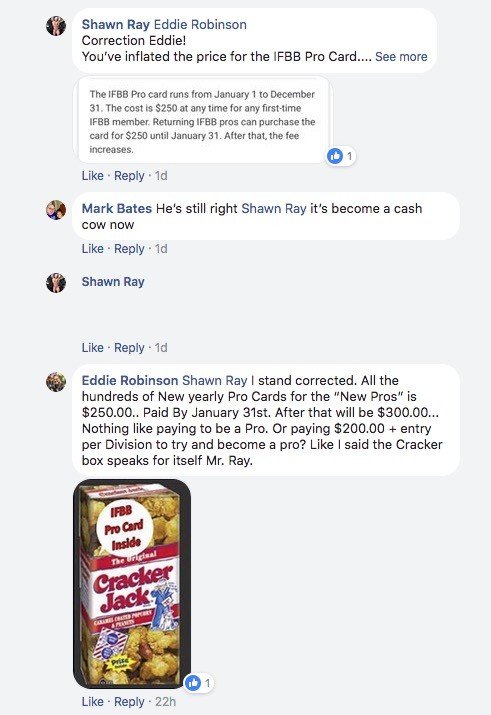