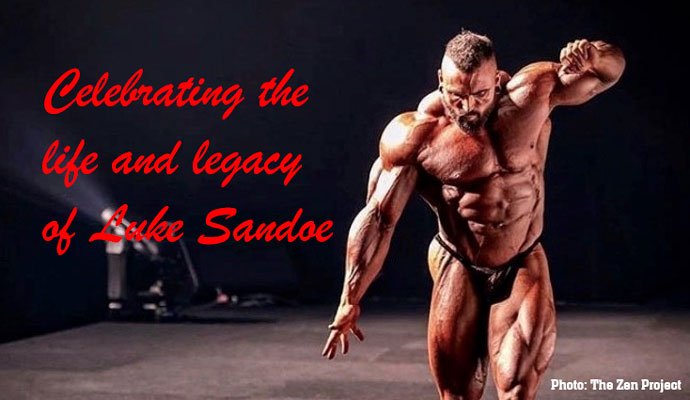 Celebrating the life and legacy of Luke Sandoe one year after his death.

One year ago today, at the young age of 31, the bodybuilding world lost Luke Sandoe. His presence is still felt, thanks to his close friends that make sure he is never forgotten.

It was on 7 May, 2020, the horrible news started to spread across all media that bodybuilding’s favorite rising star, Luke Sandoe passed away.

The cause of Luke’s death was discussed heavily and the exact cause is still a mystery, with many alleging it was due to his mental struggles.

Luke was a friend to everybody in the bodybuilding world, from our experiences with him, he made sure to put a smile on your face with his crazy antics.

Thanks to Fouad Abiad, the young and old can enjoy hundreds of hours of footage from their online podcast, Bodybuilding and Bullocks.

Fouad could have easily cancelled the show after Luke’s death, but thanks to Luke’s close friends, the show continued and Luke’s presence still can be felt in every episode.

Evolutionofbodybuilding.net‘s owner Kevin Grech has conversations with numerous bodybuilding stars thanks to social media. Either by phone, video or event text, contact is made. Some great relationships have been made.

Luke Sandoe was one of the athletes that this website contacted on a regular basis.

From Luke thanking this site for featuring his YouTube videos or just chatting about the craziest subjects, it was always a great moment.

My favorite conversation with Luke

I (Kevin Grech) would like to share two conversations that I cherish deeply, that has absolutely nothing to do with bodybuilding. It was a funny conversation about his pet dog, Wicket and a finny artwork of Luke.

Before Luke published the entire video on his official YouTube page, I had asked Luke to send me a clip of the process he goes through grooming Wicket. (Video at end of article).

Every fan of Luke would know that he cherished his children, Wicket and we cannot forget his comic book collection.

I was always amazed how Wicket would be so calm and obedient when Luke washed and cut his hair.

Compared to my parent’s pet dog ‘Rocky’, who would eat you alive if you dare to touch him near his face. Even at the site of scissors, Rocky would go crazy.

I wanted to show my mother the video that Luke published, and he immediately sent me the best clips to show her.

After trading photo’s and discussing some of the hilarious moments with our pets and other subjects, I realized there is another side to Luke, his life was not just about bodybuilding.

Another funny discussion with Luke was about a photo that he noticed on Google while Fouad was scrolling. It was a cartoon artwork of Luke with glowing eyes. His reaction was priceless. (Video at end of article).

As I started to follow Luke closely on social media and his podcasts, I truly believed Luke was one of the greatest characters in the sport of bodybuilding.

Luke’s legacy will remain with us

Luke is still mentioned in the majority of podcasts that Fouad Abiad produces, and thanks to him, Luke’s life will be remembered forever.

Luke’s best friend Ben Chow, has showed on a number of occasions that he is still feeling Luke’s loss, but thanks to the support of his family and friends, Ben continued to push forward.

Placing third at the Arnold Classic USA and second at the Tampa Pro in 2019, Luke was building a foundation to be one of the best bodybuilders in the world.

Luke was predicted to possibly be Mr. Olympia in the near future. He had a huge presence on stage and the fans loved him.

There is still a huge void in the sport with the loss of Luke and we will probably never witness anybody like Luke again.

Just two days before his death, Luke published a video of probably his last ever workout.

So much mystery surrounds this clip, with his back towards the camera, leaving us to think of “What could have been”…