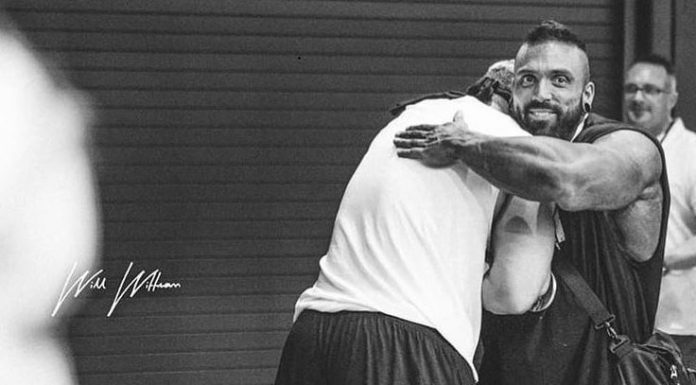 Luke Sandoe’s best friend reveals what led to his death.

This past week has been a very dark one for every bodybuilding fan.

The news about the death of fan favorite Luke Sandoe, literally brought the bodybuilding and fitness world to its knees.

It has been two days since the news spread like wildfire all over the internet and social media.

Many are still trying to figure out what happened, with speculation about how he passed coming from everywhere.

Ridiculous comments on social media about how Luke died are to be expected from the few people that have no respect at all for a persons family.

We all know what the first thing many associate his death with when it comes to bodybuilding, but in Luke’s case this is far from the truth.

In an emotional video on his Instagram page, Luke’s best friend and colleague at Redcon1, Ben Chow, explained what basically led to Luke’s death at the early age of 30.

Ben Chow explains in detail what Luke had to face everyday of his life. This is something everybody can go through at some point in their life.

Even the biggest and baddest people in the world have a that moment in their life that is difficult to get through.

“What happened with Luke was his choice, He decided that it was his only option and we’ll never comprehend what he was struggling with. I will say that in my time knowing Luke, he has battled with demons which dates back from long before bodybuilding and long before I met him“, Ben revealed.

Ben might be feeling responsible by not helping enough, but this is something Ben has no fault with.

As the bodybuilding world is coming together to help Luke’s children and family, we must also reach out to the people that were close to him as well.

To mention a few names such as Ben Chow, Aaron Singerman and Fouad Abiad. These are just a few of the people that knew Luke better than all of us.

We must remember Luke for what he was, a guy that people looked up to, made everybody laugh and just a great person to be around with.

Luke might not have grasped what a great influence he had on the thousands of fans all over the world.

The thousands of posts and messages all over the internet and social media in the last few days is proof of how much love there is for Luke and his family.

Thanks social media, Luke will be with us forever. If we ever miss his voice or jokes, there are a few places we can go cherish his memories.

First of all, there is Luke’s official Youtube and Instagram page, you can watch everything from training, joking around and as well the numerous videos with his dog Wicket.

There are more that 40 two hour episodes on Fouad Abiad’s official Youtube page to watch.

Redcon1 also has numerous videos of Luke as well.

Luke may be gone physically, but his memory will remain with us forever.

Ben Chow wrote some beautiful words that reveals their great friendship and what they went through together:

I am so proud of you
@lukesandoe –
We struggled.
We doubted.
We succeeded.
We doubted some more.
You believed in me more than you did yourself.
We laughed.
We argued (well mostly I argued and you gave up)
We cried.
We ate.
We got fucked up.
We watched our own Movie play out in front of our eyes.
We travelled the world.
Dreams were made.
Nightmares are lived.
Those demons can’t hurt you anymore my brother. – Ben Chow

I don’t know if this was the right thing to do. I’m a little lost right now but something told me to protect his memory but honestly. I’m sorry if this wasn’t appropriate. I love you @lukesandoe

Here are some videos to keep Luke in our memory and remember the great times:

Luke’s final episode of Bodybuilding and Bollocks with Fouad Abiad and his best friend Ben Chow.

I’ve recorded this several times and it will never justify what that man means to me. I love you Luke x