Chris Aceto went to his official Instagram account to shed more light on the situation regarding Guy Cisternino.

Guy pulled out from the 2017 New York Pro because of a serious medical situation.

Read More: What happened to Guy Cisternino at the 2017 New York Pro?

After the show, close friends of Guy explained in the best way possible what the situation was.

Guy Cisternino explained in more detail on his social media what the problem was, but he is still waiting for the test results.

Chris Aceto on Thursday, explained what Guy went through until he ended up in the hospital.

This is what Chris Aceto had to say:

We hope Guy gets through this and can’t wait to see him back on stage!! 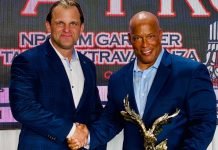