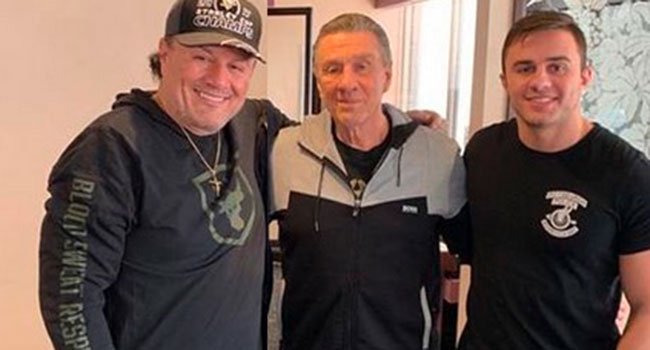 Disturbing allegations against the Manion family and the NPC/Pro League.

In a recent interview with Lee Priest, serious allegations have emerged against Jim Manion’s family and the NPC/Pro League.

The show Leo and Longevity has just recently had Lee Priest as a guest. The title of the video that has been uploaded to YouTube is THE END OF SHAWN RAY – The Manion Mafia & Mandus + Phil Heath + Bob Chick.

The show was dedicated to tarnish the image of Shawn Ray, Bob Cicherillo and even Phil Heath.

The subject of racism was brought up in relation to the controversial incident that took place when Lee Priest put on a black mask. While Lee Priest was wearing the mask, he started to imitate Shawn Ray.

Shawn Ray was not happy about this incident and called Lee Priest out on his social media.

It was evident, the host of the show Leo Rex and his guest Lee Priest do not like Shawn Ray or Bob Cicherillo. All throughout the show, Leo made it a point to call out Shawn Ray and Bob Cicherillo to continue tarnishing their image.

Regardless of what Lee Priest and Leo Rex believe, Shawn Ray and Bob Cicherillo are both the hardest workers in the industry. Their vast knowledge of the history of the sport is second to none and their experience for large events is also unmatched.

Getting to the most important and controversial part of the interview is the moment when the subject turns towards Jim Manion, his family and the NPC/Pro League.

Lee Priest and Leo Rex state some very controversial and disturbing points during the discussion.

Leo continued to associate Shawn and Bob as being a part of the problem, but in reality, they are not associated with any of these allegations.

The allegations by Lee Priest and Leo Rex

• Leo Rex refers to the Manion family as mafia or the ‘Manion Mob’ because they were not voted into their position and he alleges they run their business like the mafia.

• Lee Priest alleges that athletes guest pose for free at Jim Manion’s Pittsburgh Pro. The athletes believe if they make Jim Manion happy, they have a better chance for a callout at the Mr. Olympia, or even a chance for a better placing.

• Lee Priest alleges that Female athletes were forced into signing contracts with JM Manion, if they refused, their career would basically be over. One example that Lee stated was Monica Brant winning the Fitness Olympia title in 1998. He went on to explain that Monica refused to sign a contract with JM Manion and she never won another contest again with the NPC/Pro League. Another example was 8X Fitness Olympia winner Adela Garcia. Lee stated that she would be in tears after talking to JM Manion because if she did not sign his contract, she would never get a high placing again.

• Lee Priest believes that if all the athletes pay for a yearly membership, they should have the right to vote for who should be president of the NPC/Pro League.

• Lee Priest alleges that while Jim Manion is the President of the NPC/Pro League, his son JM Manion gets a commission from female athletes that are under contract with him. The earnings would come from contest placings and guest posing appearances.

• Leo Rex brings up the subject of Mandus Buckle and all the assault accusations against him from female athletes. Leo alleges that the Manion’s know about this problem, but they still did not remove Mandus as an associate to the NPC/Pro League.

The allegations stated above are very serious and the people that run the NPC/Pro League should take note and investigate the matter… But who will investigate them?
Watch the video below:

The video below starts at the part where the allegations start to take place.