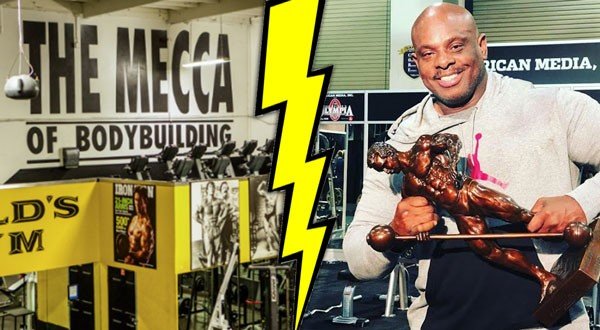 In a two part interview by Xavier Wills on his popular Youtube Channel ‘Desktop Bodybuilding‘, Chris ‘Psycho’ Lewis reveals the real reason he was kicked out of Gold’s Gym Venice.

The former trainer and the mind behind Shawn Rhoden’s 2018 Mr. Olympia victory, Chris ‘Psycho’ Lewis was literally kicked out of Gold’s Gym Venice, even though he is such a successful trainer.

Chris has been away from social media for almost a year and now he feels it is the right time to reveal the truth about the story between him, Charles Glass and Gold’s gym.

Chris discusses his start as a competitor and then moving on to becoming one of the best personal trainers.

Chris explained that he was never an assistant to Charles Glass, but he used to work with him, helping out with clients.

According to Chris, when he started to do his own thing, with his own clients, Charles was not to happy with this situation.

Chris also revealed that the reason he was kicked out of Gold’s Gym was because Shawn Rhoden won the 2018 Mr. Olympia.

“No one can take my clients,
I’m Charles Glass”

Before taking on the big champions, Chris used to refuse them all, because of Charles Glass and as well he admitted that he was afraid to take on such a big responsibility.

After refusing all these top stars such as Dexter Jackson, Shawn Rhoden and countless others, Charles Glass still confronted Chris and told him “No one can take my clients,
I’m Charles Glass”.

When Chris heard those word, he said that that was the push he needed to train whoever he likes.

The moment it was known Chris ‘Psycho’ Lewis was available, a number of high profile athletes left Charles Glass to train with Chris.

Chris took over Shawn Rhoden’s training for just over two years. From the time he had a broken jaw to winning the Mr. Olympia.

In 12 weeks, Chris manage to get Shawn Rhoden fifth place at the 2017 Mr. Olympia.

Chris and Shawn made a plan to put in a year of training and go for the 2018 title, and they succeeded.

Chris went on to explain, after the victory at the 2018 Mr. Olympia, he was not welcomed with praise.

Shawn Rhoden was the first man to bring the Olympia title to Venice since Arnold Schwarzenegger.

After coming back from a promotional trip with Chris Aceto and Shawn Rhoden, Chris explains that he arrived to find out he was kicked out of Gold’s Gym for life.

Watch both videos to get the full story!!