In a recent press release published on the official Facebook page of the NPC Tampa Bay Classic, the promoter confirmed that they will not be promoting or producing the show in 2019.

John G. Schleicher has been promoting and producing this show since 1983. For 36 years, John’s family and friends worked very hard to make this one of the best NPC shows on the calendar.

John explained that the reason was “the current direction and procedures that have been recently adopted by the new Florida State NPC team are not compatible with the goals and standards of the Tampa Bay Classic.”

What was said between John and the Florida State NPC team is not known, but it surely did not go down well with John.

My family and I no longer wish to associate with the caliber of individuals who seek to shake your hand in sincerity whilst stabbing you in the back with their other hand. – John G. Schleicher

Schleicher went on to say that it was not a easy decision to make, but the fact that he cannot run his own show was one of the main reasons he ended his collaboration with the NPC.

It seems all the money John and his team put into the show to design the best stage, create one of a kind trophies and invest in a website to make registration very simple does not satisfy the Florida State NPC.

Another interesting fact is that John received a letter from NPC President Jim Manion in 2017 thanking him for all the years of service and as well producing such a great show.

Removing one of the best show promoters and producers like John and his family is not the way to run a federation.

With all the movements of the NPC to try to promote their brand on the international scene, it makes no sense to disrespect those that have been loyal to them in the USA.

It makes no sense to bring down a castle to build another!!

Below is the official press release in full:

To All Our Former Champions, Competitors, Supporters, Sponsors and Patrons of the Tampa Bay Classic,

It is with sincere and heartfelt regret that I John G. Schleicher, my family, and my loyal staff will no longer be able to produce and promote the NPC Tampa Bay Classic. This decision has not come easy, but after due consideration and evaluation, we have determined that the current direction and procedures that have been recently adopted by the new Florida State NPC team are not compatible with the goals and standards of the Tampa Bay Classic.
For 36 years now, we have strived to produce the highest caliber, finest quality, and best presentation for bodybuilding, figure, bikini and physique athletes throughout the state. The Tampa Bay Classic served as the second oldest contest in the state of Florida. Mr. Peter Potter’s Southern States is the first and oldest NPC contest in Florida, and will continue to be as such. Since the very beginning and throughout all the years, the Tampa Bay Classic has always lived by the standard of putting the competitor first. We have always gone above and beyond to have the best organized and well-run show that we could provide. We have always showcased the competitor on beautiful and cutting edge stage sets and presented them all with fantastic custom made trophies, medallions and various awards. It has been our privilege and pleasure to meet and showcase these fine athletes throughout these many years.
Unfortunately, due to the new rules and regulations governed by the current Florida NPC leadership, especially within our own Central District, we have been directly informed that we can no longer run our own show and production as we see fit. For over 15 years, my sons, with support of key staff members have expedited and ran the entire production for both the pre-judging during the day, and the evening finals. This apparently is no longer allowed and the NPC Florida leadership has informed us that they will have to run the expediting entirely. My staff will no longer be allowed backstage or involved in the expediting of the production at any point during the show. When asked if we could finally become a national qualifier to better serve and attract more and more talented athletes, we were denied without hesitation. The reason given being that we lacked the ability and experience to handle this. We had been told that if we cleaned up our act and changed enough in favor of these new edicts, that maybe we could then have a chance to be a national qualifier in 2020. The sheer lack of respect and insolence towards me, my family, and my staff truly breaks my heart and leaves me discouraged and rather outraged. My family and I no longer wish to associate with the caliber of individuals who seek to shake your hand in sincerity whilst stabbing you in the back with their other hand.
We have always, since the very beginning in 1983 when Mr. Peter Potter asked me to envision and create a show in the Tampa Bay area, strived to follow all NPC rules and regulations. Over the years, we have adapted, refined, updated and improved whatever necessary to serve the best interest of the NPC and of course the athletes themselves. We have invested tens of thousands to update the stage set, create new and one of a kind trophies that stand above most, and we designed and developed a website that would allow athletes and patrons to register and purchase tickets with ease, convenience and security. Despite all we have done for the organization and athletes, our efforts do not satisfy and align with the standards and expectations of the new Florida NPC. Whether these ideals are supported by the NPC President or not remain unknown. However, attached to the body of this rather lengthy letter are pictures of the awards of service and gratitude, along with a personal signed letter from the President himself thanking me for all the years of service as “an outstanding promoter.” I and my family are truly at a loss.
On a more positive note, there are several individuals that I would like to personally thank and recognize as lifetime supporters and advocates of the Tampa Bay Classic. These esteems individuals are: Peter Potter, Pete Fancher, and Deke Warner. Peter Potter has been my friend since 1975 and judged me on the stage, advised and guided me as a promoter, and was one of the reasons I joined the NPC in 1982. Peter Potter was someone who shared my love for the sport and the love of the competitors, which gave us a common bond we continue to share to this day. I will never forget his friendship, support and guidance over the forty plus years. Pete Fancher, former Central Florida Chairman, is and always will be my good friend. He was always supportive of the Tampa Bay Classic for thirty plus years and always advised me in matters that served the competitor well and the best interest of Tampa Bay Classic with the NPC. Deke Warner, who is also my good friend, I had the privilege of judging as he climbed up the ladder of success in bodybuilding. His support of the Classic and my family will never be forgotten. Lastly and certainly not least is my dear friend Naz Agemy. For a great many years, Naz and his wife Patty have been key financial supporters and true advocates of the Tampa Bay Classic. I wish him, his entire family, and his devoted Discount Nutrition team the very best in health and success.
I wish all past Tampa Bay Classic competitors good luck in the future and as I told each and everyone at the competitors meeting before the show – “Today you are a Champion”!

• The NPC has taken control over the running/expediting of shows and mine is no exception. Not being able to produce, direct and run the Tampa Bay Classic leaves me to rely on other promoters/expediters of which I have no control and therefore no ability to guarantee the quality of a John Schleicher promoted Tampa Bay Classic. If I cannot control the quality and organizational flow of the show, then I no longer can answer for the production and results given. Having to pay for expediters will take away funds from my sponsors, which goes directly to having the best trophies and production showcase for my competitors.

Below is the official letter from Jim Manion congratulating John in 2017 and other awards: 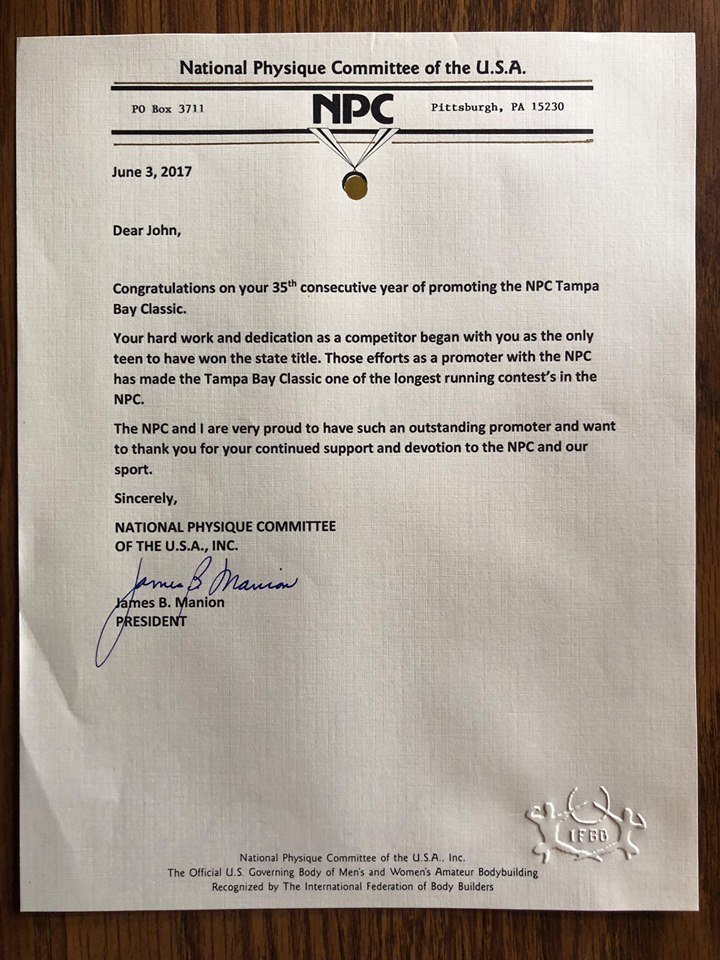 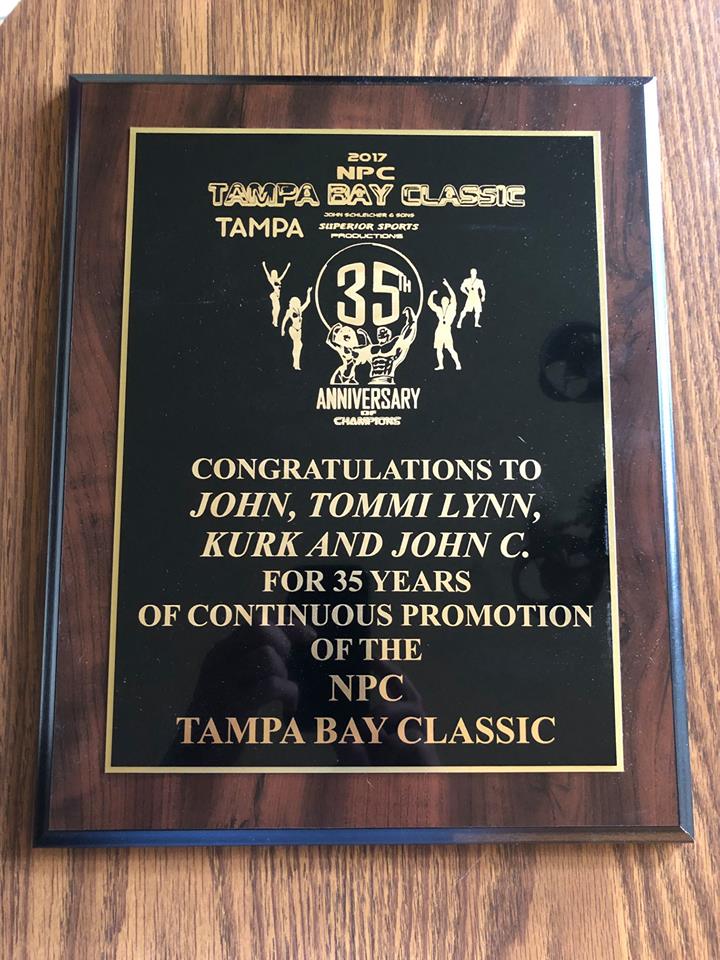 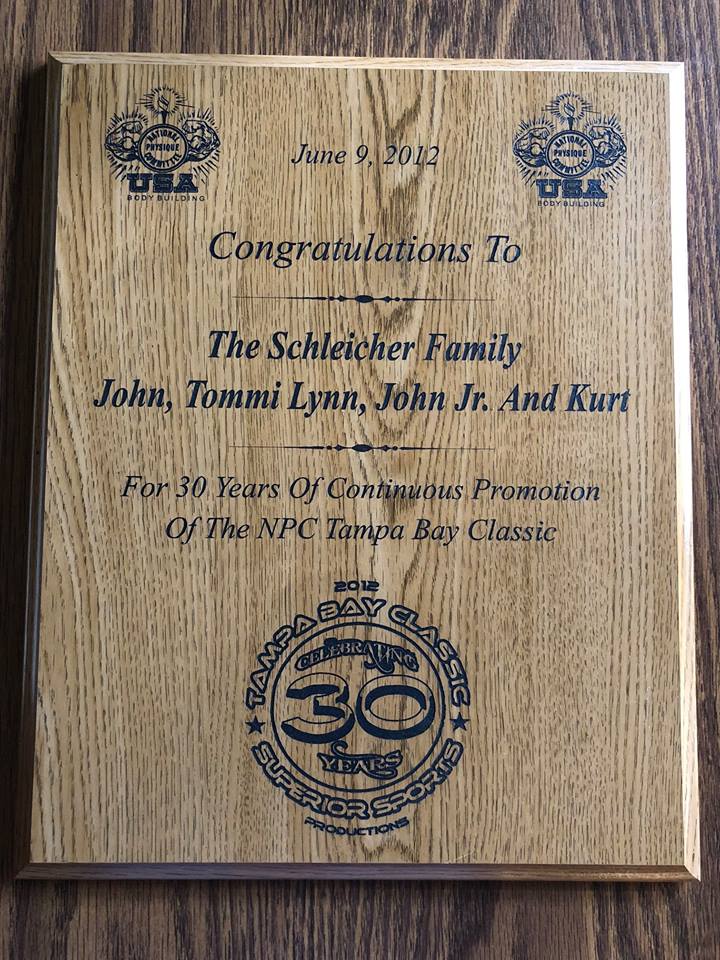 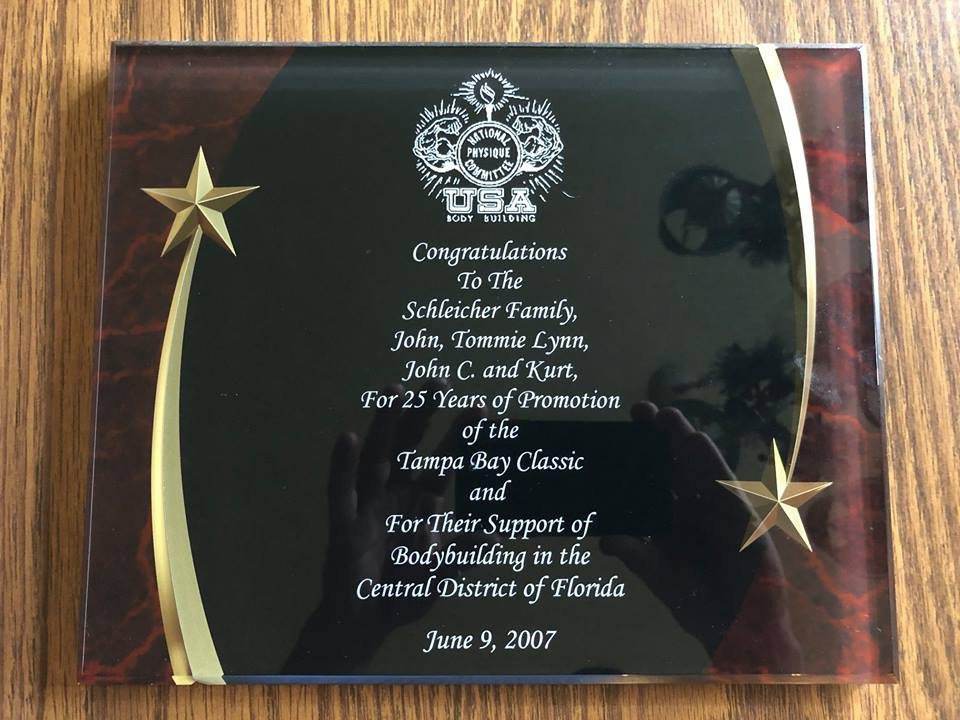