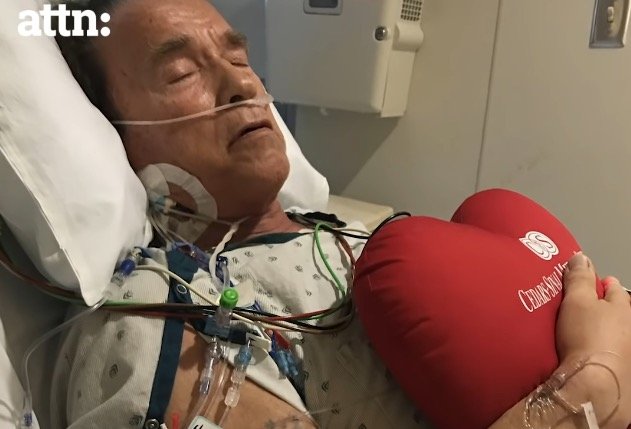 Overcoming Obstacles: “I could have died” – Arnold Schwarzenegger.

In his latest live video via Snapchat, Arnold Schwarzenegger talks about overcoming obstacles in life when giving his Commencement Speech for the Class of 2020.

Arnold uses his major heart surgery that he had to have back in April 2018 as an example for his speech.

Now, for the first time since his heart surgery, Schwarzenegger has decided to open up. Speaking recently to graduates who have had their graduations altered due to the current global health crisis, he explained that this will be far from the biggest obstacle they will face in life. Regardless, it is important to push through, just like he did when he almost died.

It is the first time since his surgery that Arnold goes into detail about the ordeal he went through.

“Let me tell you a brief story about the biggest obstacle that I faced just two years ago, literally four months before shooting Terminator 6: Dark Fate. I got a physical. I went to the doctor, he checked me out. That’s what you do before you start a movie. The doctor says ‘You’re in great health, but I would recommend that you go and replace your heart valve. It’s leaking blood.’

So I said ‘Well I’m not going to have open heart surgery now, four months before shooting Terminator. Are you crazy?’”

“When I woke up from the surgery, I woke up 16 hours later, instead of 4 hours. There was a tube sticking out of my mouth, and then the doctor moved forward and ripped the tube out of my mouth. I was coughing violently, and he says ‘Just keep coughing and then let us tell you what happened.’

They told me that they had to do an emergency surgery, that something went wrong during this kind of noninvasive procedure, then it became very invasive. They said they broke through the heart wall, and there was internal bleeding and I could have died if they didn’t open up my sternum and do open heart surgery. So imagine: the day before I was in the hospital, I was training really hard for Terminator 6, and now all of sudden they’re telling me that they saved my life.

“Then he goes on and says ‘You’re not out of the woods yet. There’s a lot of danger, there’s still patients in our heart unit here that, after surgery, they pass away and die, not because of the heart surgery, but because of the lungs. They get pneumonia. So we are really worried about you getting pneumonia.’”

“Now the reason I’m telling you this is because, no matter how successful you are, life will throw obstacles in your path. Like with my heart surgery, or like with your graduation now. But if you have a very clear vision of exactly what you want to do and who you want to be, you can find a way around all of these obstacles.”- Arnold Schwarzenegger

With all this behind him, we at Evolutionofbodybuilding.net are thankful to still have Arnold with us in good health.