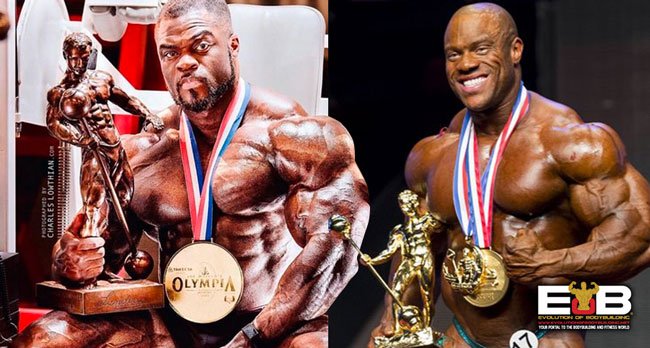 The bodybuilding world has been buzzing with the news of Phil Heath making a return to the Mr. Olympia stage after a two year absence and Brandon Curry’s reaction.

“Unfinished Business” is what Phil is calling his return as his goal is to lift his eight Mr. Olympia title, matching Lee Haney and Ronnie Coleman’s record.

Read More: Phil Heath explains why he has “”Unfinished Business”

As the marketing for the 2020 Olympia looks to now be revolving around Phil Heath and his chance to win his eighth Mr. Olympia title, many are curious about what Brandon Curry thinks about this.

Many believe that Brandon is not happy with the current change of events, but this is far from the truth.

In a recent interview with Fouad Abiad, Brandon Curry talks about his life, being Mr. Olympia, Phil Heath’s return and life after bodybuilding.

This interview with Brandon is probably the best one produced in recent times.

Fouad asks the right questions that Brandon has no problem answering without any controversy.

The interview reveals how intelligent and humble Brandon is and it also reveals the great respect he has for his fellow competitors.

Brandon Curry probably has had the most difficult campaigns of being Mr. Olympia in the history of the sport.

Brandon is the Covid-19 Mr. Olympia. As previous Mr. Olympia champions had the opportunity to make vast amounts of money during their reign, especially in their first year, Brandon did not.

The Covid-19 crisis has forced Brandon to cancel the majority of his guest appearances, guest posing and business opportunities, but he is still happy.

Brandon has stepped up to this challenge and he has now put everything to the side and is focusing on winning his second Mr. Olympia title.

In the beginning of the interview, Brandon talks about how he has done numerous talks at schools and children’s sport tournaments.

Promoting the sport during such a difficult time is not a easy task, but Brandon is doing it perfectly.

Taking nothing away from Phil Heath, the 7X Mr. Olympia champion has toured the world also being a great ambassador of the sport. Phil has contributed to numerous charities and other great projects.

But 2020 is the year of Brandon Curry and he is the reigning champion.

Brandon is not disappointed or worried about Phil Heath’s return, in fact he is very happy to have the opportunity to step in stage next to him.

The marketing campaign of the 2020 Mr. Olympia seems to now focus on Phil Heath winning his eighth title rather than Brandon defending his title.

Brandon understands the business of the sport and he explained it perfectly.

“I’ve been in this sport a long time, so I understand marketing. You can’t market a seven-time Mr. Olympia and not mention the possibility of getting eight. You gotta go with that marketing strategy, and that anticipation for him tying the record. That makes it exciting. That’s no disrespect for me there, that just makes sense. My job is make you forget about that whole campaign.” – Brandon Curry

As the bodybuilding world is talking about Phil Heath, Brandon is going to make sure that we forget about that campaign.

Brandon’s trainer, Abdullah believes that Brandon can defeat Phil due to a number of factors.

William Bonac, Hadi Choopan, Dexter Jackson and Flex Lewis are some of the athletes that also can actually dethrone Brandon Curry.

Brandon does say that even though he is the best bodybuilder in the world at the moment, he still feels that he is a underdog to Phil Heath until he defeats him in December.

The build up to the 2020 Olympia Weekend is already starting to gain momentum, Brandon is looking forward to the best athletes to qualify for the Mr. Olympia and challenge him for the title.

During the interview, Brandon also talks about his diet and his new gym, Carbon Culture.

Checkout the interview below let us know on our social media pages (Facebook, Instagram) what you think of the big battle between Brandon Curry and Phil Heath.

Get your 2020 Olympia tickets now – Log on to https://mrolympia.com/

This happened a few hours after i stepped off the plane the day I got back from winning the 2019 Mr. Olympia @mrolympiallc title. I went straight to the practice field from the airport even though i was tired because i couldn’t wait for the show to happen just so i could be able to see my sons ball! My sons wanted me to bring my trophy to take a pic with their teams and it turned into this instead…glad my wife had her camera out so we can remember this moment. It was special to me. Can’t wait for the pandemic to pass so that i can get back to doing more of this. #15 #mrolympia @mrolympiallc @wingsofstrength @jake_wood_wos @dansolomon_official @bleaver808

Here is why I felt like I had #UnfinishedBusiness and announced my return to @MrOlympiaLLC. If you guys are facing big pivots in your lives, careers, or relationships right now, I really encourage you to break everything down, and go after understanding the “why” before you build back up or head in a new direction. Remember that when committing to self exploration, you will be forced to exhibit such vulnerability that you may feel uncomfortable, just like a dreaded leg day perhaps haha. What’s great about discomfort is that you have now opened your mind, body and spirit to push through boundaries, dropping off dead weight so you can achieve your goals. I have applied this in my life and it has allowed me a new path in creating what I hope are triumphant moments on and off the stage. We’re doing this together, let’s go…