Phil Heath, the 7X Mr. Olympia looked to be unstoppable in winning his eight title.

Phil was surely on his way to win more than eight Olympia titles, until injury sidelined him.

It was already evident in 2017 that Phil was dealing with a problem, but not much was revealed.

Between 2017 and 2018, it was reported that Phil Heath had a small operation to repair some damage in his abdominal area, but it seems the entire problem was not solved.

In the meantime, Phil Heath was being criticized that he was full of himself and cocky. The powers that run the Pro League and the Olympia seemed to have given others preference in the build-up to the 2018 Olympia Weekend.

It all looked like the world was against the champion. It should of been an opportunity to maybe see the third person to win eight Olympia titles, not break him down.

Well, the outcome was what many wanted and Phil Heath was dethroned by Shawn Rhoden. It seemed many believed this would be a new era… but fast forward to May 2019 and the bodybuilding world wants Phil Heath back.

Was Phil Heath like the Iceman, well yes, sometimes, his focus was just on defending his title.

A full abdominal tear and two re-torn hernias is not a joke and this could of killed the 7X Mr. Olympia champion.

But Phil Heath did not give up and he kept putting his body through hell.

This is what a champion is made of and this is what Phil Heath should be respected for.

Even when Phil Heath was defeated, President Jim Manion did not spend more than 15 seconds to present him with his award. To us at Evolutionofbodybuilding.net, this is truly a sign of no respect for somebody that brought so much to the sport.

As Shurie mentioned, Phil was criticized for not releasing any training footage in the build up to the Olympia, but the training sessions were so dark and uncomfortable, who would want to see an athlete go through so much pain. Some things need to stay private.

Again, fast forward to May 2019, just eight months later, and just four months before the 2019 Mr. Olympia, Shawn Rhoden shows up like a person that has never trained to Jim Manion’s Pittsburgh Pro show to guest pose.

Will Shawn Rhoden make a magical transformation to defend his title? Maybe, but he better get working.

In the meantime, Phil Heath is on the mend, and he is still the favorite to win his title back, when he comes back. Regardless who is on the Mr. Olympia stage today, Phil Heath still has the ideal physique.

When Phil Heath feels he is physically ready to come back, the present champion will have to work very hard to hopefully keep that title.

At the 2018 Mr. Olympia, Phil Heath was not lacking in conditioning, he was in perfect shape and won many of the poses, regardless what Rhoden thinks. The judges literally gave the title to Rhoden for being in better condition in the abdominal area.

Rhoden literally took advantage of a injury that Heath was nursing.

At the end of it all, Phil Heath did not quit. He had every valid excuse to, but he didn’t.

Obviously, any defending champion and especially after holding a title for seven years, will not be in the mood to express his feelings on the defeat. But a few days later, Phil did open up on a number of media outlets.

Shurie Heath’s post in full:
#fbf Wednesday morning before the 2018 Olympia. This is what 💀 looks like. This is Zero sleep, very little water and a lot of food to consume with a full abdominal tear and two retorn hernias. I’ve never once heard Phil complain! Phil never once made an excuse. He trained in agony during the after hours at @armbrustprogym. I never asked him once if he was going to be ok bc I already knew he was. When you are the spouse to a savage champion you don’t break their stride or focus by speaking of weakness. I would be on the stepmill and in the leg room hearing him yell in anger and pain just to finish his sets. Never once did he miss one rep or set. A lot of people complain they never got to see Phil train while he was deep into his prep. The reason is…he was too raw and too dark for anyone to see. He had to become an angry demon just to fight through some of the most painful moments in his prep. What is a Champion mindset? What does it take? You have to be one bad ass mutherFCKR to go into such a dark place, blocking out all the pain and adversity. You can’t make excuses or show weakness! You can’t make excuses, not once in 7 years has Phil made once excuse as Mr.Olympia. Some call that cocky and arrogant… I call it necessary!!! Who is inspired by a weak champion? NO ONE! 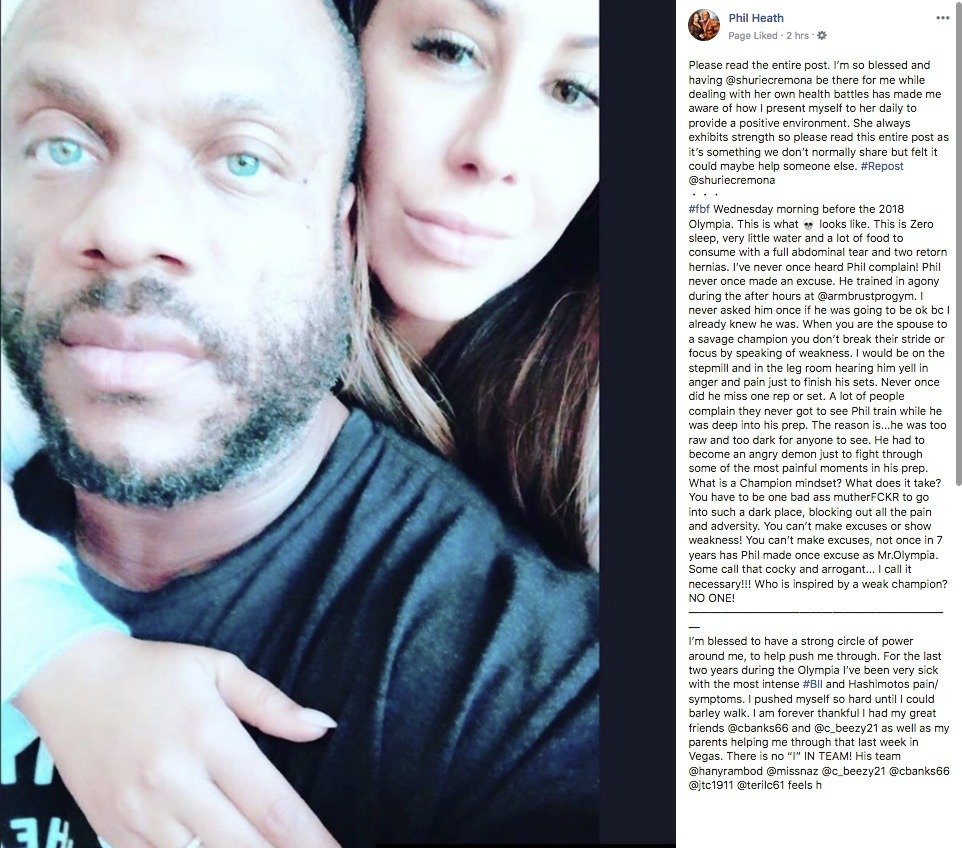