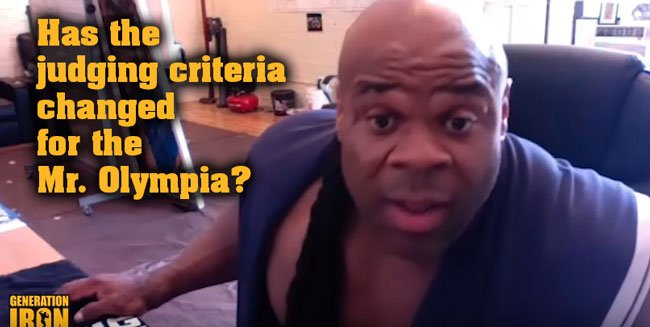 A number of fans immediately reacted by saying they did not understand what Kai Greene was saying.

At first, Kai’s answer is hard to understand, but if you listen to it again, he brings up a valid point.

After his usual philosophical explanation, Kai starts to make sense when he brings up the subject of judging criteria.

He goes all the way back to Rich Gaspari when he stepped on stage with shredded glutes.

Kai Greene explains that the judging criteria has always been focused on who had the best back, but it seems the new era is now starting to again focus on the smaller waist.

Kai explains that “bodybuilding 101, past tense” was won by the back, even though some athletes had fantastic physiques.

Every athlete during Kai’s competition days were always focused on their back.

With Phil Heath making a comeback, Kai Greene asks the question of how will the judging criteria be for a bodybuilder representing the “old era”.

Basically Kai is referring Phil Heath as the last of the ‘old era’ and him losing to Shawn Rhoden in 2018 was the beginning of the ‘new era’.

The reason for Phil Heath’s defeat was said to be because of his abdominal problem, which in fact, Phil had to have a major operation after the 2018 Olympia Weekend ended.

Will the judges go back to focusing on back development as they did in previous years, or will they stick to the new criteria that propelled Shawn Rhoden and Brandon Curry to victory?

What do you think?