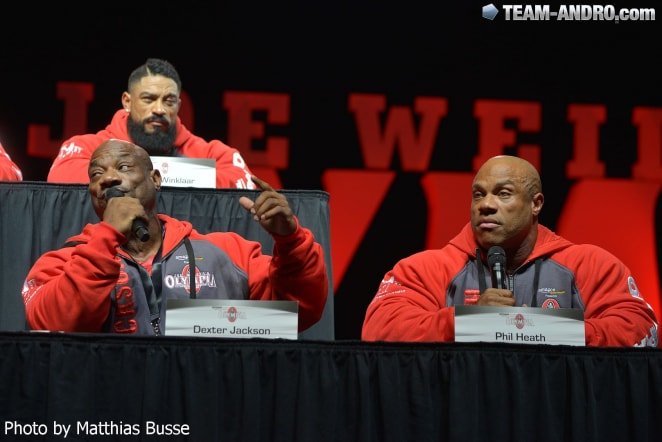 2017 Mr. Olympia Press conference highlights – Just as much as all bodybuilding fans eagerly wait for the bodybuilders to step on the stage, they also look forward to the famous press conference with all the athletes to hear what they have to say.

It was a much better show than last year, more heated exchanges between the athletes.

A number of athletes managed to get at reigning champion Phil Heath.

Big Ramy was more vocal than any other year and he told Phil Heath and the fans that they are going to be very surprised when they see him on stage.

Dexter Jackson was his usual self, but while joking around, he still managed tmake Phil Heath uncomfortable. Mentioning that he beat Phil Heath in all other shows including the Mr. Olympia in 2008. Dexter also said that he took the entire year off to make sure he is at his best for the 2017 edition.

Phil Heath was full of confidence, he also mentioned that everybody should stop mentioning Kai Greene. All the fans should respect all the athletes that are qualified for the contest and not worry about somebody that needed a special invite to make it to the Olympia.

Joshua Lenartowicz made a very heart warming speech, mentioning Dallas McCarver and thanking all the fans and friends for their support.

Finally, Cedric McMillan was his usual self joking around with everybody and as well telling everybody that they should be grateful for being alive and healthy. He also got everybody laughing when he said that Roelly Winklaar looked liked Jesus or Isis.