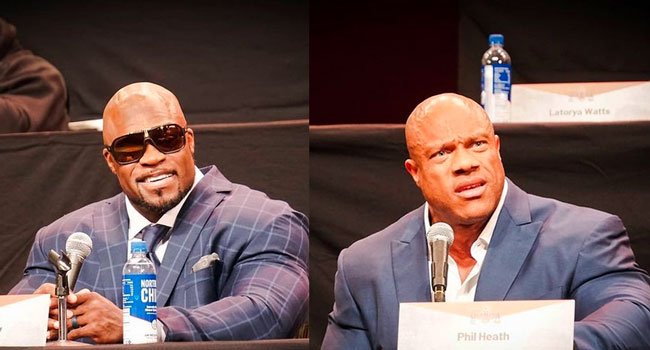 The much anticipated 2020 Olympia press conference took place Thursday afternoon, a day before the professional athletes take to the stage.

This year’s edition of the Olympia Press Conference was slightly downsized due to the Covid-19 safety protocols and the large number of pro competitors qualified to compete at the 2020 Olympia Weekend.

The top stars from each division were selected for the popular press conference.

The focus was on Brandon and Phil Heath, with the fans and media expecting a heated debate.

Brandon Curry took the safe path of being cool and calm to the point of praising all the athletes including Phil Heath.

Brandon explained that he always dreamed of competing directly against Phil Heath after spending so many years witnessing his success.

Now finally, Brandon’s dreams have come true with him as a champion competing against Phil Heath.

Phil Heath on the other hand was more aggressive and to the point.

Looking at Phil was enough to notice that he means business and his words backed up the hype.

Those are the words that set the tone for the contest that is to take place during this weekend.

Brandon Curry will have a great battle on his hands with the likes of Phil Heath, Hadi Choopan, Big Ramy, Dexter Jackson and William Bonac all fighting for the prestigious Sandow trophy.

The competitors all know that a Phil Heath in top condition is practically unbeatable.

Brandon has never defeated Phil Heath and as it looks, Brandon has decided to play the size game, compared to a Phil Heath that looks much more streamlined.

A major part of the focus was also aimed at the legendary Dexter Jackson.

Dexter will be retiring after the 2020 Olympia Weekend. The veteran bodybuilder has a record 29 victories under his belt, including the 2008 Mr. Olympia.

After answering some questions, a very emotional Dexter Jackson, thanked his family, friends, the NPC, IFBB, Jake Wood, Jim Manion, Dan Solomon, his fellow competitors and all his fans.

As many believe and wish Dexter continues to compete for a few more years, Dexter believes now is the right time to retire from competitive bodybuilding at the age of 51.

Not to be brushed aside, Dexter is competing to win and he sent a warning to his fellow competitors that he wants to win his 30th contest and second Mr. Olympia title.